Traveling with the D9and10Sports Gang: The Guys Tackle Pittsburgh 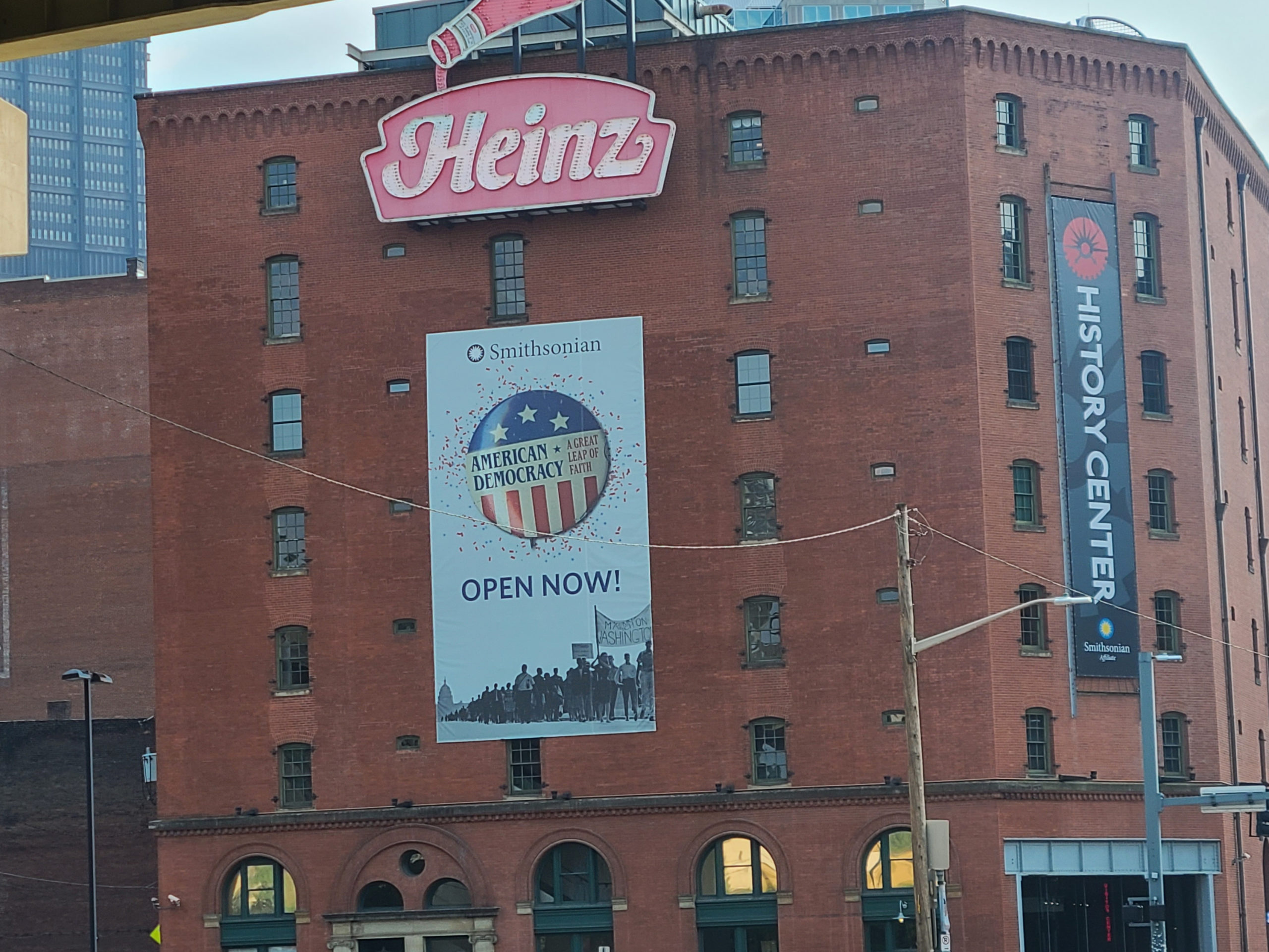 PITTSBURGH – The first stop on our journey was downtown Pittsburgh where Andy and Chris decided to tackle the Senator John Heinz History Center/Western Pennsylvania Sports Museum, Peppi’s in the Strip District, the Rivers Casino and the Pirates’ game at PNC Park.

The journey started at the Heinz History Center/Western Pennsylvania Sports Museum, situated between downtown and the main shops of the Strip District.

Currently, the Heinz History Center has a traveling display from the Smithsonian Institute, “American Democracy A Great Leap of Faith”.

The exhibit details America’s democratic journey, from the Revolutionary War until the present day. It includes rare artifacts and interactive showcases detailing the history of how Americans have voted, protested, and engaged in politics from the beginning until today.

It also details the role that Western Pennsylvania played in helping to shape our democracy.

A voting machine from the mid-to-late 20th Century

Included with your admission to the history center is so much more including permanent displays and the fantastic Western Pennsylvania Sports Museum.

One of the lesser-known permanent displays is a room on the fourth floor that includes artifacts from the different nationalities that helped to settle Western Pennsylvania, everything from German, to Russian, to Scots-Irish and Italian is included in this display, which is hard to match anywhere else in the country as well as Pittsburgh memorabilia.

An area that we didn’t have time to tour chronicles Western Pennsylvania’s history from its earliest days throughout the 21st Century.

The Western Pennsylvania Sports Museum is a museum within a museum chronicling the great sports history of Western Pennsylvania including outdoor sports, professional sports, collegiate sports and high school sports with a heavy emphasis on Pittsburgh’s three pro teams, the Steelers, Pirates and Penguins.

There is also a really cool high school football section including letterman jackets, helmets, and a map displaying many of the quarterbacks from Western Pennsylvania, including East Brady’s own Jim Kelly and Franklin’s own Ted Marchibroda.

The museum has interactive displays that Andy and Chris tried their luck at.

After hitting up the History Center (give yourself at least three to four hours), we took the short walk down into the Strip to get some food. The choices are many, but on this day, we chose Peppi’s, famous for its #7 Roethlis”burger”.

We passed on the Roethllis”burger”, but went with the “Big Nate” (grilled chicken breast, steak provolone cheese and grilled onions) and “The Heath Bar-B-Q” (grilled steak with grilled peppers, onions and barbeque sauce).

We took the food to go and ate at the new tables outside the newly refurbished Produce Terminal on Smallman St.

From there it was time to head to the North Shore.

We parked in the Rivers Casino garage and took the elevator down to the casino (you must be 21 to enter the casino).

After playing a few slot machines (no we didn’t win anything) it was time to make the short walk to PNC Park for the Pirate game.

PNC Park was as beautiful as ever. Our seats were great (little-known fact, with a Giant Eagle advantage card, you can get half of the seats Sunday through Thursday). The Pirates even managed to pull out a win for us.

We highly recommend this adventure for those of you looking for a day trip or a weekend getaway.

What a Ride: The 2020-21 Sports Season Took us All on a Ride for the Ages
Traveling with the D9and10Sports Gang: Y’all Have a Good Time in Florence, Kentucky
This website or its third-party tools process personal data.In case of sale of your personal information, you may opt out by using the link Do not sell my personal information.
×
Manage consent