Traveling with the D9and10Sports Gang: One Step Away from the Bigs, Columbus Combines Best of Both Worlds 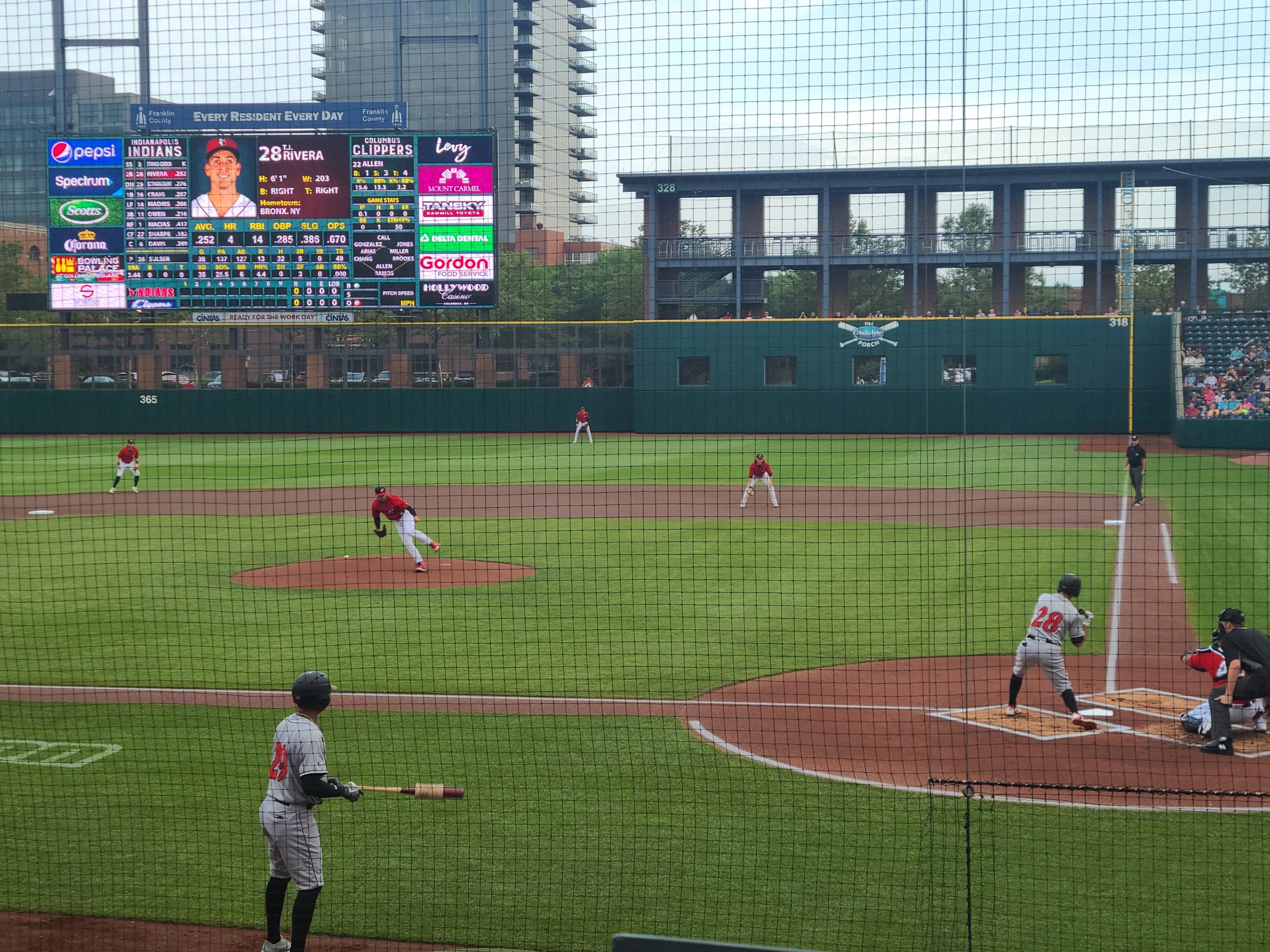 COLUMBUS, Ohio – Huntington Park, home of the Columbus Clippers, has a distinct Major League feel to it.

That makes sense, considering they are the Triple-A affiliate of the Cleveland Indians. It’s a place where top prospects meet career journeymen, making for an interesting mix.

There is some fun in-game entertainment (including a hot dog race), but as you step up the minor league ladder, it becomes less about the entertainment (although there was still plenty) and more about the baseball.

The hot dog race was an exciting one.

Located in the Arena District in downtown Columbus, the stadium has many traditional features, as well as a few unique ones.

Perhaps our favorite is the Hall of Fame Bar in the left-field building. It offers a unique setting with historical tributes to the club, as well as a great view. On the roof, there is seating available, giving fans a truly unique look.

A look from inside the Hall of Fame bar.

A view from atop the Hall of Fame Bar.

The park also features plenty of picnic seating, as well as a small lawn in left field.

The food is delicious and the options plentiful, including traditional favorites like burgers, hot dogs and ice cream, as well as the scrumptious Philly cheesesteak. I had to stop halfway through eating it to make sure I got a picture.

For the over 21 crowd, there are plenty of adult beverage options as well. And both food and beverages alike are very reasonably priced.

A wide concourse wraps itself around the stadium, breaking only in center field. And every seat in the house offers a unique view.

It wasn’t a good night for the home team, as the visiting Indianapolis Indians (the Pirates’ top affiliate) rolled to an 11-1 victory with a pair of 3-run home runs, one courtesy of the recently acquired Dee Strange-Gordon. Columbus’ prospect Owen Miller, a top 10 prospect Cleveland’s organization, broke up the shutout with a solo home run in the ninth inning.

The Indianapolis Indians rolled to an 11-1 win.

Making our way back east, it was an easy drive from Fort Wayne done in just under three hours.

While there wasn’t much to cheer about for the home team during the game, the Clippers did treat fans to a post-game fireworks show, set to the music of Aerosmith.

It was a really nice park with a good atmosphere and good vibes all the way around.

Traveling with the D9and10sports Gang: An Apple a Day ….. Makes for a Fun Stay
Traveling with the D9and10Sports Gang: Calling an Audible to the Pro Football Hall of Fame
This website or its third-party tools process personal data.In case of sale of your personal information, you may opt out by using the link Do not sell my personal information.
×
Manage consent