Traveling with the D9and10Sports Gang: Fly High at the National Museum of the United States Air Force 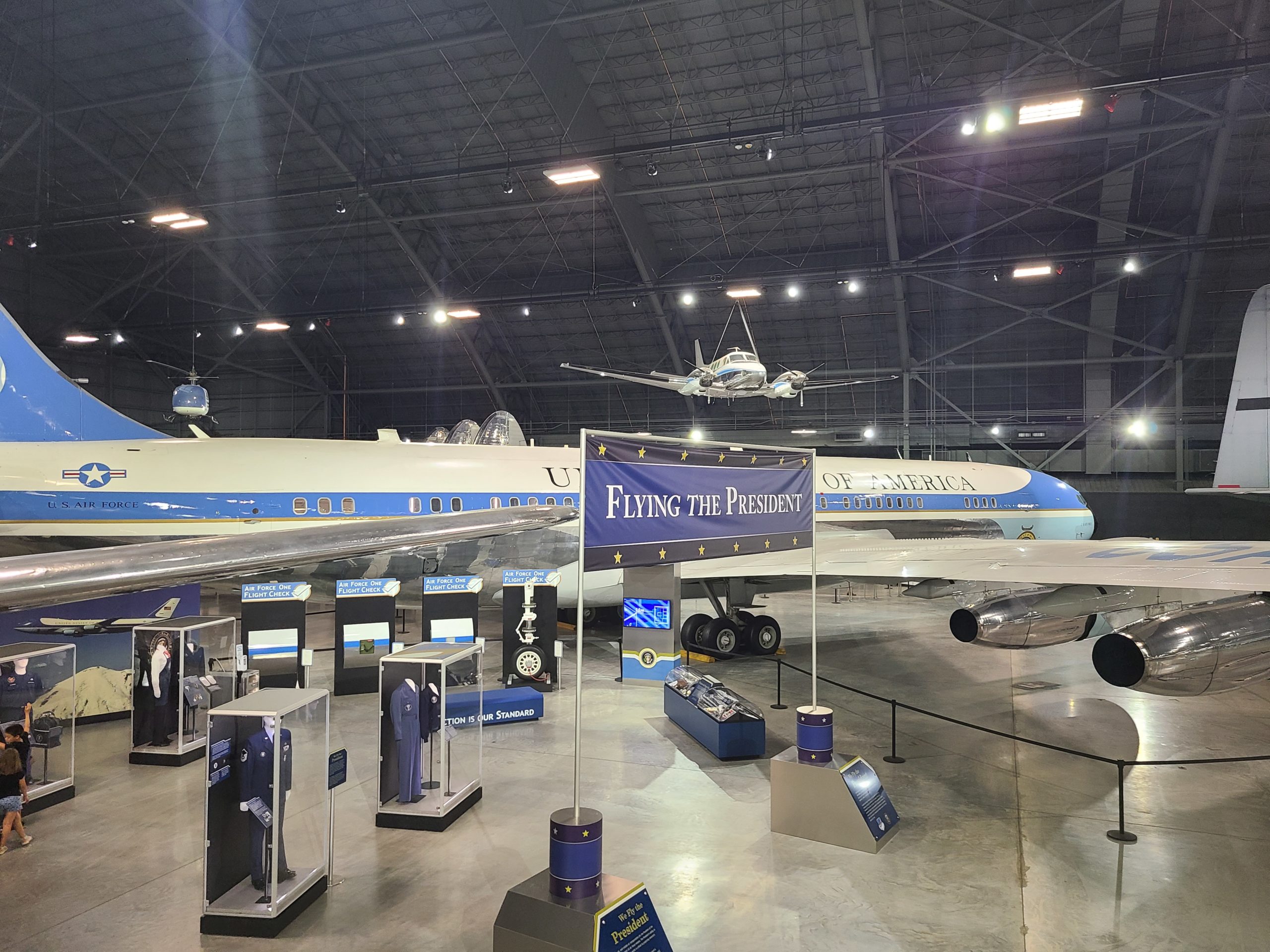 After a year of not being able to go anywhere, the D9andSports crew thought it would be fun to put together some vacation ideas for the great folks in D9 and D10 and what better way to do that than to explore the ideas ourselves. So come along for the ride. It should be fun.

DAYTON, OHIO – A stop in Dayton meant a trip to the National Museum of the United States Air Force, and boy is it a sight to behold.

The oldest and largest military aviation museum in the world, it is located at Wright-Patterson Air Force Base, and you only need to get within shouting distance to see the vastness of it all. And you can see it all, free of charge, just be sure to give yourself a lot of time, because there is a ton to see – more than 19 acres worth of exhibit space in four different buildings to be exact.

Our journey began at the William H. Boeing Presidential Gallery, which allowed us the opportunity to climb aboard Air Force One – literally. The plane, specifically the Boeing VC-137C, carried eight different US Presidents, beginning with President John F. Kennedy. If that wasn’t enough, the Presidential Gallery lets you climb several other presidential aircraft as well (and they are some tight spaces!).

A view from inside the cockpit of Air Force One.

Also located in the fourth building are the Global Reach Gallery, the Research and Development Gallery and the Space Gallery. It’s out of this world. Among the gems here are the world’s only remaining XB-70, which was capable of flying three times the speed of sound.

In the Space Gallery, you can walk onto a full-size replica of a NASA space shuttle payload bay, as well as look inside the cockpit. It also contains spacecraft from the Mercury, Gemini and Apollo programs, as well as a plethora of astronaut equipment.

A space capsule from the Mercury Gemini Space program.

Starting from the fourth building and working our way back, the missile gallery is up next. In a museum full of things that will take your breath away, this one might top them all. Located between buildings three and four, this room contains missiles that can be viewed from the ground level, as well as an upper platform. It’s truly a marvel.

A view looking up in the missile room.

From the missile gallery we made our way through the wars, beginning with the Cold War and moving on to the Southeast Asia (Vietnam) War, the Korean War, World War II, and the Early Years, which includes World War I.

These galleries feature aircraft that span the years of each war, and it truly is amazing to see how the technology has advanced throughout the years and the aircraft changes in size and design.

The Cold War gallery features a wide range of aircraft, including a B-2 Stealth Bomber.

The B-52D and its vastness highlight the Southeast Asia War section which includes aircraft used throughout the conflict.

Andy poses next to a B52, an aircraft that was flown by his grandfather.

A B57B in the Southeast Asia wing.

One thing to note, and it’s important. Apart from seeing the aircrafts, there is also a wealth of information on each, as well as the conflicts themselves. So again, give yourself plenty of time, because you are guaranteed to learn something new, even for the most advanced history buffs!

The World War II gallery features everything from Pearl Harbor to the Doolittle Raids, the aircraft themselves, and so much more. It’s quite literally a walking history lesson. The gallery perfectly captures the pivotal moments of the war and key figures.

An exhibit depicting the Doolittle Raids.

Our final stop of the day was the Early Years gallery. Here, we see the earliest aircraft, beginning with the Wright brothers through World War I and leading into World War II.

A scene in the Early Years showing the Wright brothers.

Okay, so technically our final stop was the gift shop, which was full of cool things to buy.

Again, and this can’t be stressed enough, give yourself a lot of time here. You could easily spend a whole day here (we spent about 4 ½ hours) and still not see everything. It’s out of this world.