Traveling with the D9and10Sports Gang: Calling an Audible to the Pro Football Hall of Fame 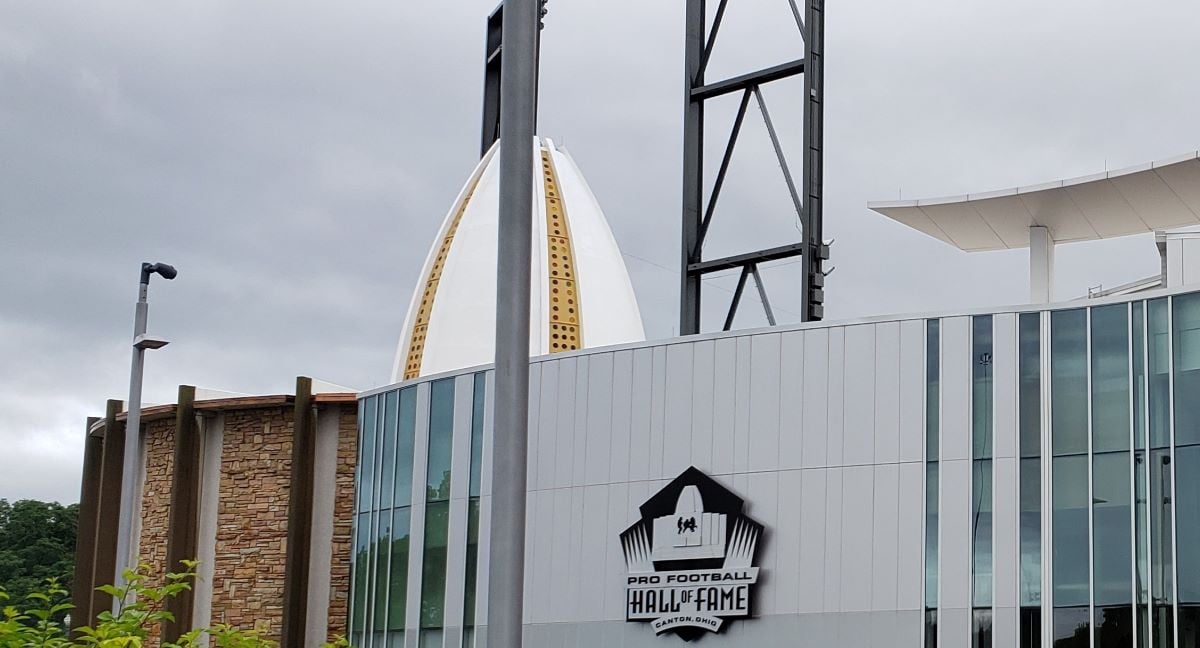 CANTON, Ohio – We had every intention of ending this baseball-themed week with another baseball game.

In fact, we were about an hour or so away from Cleveland, where we planned on watching the Indians take on the Kansas City Royals.

But, Mother Nature had different ideas.

A steady, hard rain that we had been driving through since leaving Columbus forced the postponement of the game.

So we called an audible and headed to the Pro Football Hall of Fame in Canton, Ohio.

The Pro Football Hall of Fame is a great place to see memorabilia from the years gone by. Everything from the original football helmets to old team jackets and uniforms.

A down-marker box from the early days of the NFL

One of the cooler jerseys on display is the Arizona Cardinals jersey of Pat Tillman, who gave up his pro football career after 9/11 to serve in the army and was killed in action in Afghanistan in 2004.

The Pro Football Hall of Fame also a great place to find information on all of your favorite teams – including one board that shows records year-by-year for every NFL franchise. For you Steelers fans, the Steelers have had just seven losing seasons since 1972, that’s seven losing seasons in 49 years.

There is a lot of flavor for local football fans as well.

The Steelers, of course, are heavily featured considering they were the first team to six Super Bowl championships.

But don’t fret Browns, Bills, and Eagles fans. You have plenty to see as well.

A Cleveland Browns jacket from the middle of the 20th century

Eagles vs. Browns program and Otto Graham award belt. Graham was the quarterback for the Browns in the 1940s and 1950s

Philadelphia Eagles certificate of acceptance into the NFL in 1933

East Brady’s own Jim Kelly, who took the Bills to four Super Bowls, is also heavily featured with everything from his Bills’ jersey to a one-of-a-kind motorcycle with a special Jim Kelly Hall of Fame Logo that is signed by Evel Knievel and Robert Knievel that was given to Kelly in 2008 and was subsequently taken to the Hall of Fame to Kelly’s Houston Gambler’s USFL uniform.

For you gamers out there, there is also a display of every Madden cover ever made from 1988 through 2013 including the first one in 1990 featuring Madden himself to the 2013 version featuring Calvin Johnson, Jr.

There are also a few displays for women in pro football, including the historic game last season between the Browns and the Washington Football Team. Each team had a female coach and a female referee officiated in the game.

The major highlight of the Pro Football Hall of Fame is the room with all of the Hall of Fame busts in it. It is quite a sight to see and is something that no true football fan wants to miss. Every player, coach, executive to be inducted into the Pro Football Hall of Fame has a bust with his likeness on it. The display starts with the first class in 1963 and goes through the upcoming 2020 and 2021 classes (although not all the busts are out yet for the 2020 and 2021 classes – the 2020 class was delayed a year because of the COVID-19 Pandemic).

Thanks for joining us on our adventures this past week. We hope you enjoyed it.

Traveling with the D9and10Sports Gang: One Step Away from the Bigs, Columbus Combines Best of Both Worlds
Chris’ Random Thoughts: Hard Work in Summer Leads to Titles; D9 Should Follow D10 Playoff Lead
We use cookies on our website to give you the most relevant experience by remembering your preferences and repeat visits. By clicking “Accept All”, you consent to the use of ALL the cookies. However, you may visit "Cookie Settings" to provide a controlled consent.
Cookie SettingsAccept All
Manage consent