Traveling with the D9and10sports Gang: An Apple a Day ….. Makes for a Fun Stay 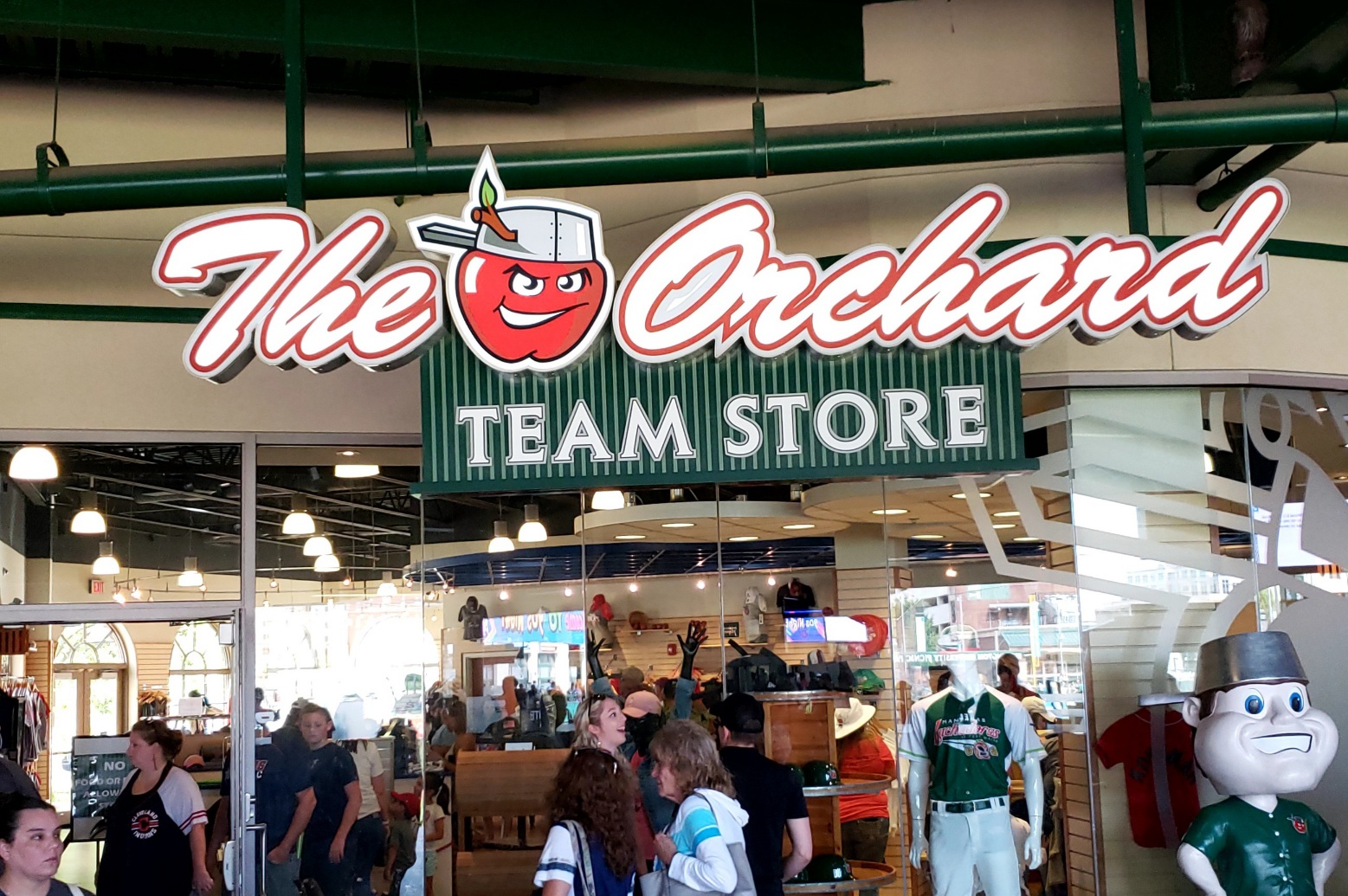 FORT WAYNE, Ind. – Fireworks, Kids Run the Bases, and 90s Night were the highlights in Fort Wayne, Ind., where the team is named in honor of Johnny Appleseed.

The so-named TinCaps get their moniker from the fact John Chapman, who is buried in Fort Wayne. Chapman was better-known as Johnny Appleseed. In 1948 Disney made a fictional movie “Johnny Appleseed” with Johnny wearing a cooking pot as a hat, thus the TinCaps.

It is one of the more unique nicknames in pro sports and its merchandise goes quickly as attested to by how many logo shirts were sold out in the team store.

The stadium is nice and is another park with a nod to the Wrigley Field rooftop bleachers.

The park also features a ton – and we do mean a ton – of group picnic seating down both lines.

One of the unique features is the tiered lawn seats in right field.

The park is adjacent to two hotels – a Courtyard by Marriot and a Hampton Inn & Suites. We stayed at the Courtyard making for a convenient minute walk into the ballpark.

A view from our hotel room looking into the stadium

Inside the park the best feature may have been the food with a pretty good pulled pork sandwich highlighting the main courses.

But what really set it apart was the unique dessert option of honest-to-goodness apple pie a’ la mode. I had never seen that at a ballpark before, and it was really good.

Another unique food option was applesauce cups, most likely a hit with the younger crowd.

It was a fireworks night, and for a minor league show it was a pretty good show.

It was also 90’s Night, although outside of the music and a couple of young staff guys wearing pants right out of the late 80s there wasn’t much to it.

Overall, it was another nice park within an easy day’s drive.

Before getting to Fort Wayne we toured the history museum and the Studebaker Museum in South Bend, Ind. (they are connected).

The history museum was decent with a cool display on the All-American Girls Professional Baseball League (made famous by the movie “A League of Their Own”).

There was also a display of mid-to-late 20th Century memorabilia, some of which made me feel old because I either owned it or still do.

The Studebaker Museum was cool, even though I am not a huge car guy.

Perhaps some of the coolest pieces weren’t cars at all but carriages, which is how the company started.

We also drove through the campus at Notre Dame and saw faned Notre Dame Stadium and Touchdown Jesus.

Traveling with the D9and10Sports Gang: First-Class South Bend Cubs Offer Something For Everyone
Traveling with the D9and10Sports Gang: One Step Away from the Bigs, Columbus Combines Best of Both Worlds
This website or its third-party tools process personal data.In case of sale of your personal information, you may opt out by using the link Do not sell my personal information.
×
Manage consent