Traveling with the D9and10sports Gang: A Fire-Breathing Great Time in Dayton 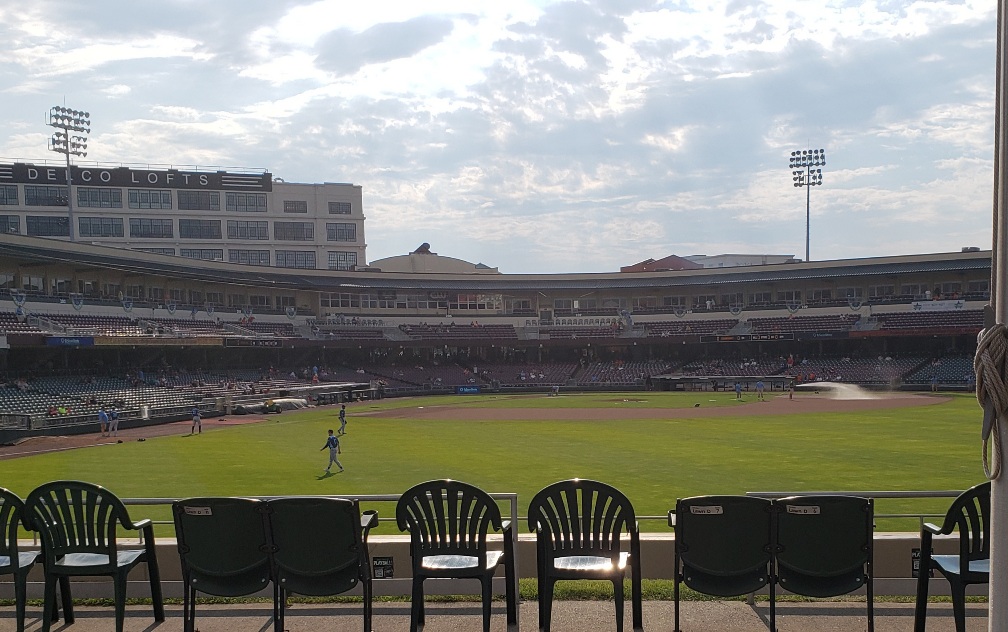 DAYTON, Ohio – There is a big league feel to a minor league park in Dayton, Ohio.

Day Air Credit Union Ballpark is all about the baseball, and the fans dig that.

The home park of the High Class A Dayton Dragons has the look and feel of a big league park and the fans have routinely filled the park to capacity since the team came to town in 2000. In fact, they had a sell-out streak of 1,385 consecutive games through the end of the 2019 season, a pro sports record.

With no season last year and some restrictions to start this season because of the pandemic, the streak is technically over (the Dragons are saying this season doesn’t count having announced before the year that the 2021 season has been interrupted by the pandemic, and they will resume counting the sellout streak in 2022 – not really sure you can just make up your own rules, but hey this is minor league baseball so maybe you can)

While the stadium wasn’t sold out Wednesday, there was still a nice crowd of 5,548 on hand for a showdown with West Michigan – those Erie Seawolves fans might take interest in the fact the Whitecaps are a step below Erie in Tigers’ organization.

And when we say it’s about baseball we don’t kid.

There were very few of the “normal” minor league things like in-between inning contests – there were some but not overdone.

What there is are quasi-major league amenities like a party deck in left field and a walk-in bar on the concourse in right.

The scoreboard out in left has a major-league feel to it as well.

Add in the warehouses just outside the ballpark in left and right and you may think you are at Petco Park in San Diego or Camden Yards in Baltimore.

The apartments out beyond centerfield give it a Rodgers Center in Toronto feel as well (we checked, we can’t afford the rent).

Of course, Day Air Park does have your obligatory lawn seats with kids playing catch and families sitting enjoying the game.

But the thing you notice immediately is the fans care about this team and cheer, boo, and root like you were at a nearby Cincinnati Reds game – which the players hope to someday get to.

On this night, the home team gave the fans plenty to cheer for early jumping out to a 6-1 lead after three before holding on for a 6-5 win.

As for names you may recognize, former Pirate Daryl Ward is the hitting coach for Dayton while current Tampa Bay Ray outfielder Austin Meadows has a brother, Parker, playing for West Michigan. Parker showed off some of that family power with a homer to right in the fourth – he resembles his brother’s left-handed batting stance.

Overall, this is a must-see park for baseball enthusiasts.

Traveling with the D9and10Sports Gang: Y’all Have a Good Time in Florence, Kentucky
Traveling with the D9and10Sports Gang: Fly High at the National Museum of the United States Air Force
We use cookies on our website to give you the most relevant experience by remembering your preferences and repeat visits. By clicking “Accept All”, you consent to the use of ALL the cookies. However, you may visit "Cookie Settings" to provide a controlled consent.
Cookie SettingsAccept All
Manage consent