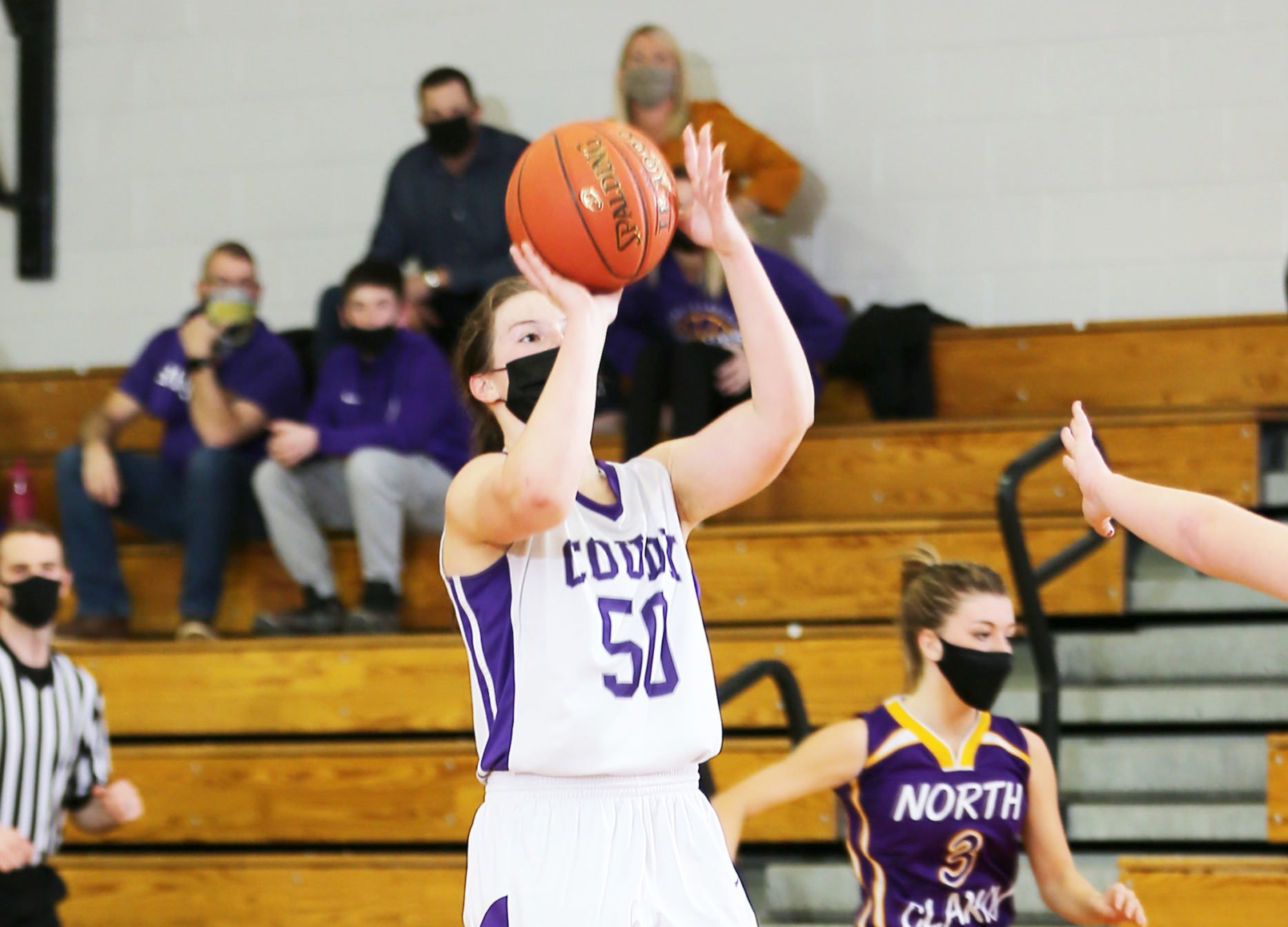 Point guard Liz Frame left the game with an ankle injury in the second quarter and leading-scorer Sarah Chambers picked up her third foul early in the third quarter.

In the face of it, the Lady Falcons turned to their defense to hold off a feisty North Clarion team, 34-31.

“We’ve been in some games like this year and last year,” said Coudersport coach Bob Tingley. “These kids have been in these tough situations and have a feel for what you have to do.”

The Lady Falcons (18-1) led by seven at halftime, 27-20. Those seven points also equal the amount they scored in the second half. But they made it hold up thanks to the aforementioned defense.

A bucket from Chambers made it 31-24 early in the fourth quarter, but North Clarion (8-7) clawed its way back and eventually got the lead down to two, 33-31 on a Trinity Thompson bucket with 48.2 seconds to go.

The She-Wolves twice had a chance to tie the game in the final minute.

Roz Page missed the front end of a 1-and-1 for Coudy with 38.1 seconds to go, but Emma McFarland’s contested layup on the other end was off.

Chambers was then fouled and made 1-of-2 from the line with 20.3 seconds to go and NC’s Gwen Siegel had a look at a 3 on the ensuing possession, but it went off the back of the iron and the Lady Falcons were able to corral the rebounds and secure the win.

Chambers talked about the win afterward:

“I expected it to be tough,” Tingley said. “I didn’t have a lot of scouting on them, I had some. They looked bigger out here on the floor than they did on tape. And they’re well-coached. Terry (Driehaup) does a good job.”

The second half was a stark contrast to the opening 16 minutes, which saw both teams click offensively.

North Clarion actually led, 12-11 at the end of the first quarter, with Siegel, Claire Kriebel and Emily Aites scoring four points each.

Frame had the hot hand for the Lady Falcons early, scoring seven points in the first quarter.

The injury came at the 7:13 mark of the second quarter after she stole the ball and was fouled going in for a layup.

“When we first saw her go down it’s kind of like ‘darn it,’ because she was playing really well,” Chambers said. “When she went down we realized how hard we were going to have to step up for how hard she was playing and play hard for her.”

One of those players that stepped up was freshman Sierra Myers, who seemingly couldn’t miss. Myers shot Frame’s free throws after Frame left the game and made both. She proceeded to make three jumpers in the second quarter, that coupled with a 3 from Belle Porterfield and a bucket from Page extended the lead to 24-18.

Lauren Lutz trimmed the lead to four with a layup, but Chambers came down and drilled a 3 give Coudy its seven-point advantage at the break.

Coudersport advances to play Port Allegany in the semifinals on Saturday.

“This year, with only one representative coming out of District 9, it makes each game even more important,” Tingley said.

March 11, 2021 District 9 Playoff Basketball Scores
Wire-to-Wire: Falcons Fly Past Keystone, Into D9 Class 2A Title Game
We use cookies on our website to give you the most relevant experience by remembering your preferences and repeat visits. By clicking “Accept All”, you consent to the use of ALL the cookies. However, you may visit "Cookie Settings" to provide a controlled consent.
Cookie SettingsAccept All
Manage consent