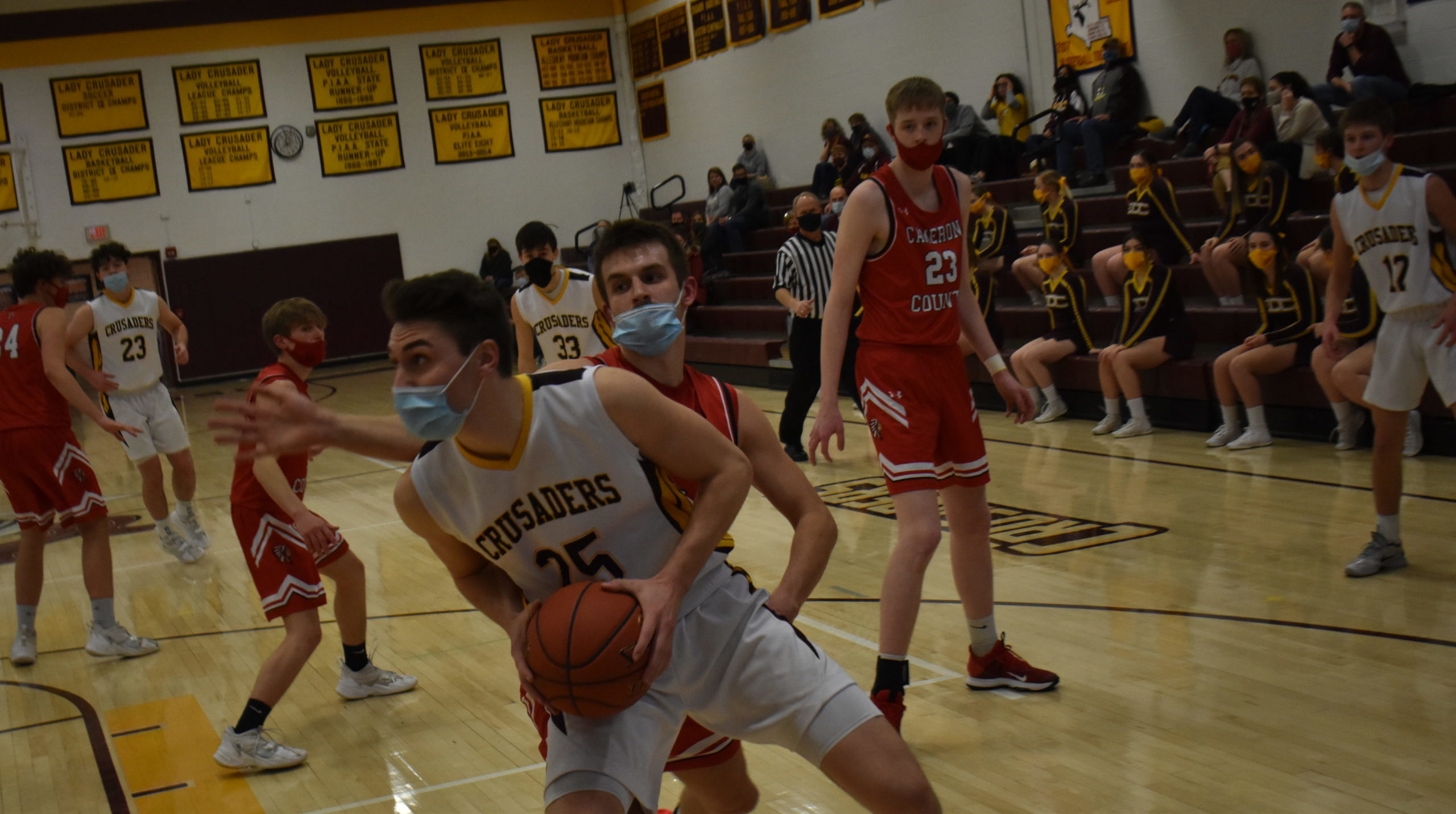 ST. MARYS, Pa. – The top-seeded Crusaders got a career-high 24 points from Mason McAllister on their way to a 61-48 win over eighth-seeded and visiting Otto-Eldred.

McAllister was one of three ECC players to reach double digits with Charlie Breindel adding 12 points and Mark Kraus 10.

ECC started fast and led 19-8 at the end of the first quarter thanks to seven points from McAllister. The Crusader lead grew to 14, 35-21, by halftime with Kraus scoring six second-quarter tallies.

ECC will host fourth-seeded Clarion at 7 p.m. Friday in the semifinals.

The game was tied at six after eight minutes before the Red Raiders used three 3-pointers – one each from Dylan Guisto, Caden Beldin, and Hayden Brown – to open up a 22-16 halftime lead.

Camdyn Allison then caught fire in the third quarter scoring 10 of Cameron County’s 12 points while hitting a pair of 3-pointers to help the Red Raiders lead grow to 10, 34-24, going to the fourth quarter.

Cameron County will host third-seeded Johnsonburg in the semifinals at 7 p.m. Friday.

The Rams trailed 26-25 going to the fourth quarter but got six points apiece from Stelene and Watts to outscore the Golden Knights 16-5 in the quarter.

That completed a strong second half for Johnsonburg, which was held to 11 first-half points and trailed 15-11 at the break.

But Eric Christoff and Ethan Wells each hit third-quarter 3-pointers, and Christoff scored seven points in the quarter to help close the gap to a single point.

Watts and Stelene each scored 12 points to lead the Rams with Christoff adding nine.

Johnsonburg will travel to second-seeded Cameron County for a 7 p.m. semifinal game Friday.

CLARION, Pa. – Trailing by six points after the first quarter, fourth-seeded Clarion exploded for 33 second-quarter points and never looked back on its way to a 78-58 win over visiting and fifth-seeded A-C Valley.

A-C Valley led 20-14 at the end of the first quarter thanks to eight points from Levi Orton, who scored a game-high 32 points.

But Clarion got eight points apiece from Beau Verdill and Hunter Craddock, seven from Chrisitan Simko, and six, on a pair of 3-pointers, from Ethan Burford in the second quarter to take a 47-34 halftime lead.

Verdill, who had a team-best 27 points to go with 11 rebounds and five assists, continued to pour in the points in the third quarter adding eight more to help Clarion keep A-C Valley at length getting the advance to as many as 20 in the quarter.

The Falcons didn’t go away, though, and ended up outscoring the Bobcats, 19-16, in the third quarter to get back within 10, 63-53, going to the fourth quarter with Orton scoring nine more third-quarter points.

But the hole was too deep and the energy expanded too much, as Clarion outscored A-C Valley 15-5 in the fourth quarter to put the game on ice.

Clarion will travel to top-seeded ECC for a 7 p.m. semifinal game Friday.

March 10, 2021 District 9 and District 10 Playoff Basketball Scores
March 10, 2021 D10 2A, 3A, 5A Girls’ Playoff Recaps: Lakeview Upsets Mercyhurst Prep; West Middlesex Outlasts Saegertown; Slippery Rock Tops Grove City
We use cookies on our website to give you the most relevant experience by remembering your preferences and repeat visits. By clicking “Accept All”, you consent to the use of ALL the cookies. However, you may visit "Cookie Settings" to provide a controlled consent.
Cookie SettingsAccept All
Manage consent