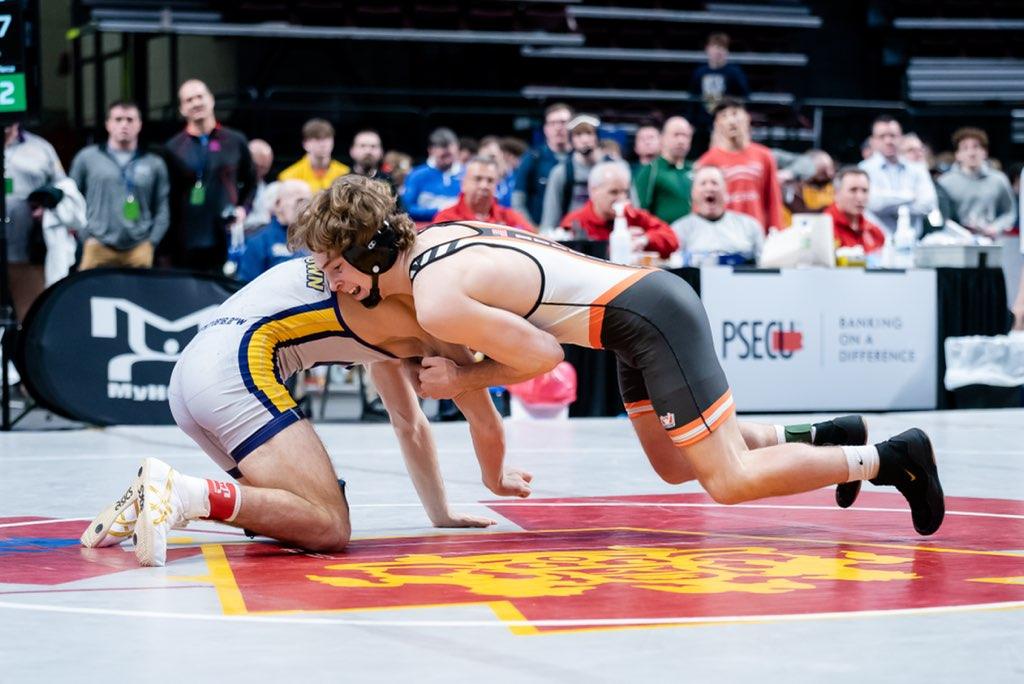 Gill began his championships with a first-round pin of Mount Union’s Mason Beatty, followed by a 6-3 decision against Ayden Smith of Notre Dame-Green Pond. In the semifinals, he got a 15-0 tech fall in 4:18 against Cole Hubert of Saucon Valley before falling in the title match to Aaron Seidel of Northern Lebanon. The sophomore finished the season with a record of 42-2.

Palmer, a senior, started the championships with a 17-1 tech fall in 3:57 against Noah Doi of Camp Hill, followed by an 11-6 decision over South Williamsport’s Robert Gardner. In the semifinals, he edged Kaden Millheim of Warrior Run before dropping a 9-2 decision against before dropping a 9-2 decision to Scott Johnson of Muncy in the final. Palmer finished the season with a record of 34-8.

Brookville’s Reinsel started his championship run with a 16-0 tech fall in 3:58 against Peter Chacon of Montour before a hard-fought 3-0 quarterfinal win over Ethan Kolb of Benton. In the semifinals, the senior Reinsel got a thrilling 2-0 sudden victory over Southern Columbia’s Mason Barvitskie, setting up a showdown with Notre Dame-Green Pond’s Brandan Chelstos, which ended in a 1-0 decision. Reinsel finished the season at 44-3.

At 138, Pierce, a senior, entered with an unbeaten record and began with an 11-5 decision over Kole Biscoe of Southern Columbia, followed by a 10-2 quarterfinal triumph over Boling Springs’ Kobin Karper. In the semifinals, he won by tech fall, 16-0 in 3:32 against Ambrose Boni of Central Valley before falling 5-1 in the title match to Ryan Crookham of Saucon Valley. He finished with a record of 37-1.

Karpinski, a senior who also entered with an unbeaten record, got a 10-0 major decision over Noah Foltz of Bald Eagle in the first round before a third-period pin against Ty Csencsits of Saucon Valley in the quarterfinals. In the semis, he earned a hard-fought 8-5 win over Patrick Cutchember of Quaker Valley before dropping a 5-1 decision to Isaac Cory of Montoursville in the final. He finished with a record of 41-1.

In 3A, Smith began his run at 152 with a 4-3 first-round decision over William Morrow of North Penn. In the quarterfinals, he earned an 8-3 decision over Griffin Gonzalez of Lebanon, and in the semis defeated Kelin Laffey of Pine-Richland via a 4-2 decision. That set up a showdown against Dylan Evans, with the Chartiers Valley senior earning a 3-2 decision. Smith, a senior, finished with a record of 31-4.