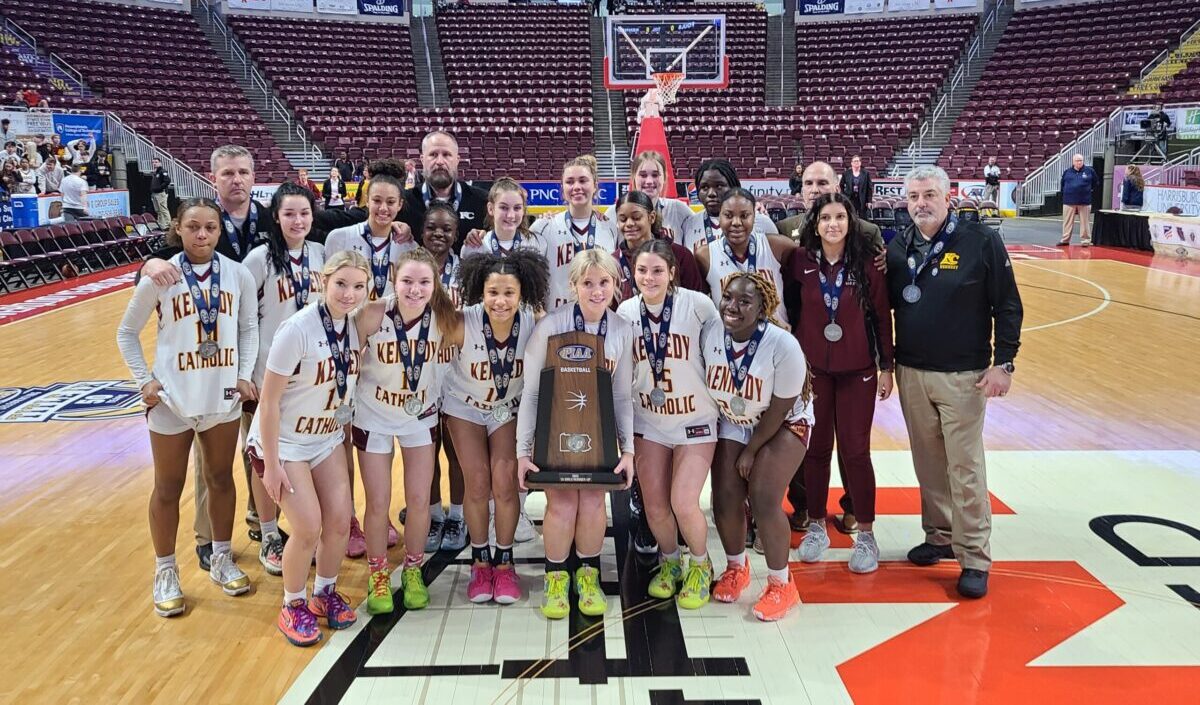 Reaching the top of the mountain in any sport is incredibly difficult, but so is simply getting there.

For Redbank Valley football, they made history not just for District 9, but for themselves also. With their 23-14 win over Bishop Canevin in the PIAA Class 1A semifinals, joining 1989 Keystone and 1992 Smethport.

For Redbank, their run to Hershey actually began in humbling fashion with a 22-20 loss to Keystone in the season opener. They followed up with 13 straight wins to get to the mecca of high school football in Pennsylvania. They won all of their remaining regular season games by double-digits.

In the postseason, they showed their resiliency, beginning with a 35-14 D9 semifinal win over Port Allegany in a game they trailed 14-0. In the title game against Union/A-C Valley, the Bulldogs led 21-0 before the Falcon-Knights rallied to tie the game at 21-21, but a touchdown with just over five minutes remaining gave the Bulldogs the crown.

In the PIAA quarterfinals, the Bulldogs again found themselves trailing by scores of 7-0 and 14-7 against District 5 champion Northern Bedford, ultimately winning 21-14. In the semifinals against Canevin, the Bulldogs trailed 14-7 and Canevin was threatening, but Chris Marshall’s 98-yard interception return was capped by another rally that was punctuated by a Joe Mansfield safety to send the Bulldogs to Hershey, where they came up just short against Bishop Guilfoyle, 21-14.

The Kennedy Catholic girls, meanwhile, were making their first appearance in a state championship game since 2011.

The Golden Eagles put together a dominant regular season, with their only two losses coming to bigger schools in Norwin and Villa Maria. All but one of their regular season victories came by double-digits. They entered the PIAA playoffs with a record of 21-2 after a 67-39 win over Farrell in the D9 Class 1A championship game.

Their postseason run was almost equally as dominant, scoring wins over North Clarion (60-23), Shanksville-Stonycreek (55-29), and Otto-Eldred (77-30) before a 51-45 semifinal win over Portage. It was a game in which Kennedy led 41-27 with just over four minutes to play before holding off a furious Portage rally. It was a game in which senior Bellah DiNardo and freshman Layke Fields scored 22 and 19 points respectively. It was also sweet for the Golden Eagles as their 2020 season was cut off in the PIAA quarterfinals due to COVID-19, a team many believed could have made it to Hershey

And while they came up just short in a 66-54 loss to Northumberland Christian in the PIAA, it was a season for the ages.

For DuBois Central Catholic softball, 2022 marked a return to the PIAA Class 1A championship game after making it in 2019 as well.

The Lady Cardinals. put together another dominant regular season, with their only two losses coming to St. Marys on April 28 and DuBois on May 14. Thirteen of their regular season wins saw them score double-digit runs.

A hard-fought 4-3 win over Elk County Catholic in the D9 semis was followed by a 10-0 triumph in five innings over Forest Area in the title game.

In the PIAA playoffs, DCC scored first-round and quarterfinal wins over Greensburg Central Catholic (4-2) and nemesis West Greene (8-2) before a showdown with Saegertown.

In the PIAA semifinals against Saegertown, the two teams were locked in a scoreless tie until the bottom of the sixth, when DCC scored four runs. Back-to-back-to-back-to-back singles by Emma Suplizio, Kayley Risser, Savannah Morelli, and Madi Hoyt after a leadoff walk to Kali Franklin fueled the rally.

The Lady Cardinals rode that offense, as well as the 1-2 punch of Melia Mitskavich and Morgan Tyler in the circle to the championship game. While they fell short against Montgomery, 5-1, it was nevertheless another season for the books.

Meadville boys volleyball, meanwhile, has been on a remarkable run, with their only two losses in the last two seasons both coming to Lower Dauphin in the PIAA Class 2A title match.

The Bulldogs looked poised to win the title after a 25-18 third-set win put them up 2-1, but Dauphin rallied, taking the fourth and fifth sets by scores of 25-20 and 15-6. The Bulldogs won the title in 2019, as the senior class went to the title match in all three years (there was no 2020 championship due to COVID 19). Jackson Decker finished with 30 kills in the title match, while Julian Jones had 11 kills and six digs and Cameron Schleicher six kills as the Bulldogs ended the season 20-1.