Top 25 Countdown No. 9: Starr-Studded Shot Lands Among Top Plays on the Worldwide Leader in Sports 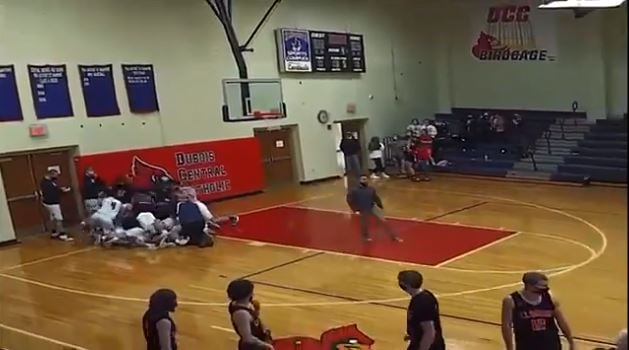 D9and10Sports.com is counting down what we believe are the Top 25 moments/games/performances of the 2020-21 high school sports season in District 9 and District 10. Full Top 25 List To Date Every athlete dreams of making a play worthy of being featured on SportsCenter. And for those who play basketball, they have at one point or another imagined themselves hitting a shot at the buzzer to win a game. DuBois Central Catholic’s Harrison Starr killed two birds with one stone this winter. On Feb. 25, his buzzer-beater was anything but conventional. The DCC standout drilled a shot from beyond half court, a 55-footer as the final horn sounded to stun Clarion, 65-64. Not long after, thanks to a big social media push, Starr and the DuBois Central Catholic faithful got to celebrate again as the shot was No. 2 on SportsCenter’s Top 10 plays of the night. High school moments have been featured on the show before, but they are rare, so for Starr’s shot to make it shows you just how special it was.

The shot one-upped Clarion star Cal German, who drilled a 3 with just seconds remaining to give Clarion a 64-62 lead. There was also some luck involved as well, with Clarion’s Beau Verdill tipping Dante Armanini’s inbound pass. But Starr tracked it down, set himself with a dribble, and heaved the ball into the back of the net. It capped a dramatic comeback for DCC, which trailed by 10 going into the fourth quarter. It is a play for ages to be sure, and one that will forever be remembered for its appearance on the worldwide leader in sports.

Top 25 Countdown No. 10: Villa Maria Dominates the State in Fall, Winter Seasons
Top 25 Countdown No. 8: ECC’s Straub Reaches Another Remarkable Milestone With 900th Win
We use cookies on our website to give you the most relevant experience by remembering your preferences and repeat visits. By clicking “Accept All”, you consent to the use of ALL the cookies. However, you may visit "Cookie Settings" to provide a controlled consent.
Cookie SettingsAccept All
Manage consent