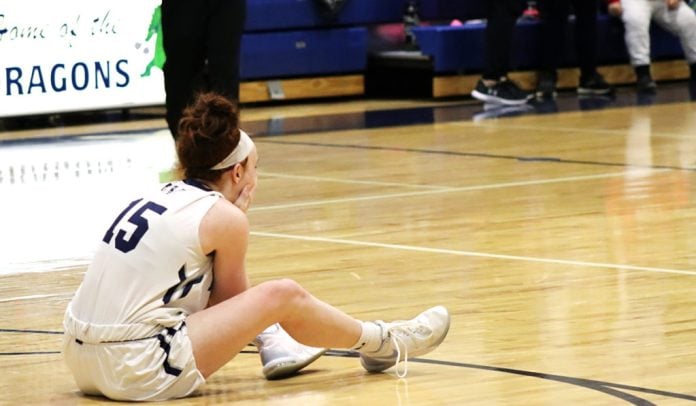 Kids often emulate game-winning moments, the walk-off grand slam, the buzzer-beating 3-pointer or the touchdown pass on the final play to win the championship.

“What if we get a chance to win it at the free throw line?”

Ruhlman got the chance to turn that scenario into a reality.

After grabbing the rebound on a missed free throw with under five seconds to play, she dribbled up the court and put up a 3-pointer just before the final buzzer. The shot didn’t fall, but Ruhlman was fouled on the play and stepped to the free throw line with no time left on the clock.

Warren trailed Slippery Rock, 39-37, and Ruhlman had three shots with the title in the balance. If she made less than two, the Lady Dragons’ season would be over. If she made two the game would head to overtime. If she made all three Warren would be able to add more hardware to its trophy case.

Ruhlman hit the first, then buried the second. Finally, she hit nothing but net on the third and had just enough time to take a seat on the court before being mobbed by her teammates in celebration of the program’s third D-10 championship, a thrilling 40-39 victory.

The matchup between Warren and Slippery Rock was much anticipated and lived up to the hype. There were three ties and three lead changes in the fourth quarter alone.

Slippery Rock’s Bronwyn McCoy put in a layup with 1:58 left that tied it at 37-37. It looked like Riley Childress had given the Dragons the lead with 25 seconds left, but her layup was waved off as she was called for a charge on the play.

Slippery Rock went quickly down the floor and Hallie Raabe found Kelly Benson open underneath for an easy layin and a 39-37 lead.

Ruhlman missed on a floater at the other end and fouled Benson on the rebound. With the Rockets in the bonus, Benson headed to the line for a one-and-one. Benson missed on the front end and Ruhlman collected the rebound to set up the final sequence.

Slippery Rock’s defensive gameplan, find a way to slow down Ruhlman and Childress, nearly worked to perfection. The Lady Rockets held the Lady Dragon’s top two scorers without a field goal in the game. The pair combined for just 12 points, less than either of their individual per game averages, with all 12 coming from the free throw line.

The game, and its finish, was the talk of the District 10 and District 9 basketball world that Saturday. By the time the D9 Class 2A boys’ championship game, which featured a similarly close ending, tipped off in Karns City a couple of hours later, the fans there were still talking about Warren’s victory.