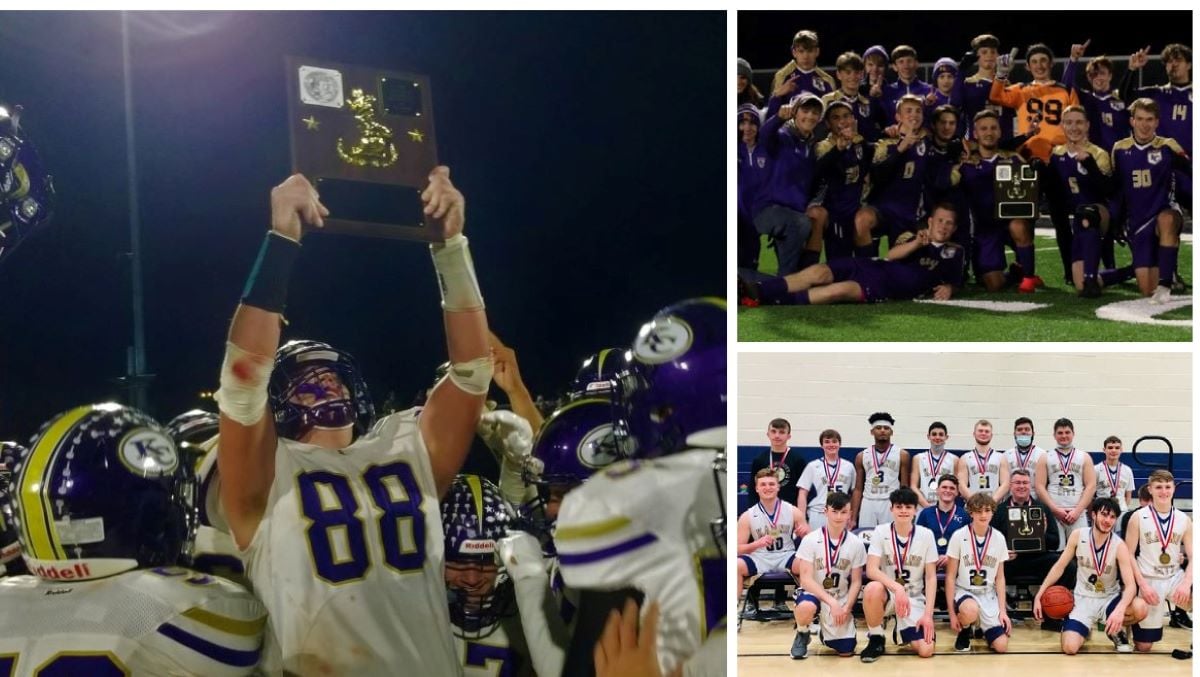 Karns City took home three of the big prizes in District 9 in boys’ athletics in 2020-21 winning the Class 2A football title, the Class 2A soccer title, and the Class 2A basketball championship.

But they weren’t easy feats, as the Gremlins had their fans on the edge of their seats in all three contests.

Flashback to the football title game against heavily favored Brookville.

The Raiders had beaten Karns City, 44-0, in the regular season, and Brookville entered the title game a Varischetti Field in Brockway a perfect 7-0 coming off a 49-15 win over two-time defending champion Ridgway, who had won four total titles in a row.

But in the title game, Karns City’s defense came alive holding Brookville, which entered the game averaging 453 yards per game, to a season-low 218 yards.

That defensive effort allowed the Gremlins to stick around.

Trailing 14-7 at halftime, Karns City got within a point, 14-13, when Luke Garing scored on a 1-yard run with just over a minute left in the third quarter. But a trick play on the conversion after the touchdown failed.

The decision to try the trick play for two instead of using the leg of the always reliable Owen Colwell to tie the game looked like it was going to cost Karns City a championship when Kaden Schere lost a fumble on a punt return at his own 29-yard line early in the fourth quarter.

Brookville gained nine yards on the first two plays and looked like it was about to take at least a seven-point lead.

On third-and-1 from the 20, Waltman blew through the line stopping Robert Keth for a 2-yard loss on third down, and then on fourth-and-3 from the 22-yard line, Waltman and Cole Coon stopped Keth for a yard loss.

Karns City’s offense couldn’t do anything, though, and Brookville got the ball back driving inside the Gremlins’ 40-yard line again.

Again it was the defense coming up big, this time Zach Blair sacking Robert Keth on a fourth-and11 play to give the Gremlins the ball back at their 42-yard line with 5:49 to play.

That’s when the Karns City offensive line took over.

The Gremlins drove to the Brookville 11-yard line the old-fashion way – up the middle, on the ground.

The biggest play of the drive, though, came on the outside.

Facing fourth-and-3 from the Brookville 22-yard line, Scherer lined up in the Wild Cat and went around the left end for 10 yards and a first down.

Coon then set up field position for Colwell, who booted a game-winning 27-yard field goal with 4.7 seconds left – following two timeouts – to secure Karns City’s 15th D9 title and its seventh since 2012 with a 16-14 win.

The soccer title game was more of the same drama.

Against a Punxsutawney team that had beaten it, 3-0, the year before, Karns City found itself in a scoreless tie three-quarters of the way through the contest.

McCully took a touch pass from Braeden Rodgers, and put the ball in the net to give the Gremlins a 1-0 lead.

Rodgers started the play by taking an initial shot that was mishandled by Chucks’ goalkeeper Jacob Ebel leading Rodgers to get his own rebound where he made a nice touch pass for McCully to finish the play.

The KC defense did the rest securing the 1-0 victory.

Keeping its fans nervous was something that continued into basketball season when the top-seeded Gremlins hosted second-seeded Coudersport in a winner-moves-on-loser-goes-home title game.

The visitors looked like they were going to walk to the title taking a 15-point lead in the first half while maintaining an 11-point advantage, 42-31, with 6:15 left in the third quarter

But Karns City went on an 18-4 run to go to the fourth quarter up 49-46. A Chase Beighley deep 3-pointer with 2:12 left in the gave the Gremlins the lead for good, 47-46, but it wasn’t without its scary moments for KC fans in the fourth quarter.

Up four with under 15 seconds left, Karns City watched Coudersport’s Christian Furman nail a 3-pointer with 10 seconds left to make it a 65-64 game.

Two free throws by Karns City made it 67-64, but Coudersport’s Hayden Keck was fouled shooting a 3-pointer with 1.2 seconds left.

The 1,300 career-point scorer for the Falcons missed the next free throw forcing him to intentionally miss the third, which he did. But the ball deflected out toward halfcourt on the rebound giving Karns City the title, 67-65.