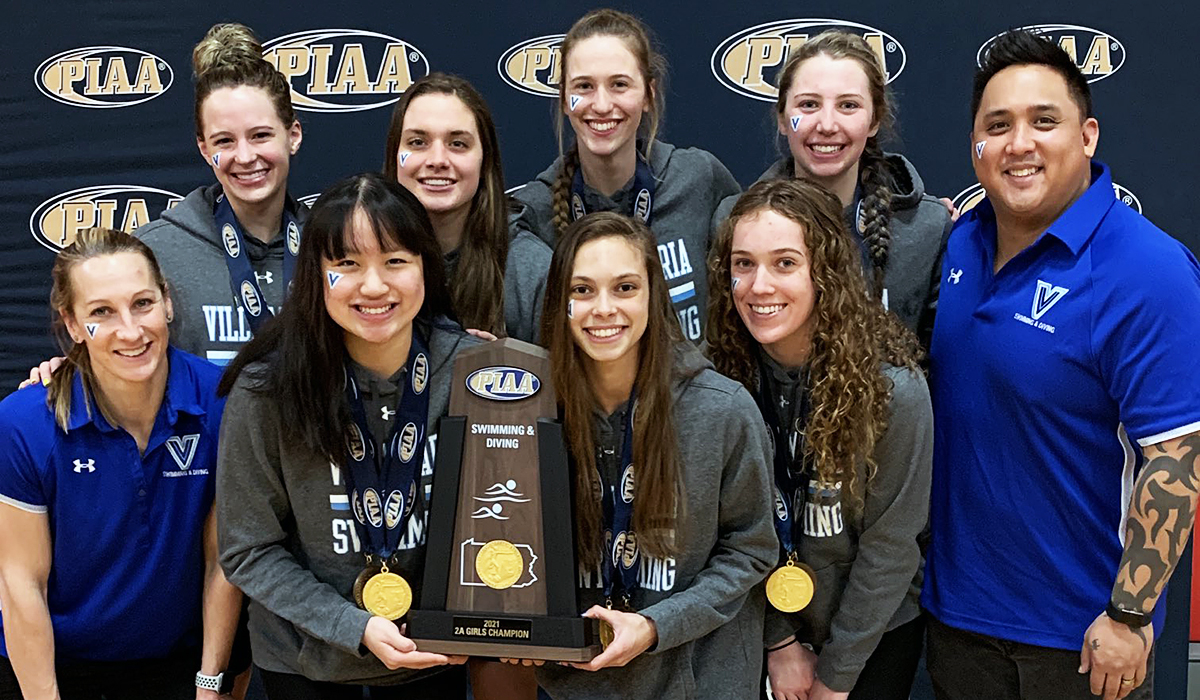 No. 10: Villa Maria Dominates the State in Fall, Winter Seasons

It’s hard to have a more impressive run than the Villa Maria Victors did this year.

Not just in one sport, but across the board.

The Victors dominated showing their prowess in the fall and winter seasons. Whether it was on the golf course, the tennis court, the basketball court, or in the pool, they excelled at it all.

One athlete, in particular, Tara Thomas, put together a fall season for the ages.

Thomas, a rare two-sport star in one season, won a PIAA silver medal in Class 2A tennis and also qualified for the PIAA championships in golf.

Just a day after competing at states for golf, Thomas yielded nothing to Hickory’s Daphne Borowicz in a 6-0, 6-0 victory.

Her run through the state tournament was equally impressive, as she yielded just three points in her quarterfinal (6-1, 6-0) and semifinal (6-2, 6-0) wins. Her run ended with PIAA silver, as she fell to Olivia Dorner of South Williamsport in the finals, 6-0, 6-1.

This came on the heels of her golf performance, which began with a third-place finish at the D10 championships just behind the Swan sisters from North East. She finished within three shots of the champion, Lydia Swan, and headed into states with a ton of confidence. She finished 16th in the state in Class 3A at York’s Heritage Hills. Quite a feat indeed.

The momentum carried over into the winter season for the Victors, which ended in state gold in the pool and silver on the basketball court.

It may look strange in the history books, but this was actually the second consecutive team title in Class 2A swimming for the Victors after the 2020 championships were wiped out due to COVID. This came on the heels of yet another District 10 title for Villa.

Villa was eager to make up for lost time at Bucknell, as the 200 Medley Relay team of Megan Maholic, Jasmine Chen, Olivia Mottillo, and Hayley Palmer edged Wyoming Seminary, 1:46.18-1:46.63, for first place.

That was the only event title for the Victors, as they battled back and forth with Wyoming all day. The drama lasted until the final event, as the Victors outlasted their rivals from the East, 157 points to 152.

While the swim team was winning gold, the basketball team was making its run through the state tournament in Class 4A as well.

The Victors absolutely dominated the regular season winning all but one game by double-digits and dominated Fort LeBoeuf for the D10 championship.  After another one-sided win over St. Marys, the sledding got a little tougher, beginning in the PIAA quarterfinals where they earned a dramatic 29-28 win over Beaver. It was only fitting that this dominant defensive outfit continued to get things done on that end of the floor in the state playoffs. Freshman Jayden McBride also knocked down a pair of clutch free throws to preserve the win.

A wire-to-wire win over Delone Catholic in the semifinals set up a trip to Hershey and a chance for a state championship for the Victors, who have established themselves as one of the top programs in Pennsylvania.

It wasn’t meant to be, however, as Archbishop Wood pulled away late for a 10-point win to take the gold.

Nevertheless, this was a special group, one that defined the word team. They didn’t have a single player average in double figures scoring. They had a number of different players who could fill it up on a given night, led by Rachel Majewski, Ava Waid, Carissa Dunham, Ainsley Thunell, Sydney Pearson, McBride, and Lena Walz.

The run put the cap on what was a special calendar year for Villa.