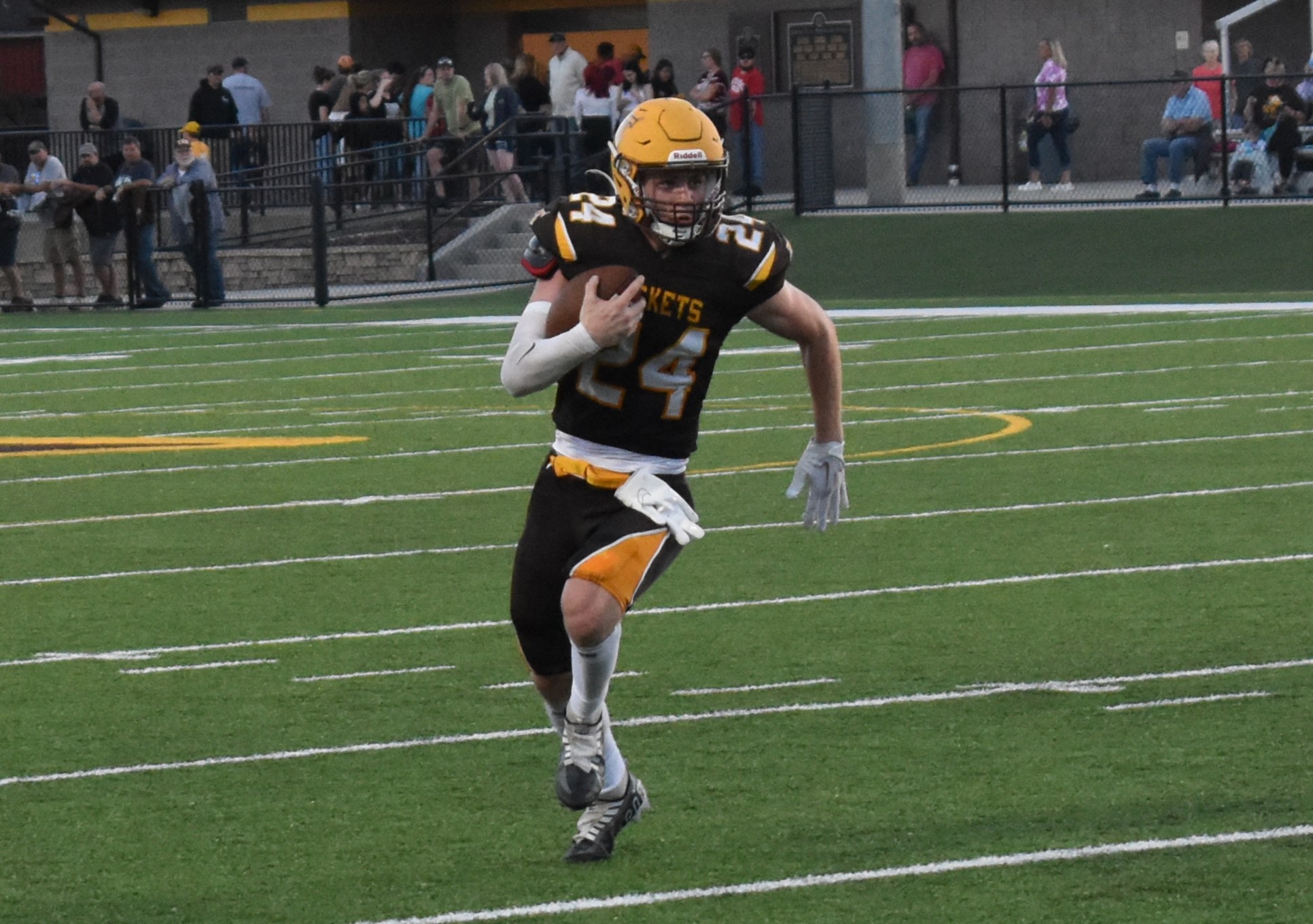 Franklin football coverage is brought to you by

TITUSVILLE, Pa. – It was only fitting that in a game dominated by defense that an interception helped seal a 14-13 Region 4 win for Titusville against Franklin.

With the Knights driving deep in Titusville territory, Titusville’s Nate Stearns came up with a tipped pass from Franklin quarterback Hunter Marsteller inside the Rockets’ 10-yard line with 25 seconds to go.

With Franklin out of timeouts, that essentially ended the game.

Nate Stearns with the INT. Titusville is going to hold on for a 14-13 win over Franklin pic.twitter.com/8Xx9BQcvBx

“That win you saw right there was a team playing together and a dedicated coaching staff,” said first-year Titusville head coach Mike Reynolds. “It’s exciting. Any time you teach kids about character and heart and play to the end, those can be empty phrases. But on a night like this when the pressure’s coming, these guys were able to overcome mistakes and just focus on the next play.”

Franklin coach Matt Turk was also ejected from the game as Titusville took a knee.

It was one of two chances Franklin had to take the lead inside the Titusville 25 in the fourth quarter. Facing a fourth-and-four from the Rockets’ 24 on the previous possession, Marsteller completed a pass to tight end Drew Wilkinson that appeared close enough for a measurement, but a penalty turned the ball over on downs back to Titusville.

The Rockets ran the clock down inside of two minutes, with Franklin getting the ball back at midfield with 1:15 to go.

Marsteller connected with Cole Buckley on a 36-yard pass down to the 16 and after Marstellar spiked the ball, Stearns’ interception came on the following play.

Franklin’s Cole Buckley (5) had a big game on both sides of the ball.

All the drama came after a scoreless first half.

Brock Covell connected with Kameron Mong on a 9-yard touchdown pass with 5:51 to go in the third quarter, breaking a scoreless tie and putting the Rockets up 7-0.

Less than a minute later, Franklin lineman Jonah Heckathorne made an incredibly heads-up play, scooping up a fumble by teammate Toby Sanchez at his own 43 and racing 57 yards for a touchdown.

“That’s the grit of our program,” Turk said. “We always teach our kids adversity doesn’t build character it reveals it. At the end of the day, we showed that. We never say die and you saw that night.”

After forcing a Titusville punt, Buckley made another big play for the Knights, getting 10 yards behind the Rocket defense. Marsteller put the ball on the money and Buckley walked in for the score to give Franklin its first lead of the game, 13-7.

Braden Johnson blocked the extra point, which proved to be critical.

“It was nice to see the special teams step up,” Reynolds said. “You maybe don’t think too much about it at the time, but those things come back.”

That turned out to be extremely short-lived, as the Rockets needed just three plays to take the lead back.

An Ashton Burleigh 37-yard pass to Johnson and a Covell 31-yard completion to Brett Schmidt set the ball up at the 12-yard line, where it was once again Covell finding Mong for the score.

“Those guys have a really nice chemistry between the two of them,” Reynolds said. “There are opportunities to get him open down the field and we’ll continue to work on that.”

Owen Reib’s extra point was good, and the one point proved to be the final margin of victory for the Rockets.

“We liked our position on defense,” Turk said. “We gave up a couple of big passes that we know we’re better than that.”

Covell finished 7-of-11 passing for 110 yards and the two touchdowns and also rushed for 55 yards.

For Franklin, Marsteller threw for 122 yards and ran for 68 more, while Buckley had 98 yards receiving and two interceptions, including one in the end zone on Titusville’s opening drive of the game.

SHARPSVILLE, Pa. – Sharpsville’s defense was stifling on Saturday in a 26-0 Region 3 win over Wilmington.

The Blue Devils limited the Greyhounds to just 112 yards of total offense in the win.

Caullin Summer rushed for 93 yards and two touchdowns and threw for 158 yards in the win for Sharpsville.

Liam Campbell got the scoring going for the Blue Devils with a 23-yard field goal late in the first quarter and Summers extended the lead with his 3-yard touchdown run in the second quarter.

The Blue Devils held a 10-0 lead at halftime and extended it to 16-0 after Braden Summers’ 3-yard scoring run at the 8:07 mark of the third quarter.

Caullin Summers put a capper on the scoring with a 6-yard run late in the third quarter. Braden Summers finished with 106 yards rushing and Garen Levis 69 yards receiving.

For Wilmington, Ben Miller rushed for 89 yards in defeat.

HERMITAGE, Pa. – Morgan Applebee had two rushing touchdowns and threw for another and Van Jones rushed for 134 yards and a score as Cambridge Springs beat Kennedy Catholic in Region 1 action, 35-18.

The Blue Devils built a 35-6 lead after three quarters en route to the win.

After a scoreless first quarter, Applebee and Jones both had rushing touchdowns in the second quarter, Applebee’s from a yard out and Jones’ a 9-yarder with five seconds left in the half to give the Blue Devils a 14-0 lead.

Applebee connected with Ethan Counasse on a 15-yard scoring strike to open the third quarter scoring and he also added his second rushing touchdown of the game later in the quarter. Kaiden Boozer became the fourth different Blue Devil to hit the end zone with his 2-yard plunge.

For Kennedy Catholic, Simeir Wade had a pair of second-half touchdown runs of 65 and 8 yards, while also throwing a touchdown pass to Jermaine Dunlap.

Brett Kania added 93 yards on the ground for Cambridge Springs, while Wade had 196 yards rushing and 99 passing for Kennedy Catholic.

Led by Cherry, Reynolds ECC Runs Past O-E; Juniata Spoils Janocko’s Quest for 300th Win
DuBois’ Hays Named Week One 2022 District 9 Jim Kelly POW Powered by the Allegheny Grille
This website or its third-party tools process personal data.In case of sale of your personal information, you may opt out by using the link Do not sell my personal information.
×
Manage consent