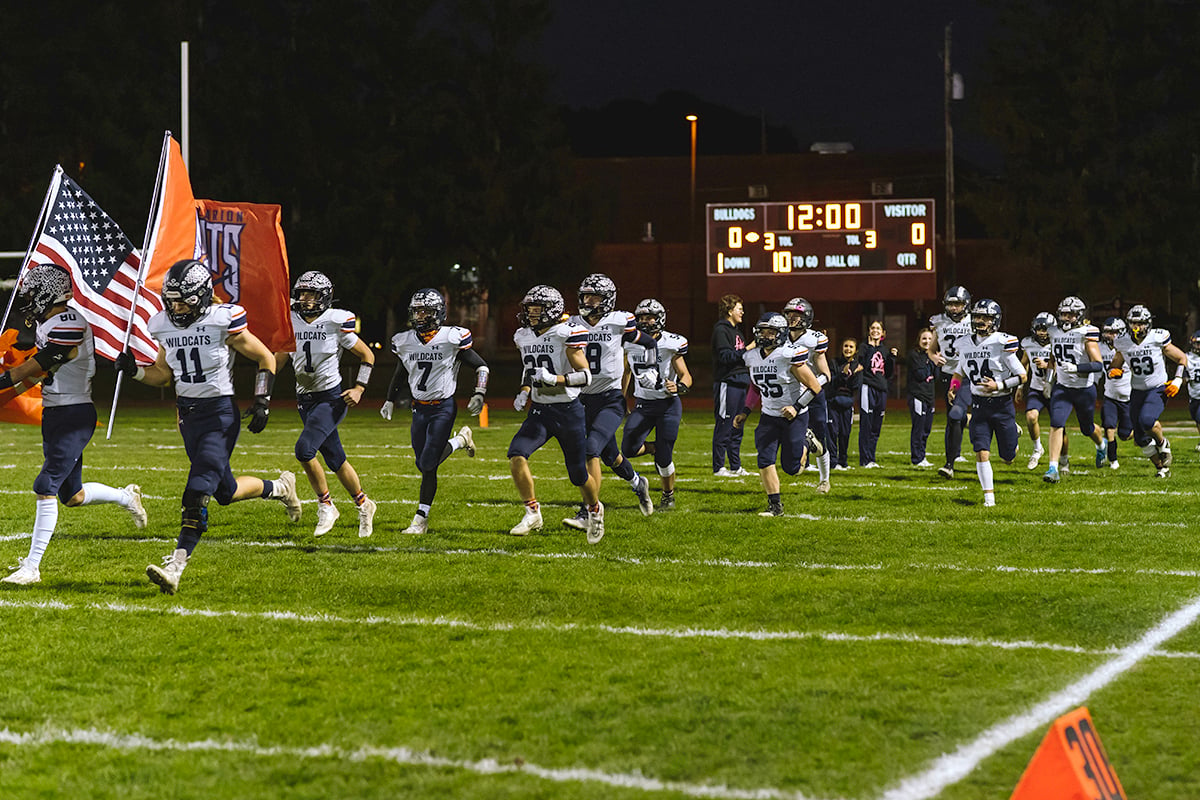 The Central Clarion Wildcats won the District 9 League's Region 1 title. They'll try to win their first district Class 2A championship in a rematch with Brookville.

CLARION, Pa. — By calendar numbers, it’ll be 78 days since the first time the Central Clarion Wildcats and Brookville Raiders met on the football field.

For at least the Raiders, 78 days probably feels like much longer than that. And it’s one day later than originally scheduled since District 9 Thursday afternoon moved the game from Friday to Saturday at Karns City High School starting at 7 p.m.

Friday’s game was orginally scheduled for Clarion University’s Memorial Stadium, but the forecast of rain and wind from the remnants of Hurricane Nicole presumably led to the move. Memorial Stadium was booked for Saturday with the Golden Eagles’ football game at noon and a high school soccer playoff game at 6 p.m.

Back in late August, the injury-riddled Raiders were routed by the Wildcats 42-7 in the season-opener and got off to an 0-3 and 1-4 start and had to rally in the fourth quarter to beat St. Marys in Week 6 to avoid a 1-5 start.

But the Raiders, who are on their third starting quarterback, regrouped and managed to get to 5-5 by the end of the regular season and then beat Karns City for a second time, 31-7, to earn a rematch with the Wildcats.

The Wildcats didn’t lose until a Week 10 shootout loss to Redbank Valley, so they’ll look to win their first-ever D9 Class 2A title as a co-operative program under the Wildcats name. The Raiders haven’t won a D9 crown since 2006.

The D9 champion moves on to next week’s game in the first round of the PIAA playoffs against the winner of this week’s District 8 (Pittsburgh City League) vs. District 5 game — Westinghouse vs. Berlin-Brothersvalley — that’s scheduled for Friday night at Somerset High School.

Central Clarion ran away with the Region 1 title this year, going 7-0 while the Raiders, St. Marys, DuBois, Karns City and Punxsutawney all finished 4-3.

The Wildcats sport some big offensive numbers as they average 410 yards per game. Jase Ferguson, who was shaken up some at the end of the loss to Redbank Valley two weeks ago but is healthy, has thrown for 2,451 yards (119-for-204) with 30 TDs against 15 interceptions. He’s also a significant running threat, with 448 yards and seven TDs.

Against the Raiders, Ferguson threw for 307 yards and four TDs, including two to Ashton Rex who caught three passes for 216 yards with a 91-yard TD connection.

In a season where both teams have forced tons of turnovers, that’s how the first game went as both teams turned the ball over six times with the Wildcats returning two interceptions for scores.

Five Wildcats have three or more interceptions with Ferguson’s five leading the way. Brady Quinn and Ryan Hummell each have four while Smith and Braylon Beckwith both have three. Hummell is the top tackler with 117 stops while Beckwith and Smith round out the top three with 84 and 81 respectively.

The Raiders lost returning 2,000-yard passer Charlie Krug to a season-ending injury in the first game with the Wildcats, then backup Easton Belfiore to an injury that knocked him out for the season a few weeks later before the Raiders turned to converted receiver Noah Peterson to take over quarterbacking duties.

The senior Peterson has thrown for 797 yards in seven starts, completing a whopping 77 percent of his passes (75-for-97) with nine TDs and four interceptions.

Senior Jackson Zimmerman, also knocked out with an injury in the opener, went over 1,000 rushing yards for the season in last week’s win over Karns City. His role in the team’s power running game is another huge factor in the team’s turnaround. Despite missing two games, Zimmerman went over 1,000 yards for the season (188-1,038, 15 TDs) and has been the workhorse at times, rushing for over 200 yards in back-to-back wins over St. Marys and Bradford.

Brayden Kunselman is the top receiver with 60 catches for 729 yards and nine TDs with Truman Sharp (20-259) also a target. Carson Weaver has rushed for 305 yards on 74 carries and two TDs.

Peterson and Kunselman lead the turnover-forcing defense with nine and seven interceptions respectively. Peterson has nine interceptions, picking off two last week with one going for a big 42-yard TD return at the end of the first half.

Jack Knapp leads the team with 87 tackles with Bryce Weaver (71) and Carson Weaver (69) at the top of the unit’s leaderboard.

D9 Class 1A semis: Rematches for Gators, Panthers, Bulldogs, Rovers
Class 3A, 2A and 1A Teams Gear up for D10 FB Semifinals; McDowell, Meadville Head Into Subregional Play
This website or its third-party tools process personal data.In case of sale of your personal information, you may opt out by using the link Do not sell my personal information.
×
Manage consent