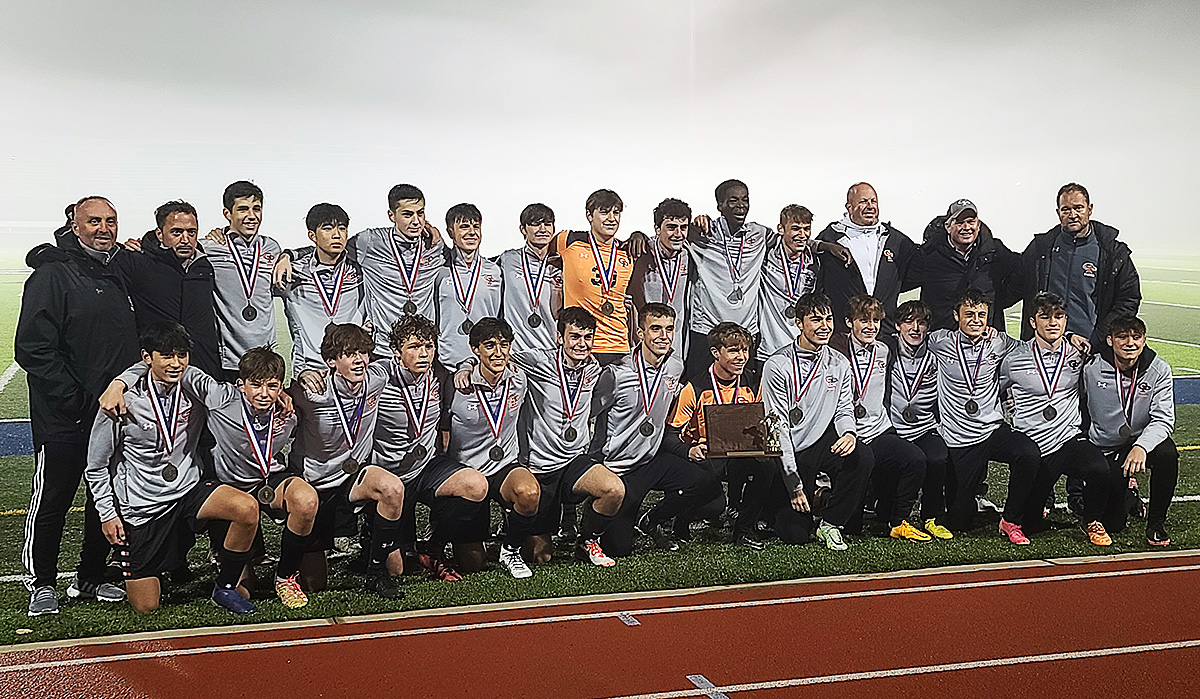 WATERFORD, Pa. – Players, officials, and fans couldn’t see across the field for most of the game, but Cathedral Prep had no problem finding the back of the net in a 10-0 win over Meadville in the District 10 Class 3A boys soccer championship.

The title was the ninth straight, and 34th overall, for the Ramblers who will face the No. 3 team out of the WPIAL (either Plum or Montour) in the first round of the PIAA tournament on Nov. 8.

The fog began rolling in just before the opening whistle and slowed the Ramblers’ offense for approximately 10 minutes. Once Dylan Danch scored the first goal, the floodgates opened.

Dylan Danch puts Cathedral Prep on the board just over 10 mins in. pic.twitter.com/cxtYRGD9CA

“Little bit of a slow start, but once we got going it took off,” Cathedral Prep’s Noah Handzel said.

Cathedral Prep scored four more goals in the next seven minutes, including a Handzel hat trick and Danch’s second goal, to take a 5-0 lead with 23:13 to play in the first half.

Goals by Brandon Lin and Max Johnson made it 7-0, and Pau Berea Solves scored with 13.3 seconds left in the half to give the Ramblers an 8-0 halftime lead.

By the time the second half began, the fog was so thick the opposite side bleachers were no longer visible.

The bleachers are over there somwhere…. pic.twitter.com/dt1vP5VXst

“Last year, same place, same D10 game, it was a little bit like this,” Handzel said. “(It was) pouring rain, a little bit of fog, but didn’t hold us back last year and didn’t stop us this year.”

A pair of second-half goals pushed the score to its final score of 10-0. The match was called with 3:24 to play after a warning to the Meadville bench about singling Ramblers’ players by name led to a verbal altercation between the two benches.

ERIE, Pa. – Behind a three-goal effort from Liam Pikiewicz, top-seed Seneca rolled past Wilmington 5-1 to capture the Class 1A boys’ soccer title.

The Bobcats got the scoring going early via a Jed Brown goal and led 2-0 less than midway through the first half on Pikiewicz’s first goal.

With the score 2-0, Wilmington’s Ryder Tervo scored shortly after to make it 2-1, but the momentum was short-lived, as Lee Hoover made it 3-1 i the late stages of the first half.

Pikiewicz scored two goals just under two minutes apart in the second half for the Bobcats to put the finishing touches on the Bobcats’ victory.

With the win, Seneca advanced to play the third-place finisher out of the WPIAL in the first round of the PIAA playoffs on Tuesday (Nov. 8).

WATERFORD, Pa. – Robert Umpleby scored a pair of goals to help McDowell to a 3-0 win over Brashear in their PIAA Class 4A subregional game on Tuesday.

Umpleby scored once in each half, with Luis Corrales scoring in the second half to make it 2-0 (the Trojans led 1-0 at halftime).

The Trojans must face another subregional gauntlet on Saturday against the District 6 champion (either State College or Altoona, to be played on Wednesday), with the winner advancing to the first round of the PIAA playoffs.

It was a big game for Schnars, who also had assists on both Pierce and Taylor’s goals.

Brigid Ochalek had the clean sheet in net.

With the win, Mercyhurst Prep advances to the first round of the PIAA playoffs, where they will play the No. 2 team from the WPIAL on Tuesday (Nov. 8).

Pizza Hut Scoreboard: Nov. 1, 2022 Volleyball/Soccer
Bradford Sweeps 3A Girls, Boys Soccer Titles
This website or its third-party tools process personal data.In case of sale of your personal information, you may opt out by using the link Do not sell my personal information.
×
Manage consent