Three-Peat: Conneaut Outlasts Villa to Claim Another District 10 Volleyball Crown in 3A 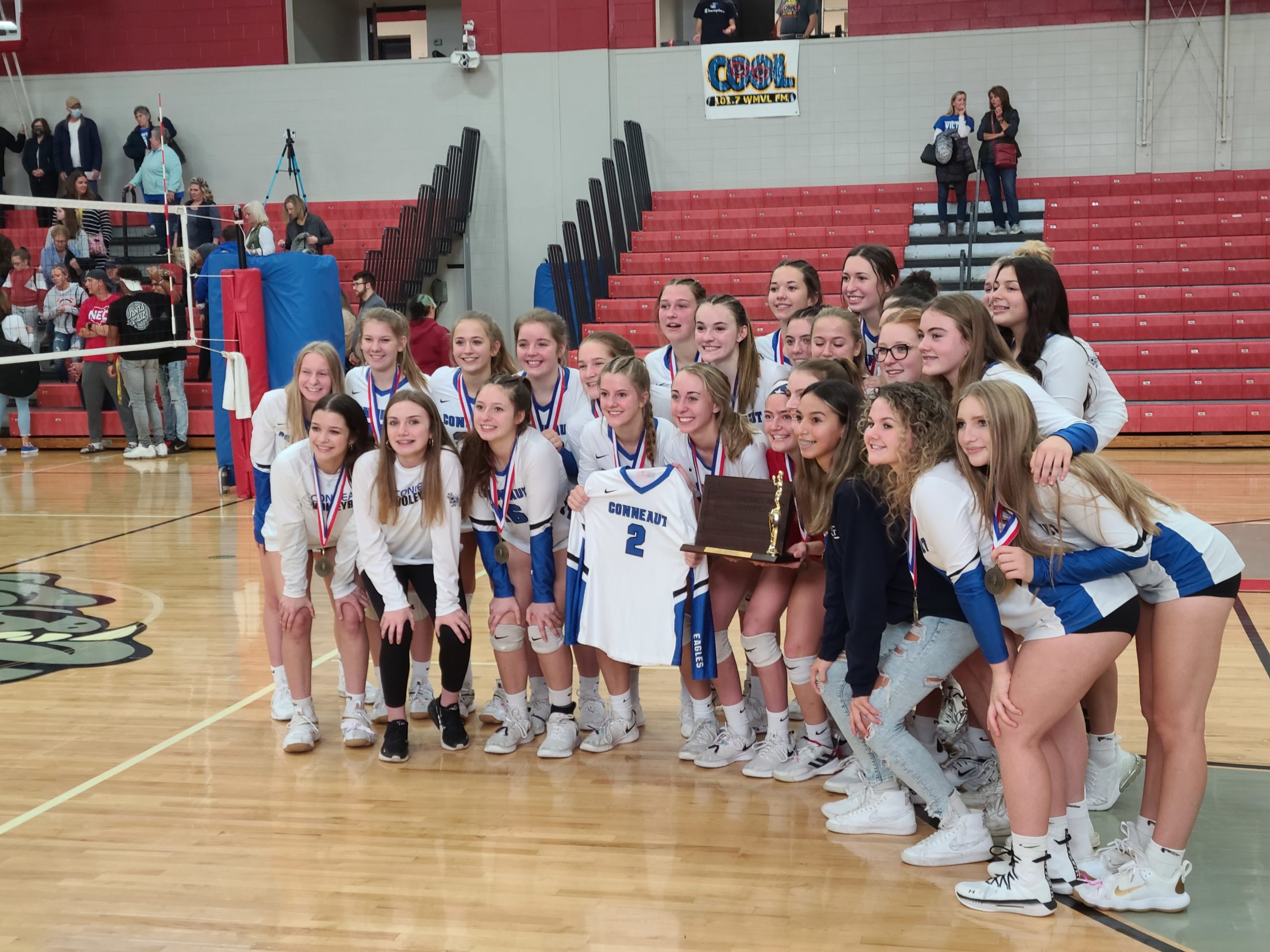 “I tried very hard on the sidelines to keep a straight face and not let my emotions go up and down,” said Conneaut coach Christine Krankota about the third set win. “All the credit girls to the girls. Whenever someone needed to step up and make a play, they made a play.”

Villa was on the brink of taking a 2-1 lead, up 24-21, but Conneaut rattled off four points in a row to take a 25-24 advantage. From there, the teams traded points until, leading 30-29, the Eagles were able to get a block at the net to take the set.

Sylvia Prebor and Kaylee Mattera both had big kills during those final moments of the third, as did Villa’s Karley Berchtold.

Conneaut came out with all the momentum in the fourth set, taking a 5-point lead on several occasions, including at 18-13 after a kill from Mackenzie Wensel.

Villa didn’t go down without a fight, however, as they rallied to tie the set at 22-all after a kill from Berchtold, but Conneaut rattled off the next three points to win the set and the championship.

“Our defense has really taken off over the past couple of weeks, but Villa has too powerful of an offense to completely shut them down,” Krankota said. “So we had to tell the girls the mindset coming in was that they were going to get their’s and move on to the next point. Congratulations to Villa, that’s a very good team, they left it all out on the floor. They had a fantastic season.”

That defense Krankota alluded to was spearheaded by Rylee Jones, who had a team-high 16 digs.

Offensively, the Eagles got it early, thanks in large part to Mattera and setter Amber Clark. Mattera also had a pair of early aces and Prebor a key kill as the Eagles went on a big run in the first. Leading 9-6, they went on an 11-3 run to take command.

“We all came together as a family at the same time,” Clark said about this season for the Eagles. “We really wanted it. We had ups and downs all season and we just had to work through them.”

Villa answered back in the second set, jumping out to a 7-2 and never trailing. Berchtold had a kill and Willa Regal an ace during the early surge.

Conneaut rallied to tie it at 9-9 after kills by Wensel and Mattera, but Villa responded with a 9-3 run that included kills from Karlee Kieklak and Kasey Smith.

A kill from Berchtold and another ace from Regal helped close out the set, setting the stage for the pivotal third.

“Our offense put the ball away when we needed to,” Krankota said. “We figured out a way to win, and that’s what we found out about this group this year. They fight. They really worked on their mental toughness as the season progressed and that came into play tonight.”

Included in that offensive effort was Mattera, who had 28 kills to go along with six digs.

Here her talk about the win afterward:

After winning districts last season, Conneaut was forced to forfeit its first-round state playoff match because of COVID-19. This season, they will meet the third-place finisher from the WPIAL, Armstrong in the first round of the PIAA playoffs on Tuesday.

“I think they learned some things about themselves this season,” Krankota said. “Their relentlessness, their fearlessness, but those are things as a coaching staff we’ve known all along. We’ve been talking to them since the summer about how much potential they have and how much we believe in them. We had some bumps in the road this season. But they picked themselves back up. They just have so much fight and refuse to be denied.”

Cochranton Pushes Past West Middlesex for D10 Class 1A Volleyball Championship
Corry’s Brady, Warren’s Mineweaser Named AVCA All-Region
We use cookies on our website to give you the most relevant experience by remembering your preferences and repeat visits. By clicking “Accept All”, you consent to the use of ALL the cookies. However, you may visit "Cookie Settings" to provide a controlled consent.
Cookie SettingsAccept All
Manage consent