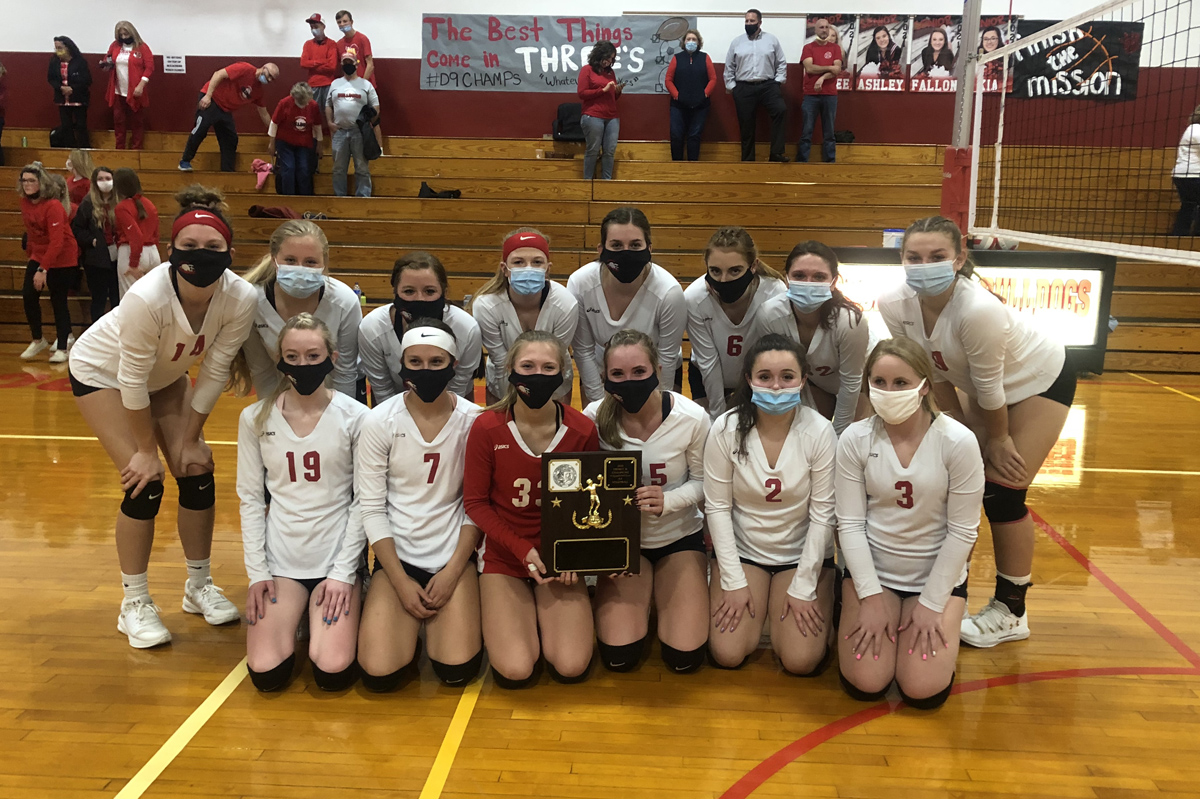 NEW BETHLEHEM, Pa. — Considering how the wave of District 9 titles have swept through Redbank Valley lately, as in the past week, perhaps the Redbank Valley Lady Bulldogs didn’t have a choice Thursday night but to add to the total.

Last Saturday and Wednesday, Redbank Valley won a football and girls’ soccer title on the same field in Brockway. Thursday at home, the volleyballers made it three titles in six days. It’s the fourth D9 title in program history — 2009, 2016, 2018 and this year.

“It feels great,” senior setter Brooke Holben said. “Especially since the football players won (last Saturday) and so did the soccer team, so it feels really good.”

The 20-1 Lady Bulldogs open the state playoffs also at home on Tuesday against District 5 champion Chestnut Ridge at a time to be announced.

“I coached for two years, I took four years off and I’ve been back, so this is six out of seven years we’ve been in the finals and we’ve won for them,” Lady Bulldogs head coach Matt Darr said. “That’s not a tribute to anything I’ve done, it’s a complete tribute to the players, and they know what needs done. They just continued to do it year after year and they hold the underclassmen accountable, and those girls hold the junior high accountable.”

And the emotional run for Keystone ended as the No. 5 seed ran into a balanced Redbank Valley attack.

Brynn and Caylen Rearick finished with 11 and eight kills apiece while Brooke Holben had 28 set assists.

“We wanted to keep the ball out of the middle and get the ball to the pins and to our outside, but also to Brooke Smith,” Darr said. “We don’t usually set our right-side that much, but she had a couple kills. We’re usually not getting a lot of contribution from that side because we’re so outside and middle heavy. So that was the plan, to keep the ball out at the pins and the middle and use all the offense tonight.”

“We wanted to get our kills in and be smart when we did it,” Minich said. “We knew they put up a big block and we needed to figure out a way to get around it and I think we did a very good job of doing that.”

Trying to win their first title since 1992, the Lady Panthers managed to play for a championships in a season that saw them lose one of their key players, setter Alexandria Johnston, to a serious on-court injury during their regular-season matchup with Redbank Valley.

Also, Head coach Bryan Mong’s father died this fall as did a parent of one of the team’s players.

Against Curwensville at home Monday, the Lady Bulldogs lost the first set and then swept the last three for a four-set win. This time, they started strong, but still needed a 7-0 run to finish off the 25-20 opening-set win.

The Lady Bulldogs led from start to finish in the second set, getting two kills from Huffman and a block and kill from Ryley Pago for four of the final five points for the 25-13 win.

Keystone avoided getting swept by leading the entire third set. Redbank Valley got it back to within 19-18, but the Lady Panthers ended the set on a 6-1 run with a couple of Leah Exley kills and the set point on a kill by Sydney Bell.

But any momentum by the Lady Panthers was set aside by Redbank Valley which started the fourth set on a 7-0 run as Caylen Rearick served three aces and Huffman and Hetrick added kills during the stretch.