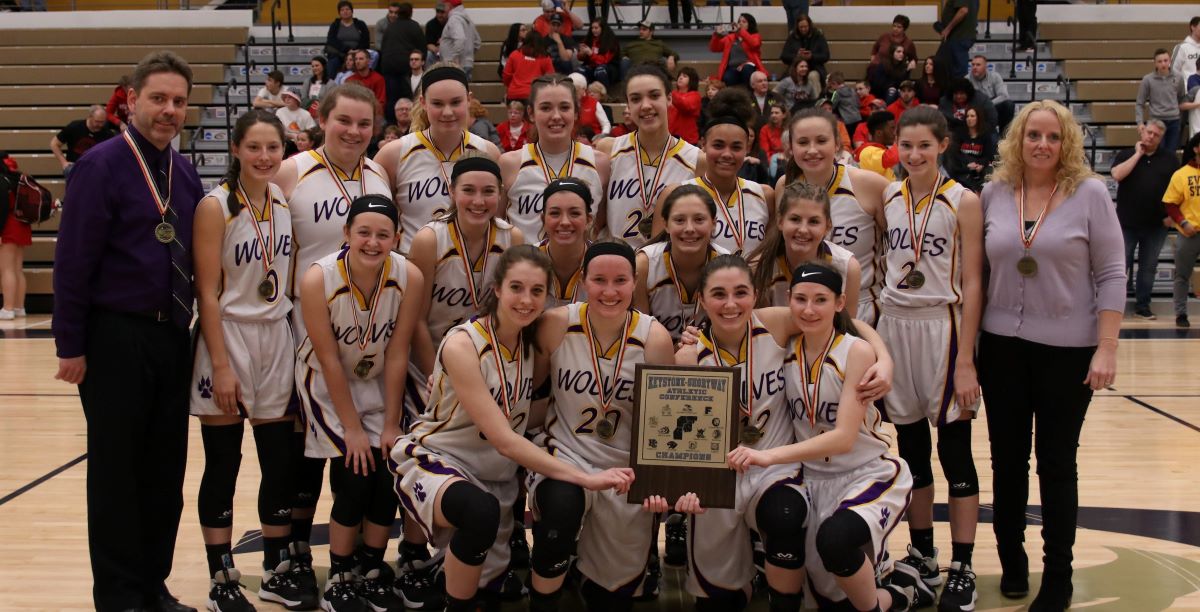 The North Clarion girls are hoping to get a chance to defend their KSAC basketball title, but the start of their season will be delayed. Photo by Jared Bakaysa of JB Graphics. See more of Bakaysa's work here

WEST SUNBURY, Pa. – The KSAC, the biggest basketball league in District 9 with 12-member teams in both boys’ and girls’ basketball, adjusted its season and criteria used for determining division champions Thursday, Nov. 19.

The adjustments were made at a meeting of the league’s principals and athletic directors.

“Per the PIAA, the league does not have the authority to postpone the season for our member schools,” a statement from the league said.
“In an attempt to accommodate the membership that has postponed their season the following was approved by unanimous vote.”

•The first play date of the league-approved schedule will be Jan. or Jan. 6 depending on the gender.

•Member schools will be permitted to play in the month of December so long as they meet all other PIAA requirements (minimum practice days etc). KSAC has no restrictions on a start date.

•With the change in the league schedule, member schools will now play each opponent in their division once, as well as the opponents in the crossover division once. This is different from previous seasons where teams played their division opponents twice. Member schools may play each other as many times as they shall desire. The contest that will count towards the league record and thus be counted as the game for consideration of the division champion, will be the first game played between the two opponents.

•As of Nov. 19, the intention and hope of the league is to still hold a league championship at the conclusion of the season. The same process as always will be used to determine the participants of the game.

1. Division Record
2. Head to Head
3. League Record
4. Record-v-next team in standing within the division (3rd Team, 4th Team, etc.)
5. Record-v-next common opponent in standing within the other division (3rd Team, 4th Team, etc.)
6. Number of wins versing teams with winning % at or over .500.
7. Overall winning percent of all played opponents.

D9and10Sports.com has learned that only four of the league’s 12 teams plan on starting practice Friday, Nov. 20, the first day allowed by the PIAA. Those schools, as of Nov. 19, included Clarion, Karns City, Moniteau, and Union. Clarion, Moniteau, and Union are all still doing in-person school while Karns City is on remote learning but is allowing winter practices to begin.

The schools not planning on starting winter sports Friday, Nov. 20, include Venango Catholic – the only school on this list not in remote learning right now – North Clarion, A-C Valley, Redbank Valley, Forest Area, Clarion-Limestone, Cranberry, and Keystone. It is not yet known when those schools plan on starting the winter season, although it is known that North Clarion will hold a school board meeting Tuesday, Nov. 24, to discuss winter sports, among other things.

2021 Burger King Classic Cancelled
Grove City Boys Soccer Questioned By District 10; No Girls Basketball at Tidioute Charter This Season
We use cookies on our website to give you the most relevant experience by remembering your preferences and repeat visits. By clicking “Accept All”, you consent to the use of ALL the cookies. However, you may visit "Cookie Settings" to provide a controlled consent.
Cookie SettingsAccept All
Manage consent