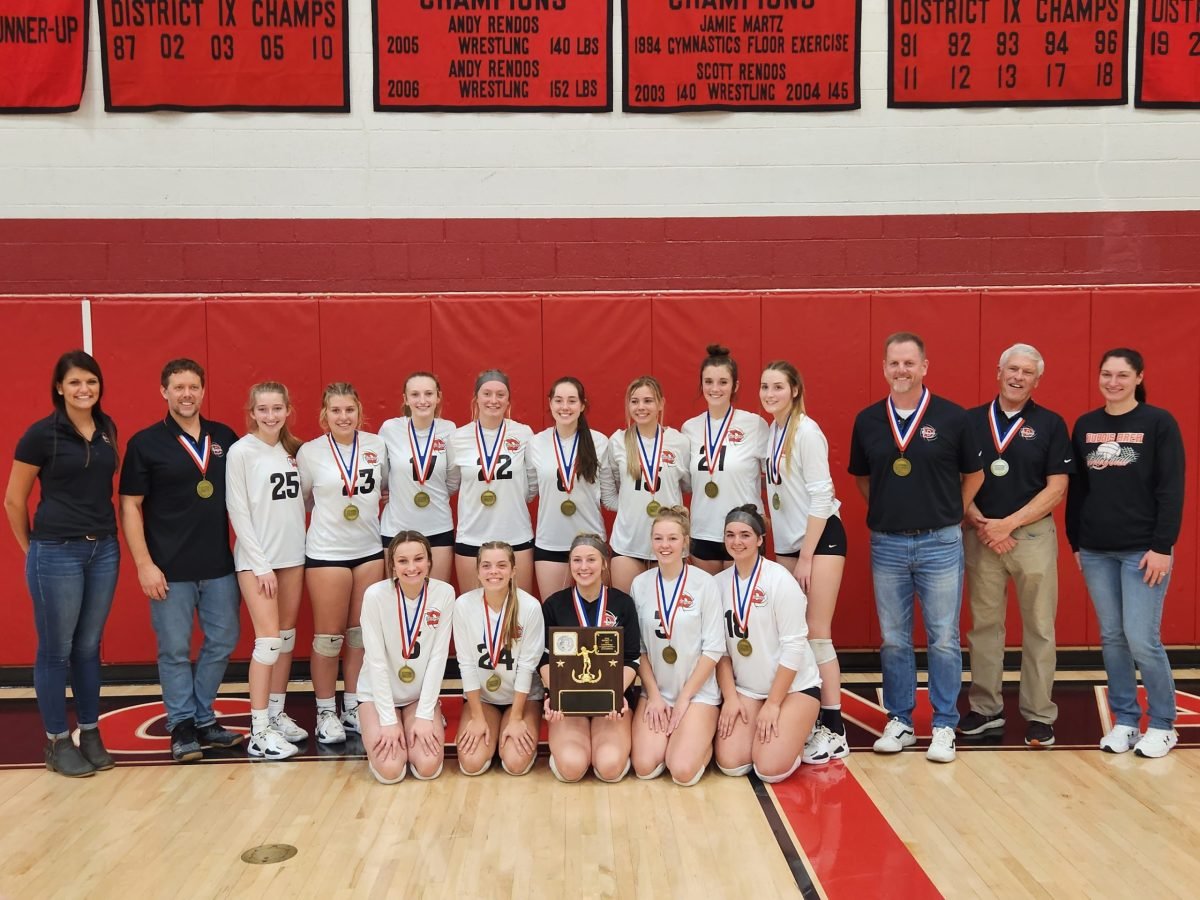 BROCKWAY, Pa. – The DuBois volleyball team is now going to need a second hand to count the number of District 9 titles they have won in a row.

“Every practice we just work as hard as we can and it pays off,” said senior setter Emily Snyder, who had 30 set assists.

“We’re always in the gym working hard,” said junior Morgan Pasternak, who finished with five kills. “It’s not easy to do this but I’m proud of us and proud that we keep doing it.”

See the full interview with Snyder and Pasternak:

“When we put the ball in play we didn’t miss and had them on their heels a little bit,” said DuBois coach Jason Gustafson. “We got a lot of free ball situations where you can run your offense, and that’s kind of the tell-tale sign you’re doing a good job at the service line. You’re able to break them down and are able to get into your offense.”

DuBois’ Jess Pfaff goes up for a kill during Monday’s D9 Class 3A title match against DuBois.

St. Marys was as close as 12-8 in the first set, but DuBois went on a 6-0 run to take command, with Kendra Cowan, who had six kills, notching two of them in the surge.

Emma Delp (who had five kills) and Pfaff both had kills to close out the first.

“If you jump on a team, it can be hard to keep your focus and keep your level of play up and your energy,” Gustafson said. “That’s always a challenge for us, but they definitely did a good job of that tonight.”

It was much of the same in the second, with St. Marys hanging in early, down 6-4, but DuBois went on a 17-5 run, with Pasternak and Pfaff notching multiple kills.

DuBois wins the second set 25-11 to take a 2-0 lead pic.twitter.com/BHIDQewALl

It was a 10-3 run in the third set to break things open, as Maddy Crabtree had two of her five kills as well as an ace in the set.

DuBois captures its sixth D9 title in a row, 3-0 over St. Marys, winning 25-12 in the third pic.twitter.com/PL1yctIZle

“These kids, these seniors have seen a lot of volleyball and played a lot of volleyball,” Gustafson said. “They have really thick skin. But there’s pressure in this game (D9 final) regardless. This group of girls, some of them have contributed for three years, some for four years. As a coach, you hang your hat on the kids that are out there playing for you and how hard they work.”

For St. Marys, Lindsey Reiter and Rylee Nicklas had three kills each, while Bella Field had two blocks.

DuBois will now host District 8 champion Obama Academy in a subregional on Wednesday at 6:30 p.m., with the winner advancing to play the No. 3 seed from the WPIAL in the first round of the PIAA playoffs on Tuesday, Nov. 8.

“If you can’t look forward to potentially two home games in the state playoffs, there’s something wrong,” Gustafson said. “We have a really good set-up going in. I know the kids will be amped up for that for sure.”

Clearfield Lights up the Scoreboard, Beats St. Marys For D9 Class 2A Girls Soccer Title
Nov. 1, 2022 Volleyball and Soccer Schedule
This website or its third-party tools process personal data.In case of sale of your personal information, you may opt out by using the link Do not sell my personal information.
×
Manage consent