Swaim, Bedford Too Much For Hickory in Class 3A Quarterfinals 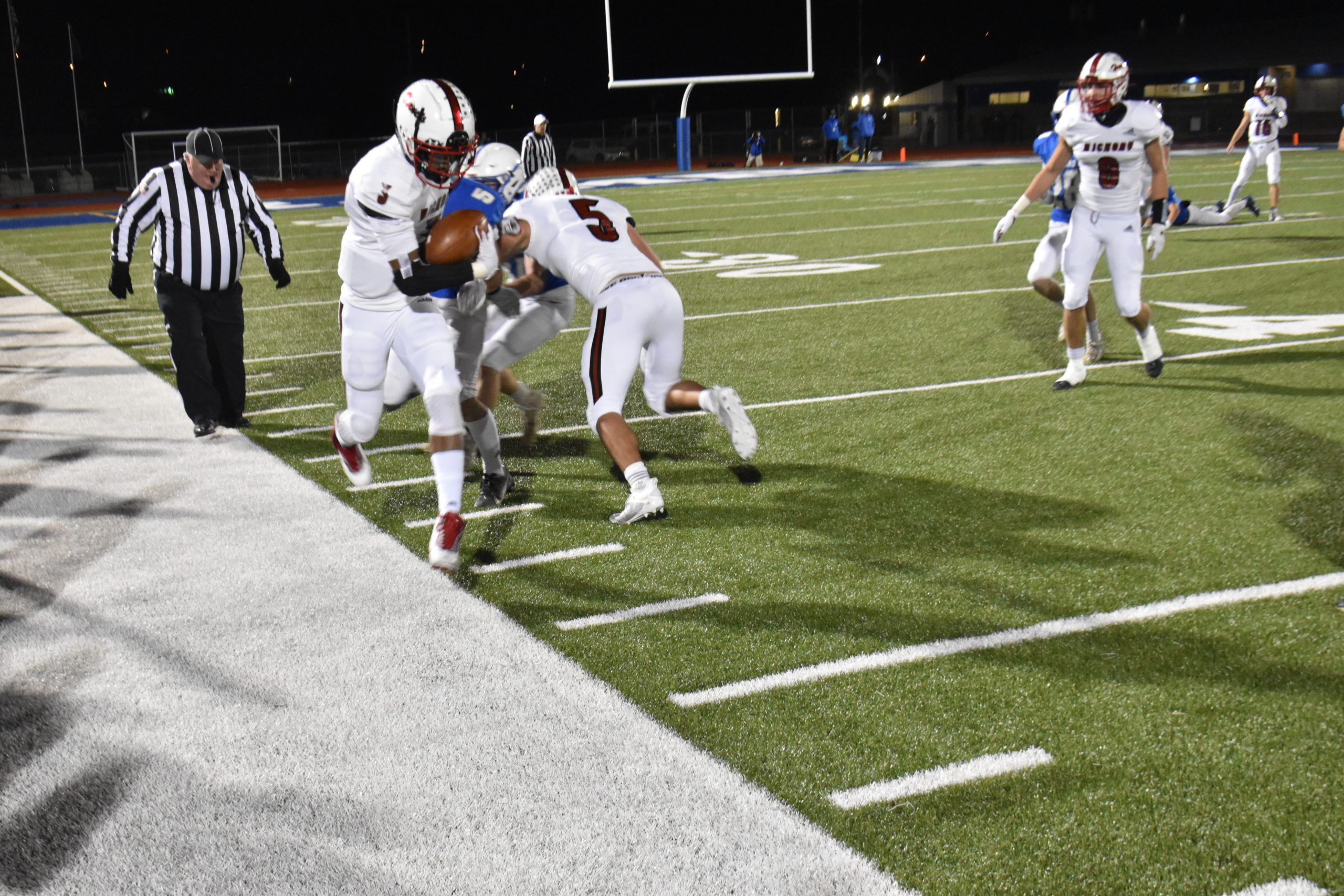 Hickory's Ramarion Whitehead tiptoes out of bounds after picking up a first down.

It was hard to argue with him after Swaim rushed for 253 yards and a pair of touchdowns to lead Bedford to a 34-17 win over Hickory in the PIAA Class 3A quarterfinals on Friday at Windber High School.

“I’m watching film and I thought of Tim Tebow,” Dungee said. “That was the first thing I thought of and it came to fruition. He’s powerful, strong, he’s a heck of a football player. To only be a junior…he’s a really special kid.”

Bedford (10-0) methodically moved the ball up and down the field all night, occasionally netting a big chunk play courtesy of Swaim.

His 56-yard touchdown run with 1:51 to go in the third quarter that made it 27-10 was a back-breaker for the Hornets.

“We wanted to establish a lead so they couldn’t line up and do that,” Dungee said. “When you don’t establish that lead he just wears on you.”

Elijah Cook was the thunder to Swaim’s lightning, rushing for 78 yards and three scores.

Hickory did lead briefly in the game, after senior quarterback Michael Henwood found an open Matt Cannone down the seam for a 46-yard touchdown on the first play of the second quarter that, coupled with Lukas Jones’ extra point, made it 7-6.

It was one of several momentum-shifting plays in the second quarter.

Ramarion Whitehead intercepted Swaim on the first play of the ensuing drive, and it appeared as if Hickory was assuming control with the ball at the Bedford 25.

Hickory’s Michael Henwood finds some running room in the first half.

Bedford stole in right back, however, as Connor Clarke picked off Henwood, which led to the drive of the game.

“We hit the big play, we get the interception and then we give it right back, it was just little things like that,” Dungee said.

Hickory responded with a Lukas Jones 28-yard field goal on a drive that featured a 40-yard connection from Henwood to Cannone with 3:20 to go in the half.

Bedford drove right back down the field, but the Hornets defense stood tall, stopping a fourth-and-goal at the eight.

Instead of running out the clock with just 12 seconds left in the half, the Hornets tried a hook-and-ladder, Henwood to Whitehead to Clay Wiesen. Wiesen raced down the sideline and looked as if he may score, but was bumped out of bounds in Bedford territory to end the half.

“When you play a good team like that, we just made too many mistakes,” Dungee said. “We had balls go through our hands, just small stuff. The hook-and-ladder, by inches, Michael Henwood down the sideline by inches. Sometimes it just happens. Football, the old saying is it’s a game of inches and tonight the inches didn’t go our way.”

Bedford’s ground game came out and took control in the third quarter, driving 74 yards on their opening series, capped by a 12-yard touchdown run by Cook.

The usually vaunted Hickory rushing attack struggled to get things going, and Swaim’s long touchdown run to make it a three-score proved to be too much to overcome.

Wiesen scored on a 2-yard touchdown run early in the fourth quarter to cut the lead back to 10, but Bedford responded by chewing up clock and yardage, as runs of 18 and 13 yards by Swaim helped set up Cook’s third score of the night to put it away.

“Until they scored the touchdown to go up three scores with a couple minutes left, I never thought it was over,” Dungee said. “All those plays we made all year we just missed out on them tonight.”

Henwood finished with 268 yards passing, 146 of which went to Cannone.

Bedford now moves on to face Central Valley, a 35-0 winner over Elizabeth Forward in the WPIAL title game.

For Hickory, it was a bittersweet end to a truly special season.

“I was just telling these seniors I can’t imagine going to any practice or weight room without them,” Dungee said. “These guys beat us there. Hearts of lions, that senior group. Just so proud of them, beyond proud of them and what they’ve accomplished. Two years ago sitting at 2-7, if somebody had told me we’d be two-time region champions and district champions just two years into it, I probably wouldn’t have believed it. It’s because of those guys. I’m just so proud of them.”

District 9 and District 10 Football Live Scoreboard – Week 10 2020
A Night for the Ages: Behind Susen, Miller, Wilmington Runs for 628 Yards in Win Over Chestnut Ridge