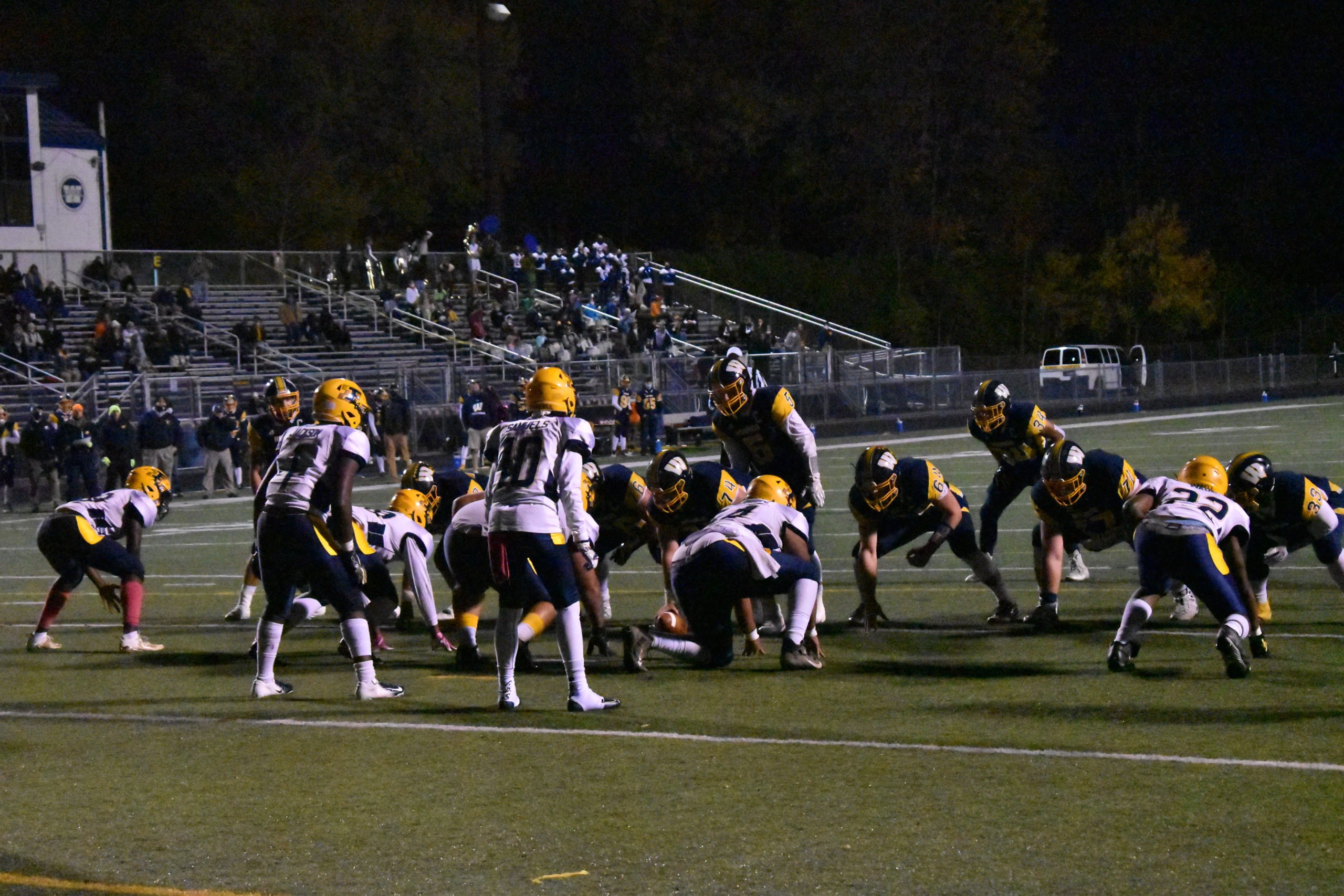 BEAVER FALLS, Pa. – Behind over a combined 200 rushing yards from Ethan Susen and Darren Miller, the Wilmington Greyhounds advanced the PIAA Class 2A finals with a 20-18 victory over WPIAL champion Beaver Falls on Friday night at Geneva College.

“For a lot of these boys, it’s an experience of a lifetime to get to go to Hershey,” said Wilmington head coach Brandon Phillian following the win. “To be able to compete for a state championship, it’s just surreal right now and beyond what words can describe.”

Fittingly for Wilmington, the game ended with the Greyhounds running out the clock with the strong ground game that has brought them to the verge of a state title.

Trailing 20-12, Beaver Falls used a 53-yard drive midway through the fourth quarter to cut the lead to 20-18 on a Jaren Brinker to Tyler Cain touchdown pass on a fourth-and-6 play from the 15-yard line with 4:25 to play.

But following the score, the officials called an unsportsmanlike penalty on Cain for spiking the ball in the end zone following the touchdown.

That meant the Tigers had to try the crucial 2-point conversion from the 18-yard line instead of the 3-yard line.

Brickner connected with Quadir Thomas on the 2-point attempt and he broke one tackle but was up-ended at the one-yard line keeping the game at 20-18.

Beaver Falls decided to kick the ball deep with just over four minutes to play and two timeouts remaining, but Wilmington never allowed the Tigers to get the ball back.

It started with a good kickoff return by Mason Reed, his second strong return of the game, that gave the Greyhounds the ball at midfield.

After a nine-yard rush from Ethan Susen, Darren Miller followed it up with a 10-yard scamper forcing Beaver Falls to burn its second timeout.

Following a pair of runs, Susen ran around the left side for 11 yards and could have scored but purposely fell at the 5-yard line to keep the clock rolling with just under two minutes to play knowing Beaver Falls was out of timeouts. Wilmington then kneeled out the win.

“It’s been well-documented about how we feel with the big boys up front,” said Phillian of the final drive of the game to run out the clock. “I’ve got to be honest with you, that play by Ethan Susen to down himself instead of scoring a wide-open touchdown was one of the most selfless and unselfish acts I have ever seen in my life. It was perfect execution by our boys in the four-minute offense.”

Wilmington never trailed in the game after taking a 7-0 lead less than three minutes into the contest.

The Greyhounds rushing attack, which rushed for nearly 650 yards last week, wasted no time getting things started on Friday night. Following a defensive stop on fourth and one in Beaver Falls territory, Miller followed up a 9-yard run with a 27-yard scamper to the end zone, breaking three tackles, to put Wilmington up 7-0.

On the ensuing possession, Beaver Falls got rolling on offense and quickly moved the ball into Greyhounds territory.

Early in the second quarter following a defensive stop, Wilmington capped off a 5-play, 51-yard drive, when Miller found the end zone once again, this time from 13-yards, to take a 13-6 advantage.

Later in the quarter, Beaver Falls drove the ball inside the Greyhounds 35 looking to even the score at halftime, but the defense held as a penalty pushed the Tigers back and Jake Chimiak knocked down a pass at the line forcing a Beaver Falls punt.

In the second half, Wilmington opened with the ball and quickly moved the ball inside Beaver Falls’ 30-yard line. Following a penalty, the Tigers came up with a big sack on third down forcing a punt.

Following back-to-back runs pushing Beaver Falls out past the 20-yard line, Syracuse commit Josh Hough took a pitch 76 yards to the house to cut the lead to 13-12 with 5:19 to go in the third quarter.

As it did in the second quarter, Wilmington wasted no time trying to answer.

After a 28-yard kickoff return from Reed, the Greyhounds were set up with great field position at the 45.

Wilmington quickly churned the clock in the third quarter and pushed the ball to the 15-yard line.

On third-and-11, it appeared quarterback Caelan Bender was about to get sacked when he shook a defender and flicked the ball to Susen on the near flat wide open as he had blockers ahead as he scampered 28-yards to the 3-yard line setting up first-and-goal. Two plays later, Bender took a sneak up the middle one yard on the first play of the fourth quarter for the score to push the lead back up to eight, 20-12.

“Obviously Ethan was open, but what I think was more spectacular was the play that Caelan Bender made,” said Phillian following the third-down conversion to keep the drive going. “I saw the defensive lineman come in and grab his jersey and thought oh man, I thought we were getting sacked. Somehow Caelan, like a magician, was able to underhand the ball to Susen and like you said, I think that could have been the play of the ball game.”

Beaver Falls didn’t go away without a fight.

After back-to-back defensive stops, the Tigers took over at the 47 with a good chance to cut into the lead. Following a 24-yard completion from Jaren Brickner to Tyler Cain, Beaver Falls was in business inside the 30-yard line.

But after a pair of runs from Hough, Beaver Falls was stuffed on three plays in a row forcing the fourth-and-six from the 15 with under five minutes to play. Following a Tigers timeout, Brickner connected with Cain on the drive once more to close the game to two points before the failed 2-point conversion.

Susen capped off a strong second-half performance as the senior running back carried the ball 15 times for 92 yards. Miller led the Greyhounds in rushing with 115 yards on 13 carries and two scores while Bender added 45 yards himself on 16 runs. Overall, Wilmington finished with 320 yards, including 249 on the ground.

“I could not be any more excited right now,” said Susen after the game. “Being a senior this year and getting the opportunity to go down to Hershey after all the struggles we have had this year with COVID, it’s just a great feeling.”

Leading the way for the Beaver Falls rushing attack was Hough, who had 130 yards in the loss on 12 carries. Through the air, Brickner finished just 5-for-16 for 96 yards, one touchdown, and one interception. The Tigers, who came into the game averaging over 350 yards on the ground, were held to just 170.

“They are a very talented football team,” said Phillian after the game of Beaver Falls. “With Josh Hough getting a full ride to Syracuse, you know, those things just don’t happen to anybody. You’ve got to be a pretty special player to earn a full ride to Syracuse. Beaver Falls was an outstanding opponent and we got a tremendous amount of respect for their team and their program.”

Wilmington will await the winner of the other PIAA Class AA semifinal game between Southern Columbia and Bishop McDevitt. The Greyhounds faced off against Southern Columbia in both 2017 and 2018 in the state playoffs.

“I trust our coaches to put in a good game plan,” said Susen looking ahead to next week’s championship game. “It doesn’t matter what team we play, I have faith in our coaching staff that they’ll get a game plan ready for us and we’ll work as hard as we can this week to get ready for this game.”

The PIAA Class 2A championship game will kick off at 11 a.m. Saturday, Nov. 28, from Hershey Park Stadium.

Third Quarter Dooms Reynolds In Class 1A Semifinal Loss to Jeannette
McDowell Falls to Pribula, Central York in Class 6A Semifinals
This website or its third-party tools process personal data.In case of sale of your personal information, you may opt out by using the link Do not sell my personal information.
×
Manage consent