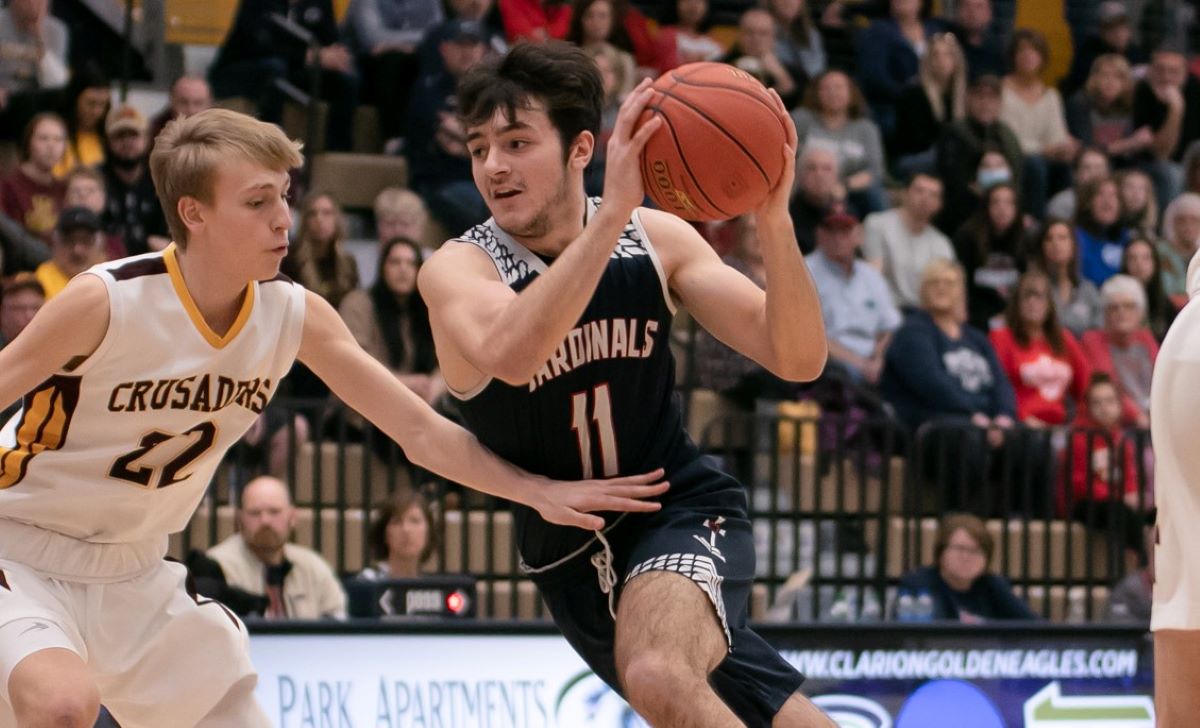 Alec Srock of DCC was the District 9 Player of the Year. Photo by Jared Bakaysa of JB Graphics. See more of Bakaysa's work here

WARREN, Pa. – Alec Srock burst onto the District 9 basketball scene as a junior and just kept getting better and better in his senior year, and that is a big reason the Cardinal is the 2022 D9and10Sports.com District 9 Boys’ Basketball Player of the Year Powered by All American Awards and Engraving.

All American Awards and Engraving specializes in all kinds of awards, trophies, and engraving products as well as screen printing and embroidery. As the company likes to say, they will put almost anything on almost everything. The 2012 Clarion Area Chamber of Business and Industry Business of the Year in Economic Development is located on Route 322 in Shippenville. It can be found on the web at www.allamericanhq.com and can be reached at 1-877-402-9273.

2022 D9AND10SPORTS.COM BOYS’ DISTRICT 9 BASKETBALL PLAYER OF THE YEAR POWERED BY ALL AMERICAN AWARDS AND ENGRAVING

Srock scored 20 or more points 16 times, including topping 30 twice with a career-high of 37 Feb. 7 vs. Huntingdon. He also recorded 22 double-doubles on the season.

2022 D9AND10SPORTS.COM BOYS’ BASKETBALL DISTRICT 9 ROOKIE OF THE YEAR POWERED BY ALL AMERICAN AWARDS AND ENGRAVING

Landon Francis, Fr., Otto-Eldred – Francis was instrumental in helping Otto-Eldred win the NTL Title and finish third in District 9 Class 1A. He averaged 13.4 points, 3.8 rebounds, and 4.8 assists per game while shooting 42% from the field. He was also nearly automatic from the free-throw line nailing 86% (86 of 100) of his charity shots.

Francis topped 20 points three times, including a season-high 30 points vs. Port Allegany on Jan. 20, and was at 15 points or greater 1l1 times.’

2022 D9AND10SPORTS.COM BOYS’ BASKETBALL DISTRICT 9 CHUCK DALY COACH OF THE YEAR AS PRESENTED BY THE CHUCK DALY FOUNDATION POWERED BY ALL AMERICAN AWARDS AND ENGRAVING

Aaron Straub, Elk County Catholic – In his 40th year of coaching the Elk County Catholic boys’ team, the 2022 campaign might have been one of the most rewarding if not most challenging seasons for Straub, and, yet, the Crusaders still won the District 9 Class 1A title (the 24th title for ECC under Straub) and advanced to the PIAA semifinals for the fifth time in school history.

Straub’s team started the year with just eight kids on the bench and never dressed more than 10.

The Crusaders also had a couple of tough losses along the way including a defeat at DuBois Central Catholic in early January, an overtime loss at home to Brookville in early February, and a loss to Ridgway in the AML Title game, a contest in which ECC managed just 23 points.

But Straub never let his club get down on itself, and ECC used the Ridgway loss in the AML game as a rallying cry winning six straight playoff games before falling to eventual state champion, Bishop Canevin in the PIAA 1A semifinals.

ECC finished the season 25-6, the 16th 25-win season for Straub, and the veteran coach won his 900th game as a boys’ coach along the way.

About Chuck Daly: Daly was a 1948 graduate of Kane High School who started his coaching career at Punxsutawney High School (1956-63, 111 wins, D9 title in 1958, and league titles in 1958, 1962, and 1963) before moving into the college and pro ranks where he won two NBA titles with the Detroit Pistons. Daly also coached the 1992 United States Olympic “Dream Team” to a gold medal finish. He was inducted into the James Naismith National Basketball Hall of Fame in 1994. In addition to coaching the Pistons for nine years going 467-271, he spent a little under a season coaching the Cleveland Cavaliers in 1981-82 and coached the New Jersey Nets and the Orlando Magic in the 1990s. He was also the head coach at Boston College and Penn in the college ranks. The NBA continues to honor his coaching legacy with the Chuck Daly Lifetime Achievement Award given annually to a longtime NBA coach’s life in basketball and his “standard of integrity, competitive excellence, and tireless promotion” of the game.

2022 D9and10Sports Boys’ Bball Awards; All-D10 Powered by All American Awards and Engraving Announced
Watch Live: Clariobn County YMCA Girls’ Basketball All-Star Game
We use cookies on our website to give you the most relevant experience by remembering your preferences and repeat visits. By clicking “Accept All”, you consent to the use of ALL the cookies. However, you may visit "Cookie Settings" to provide a controlled consent.
Cookie SettingsAccept All
Manage consent