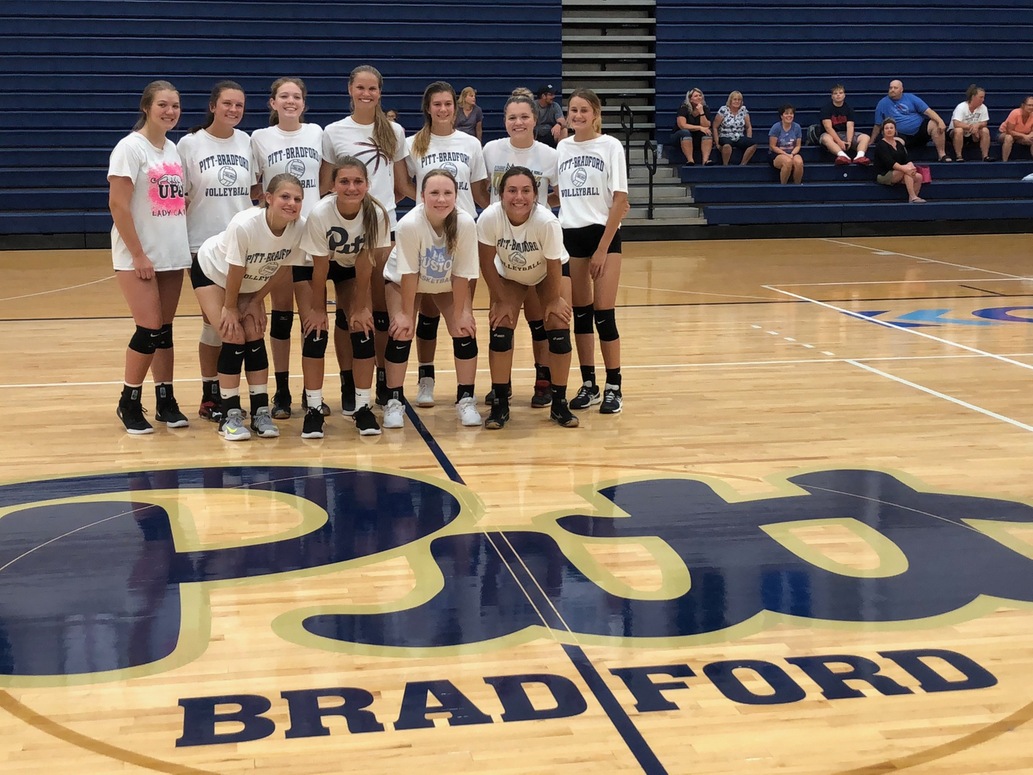 BRADFORD, Pa. – The Pitt-Bradford volleyball team will be hosting three camps in the month of July starting with a three-night junior high camp on July 25-27 from 6-8 p.m. each night.

They will also have their Elite Prospect Camp for high school players on July 28-29 and their team camp on July 30-31.

“Our junior high camp is a great camp for young players to learn and develop their skills while getting introduced to the team aspect of volleyball,” said Pitt-Bradford head volleyball coach Tom Roof. “We also have our two-day Elite Prospect Camp for high school players on July 28-29. This camp is designed for more advanced players looking to improve their game to a higher level that will get them prepared to play in college. Lots of skill and technique work combined with live-action and with sessions on what it takes to be the complete player, both physical and mentally. It’s a great camp that prepares players to become real team leaders

“We also again are hosting our annual team camp July 30-31, though some teams do arrive the night before. This is a great opportunity for coaches and teams to get together just before the start of their season. We also have breakout sessions during the weekend with clinics on setting, hitting, passing, and other elements of the game.”

The junior high camp is open to all players who will be in junior high school, grades 7-8 during the 2022-23 school year. The cost of the camp is $90.00. A camp t-shirt will be provided, for those who pre-register.

The elite camp is open to all players who will be in high school, grades 9 – 12, during the 2022-23 school year. The cost of the camp is $135. A camp t-shirt will be provided, for those who pre-register. Lunch will also be provided and overnight housing is available for attendees.

To pre-register, prospective campers can click on this link  by Monday, July 18th, 2022, in order to guarantee a camp t-shirt. Registrations are being accepted until 5 p.m. on the first day of the camp.(Parent/guardian must be present for same-day registration.)

“We want our camps to be informative and fun,” Roof said. “We want our campers not only to get better at what they do but at least for the older players, teach them something new and to help them to better understand the game. We work at keeping the camp day moving along quickly so everyone is active and there’s not a lot of down time.

“The camp structure is to get everyone involved. We keep our camp numbers where players can get a lot of personal instruction.”

It’s an experience that is beneficial to everyone involved.

“I enjoy these camps for a lot of reasons,” Roof said. “I love the reactions from the younger players when they start seeing themselves get better, and I really enjoy watching our players interact with the campers. It’s good for our team to give back and to take time to help these younger players. And I know our kids love doing it. The team camps are a lot of fun too. We get to know a lot of the players and coaches this way, and it’s fun to see how they do as they go on to their high school seasons.”

And of course, it helps Pitt-Bradford as well.

“The camps, overall, are a great way for our program to get more recognition and more of a following,” noted Roof. “We’ve done very well here and I like recruiting players from the region. There’s a lot of good players from this area and there’s nothing wrong with them thinking Pitt-Bradford first when it comes to making a college choice.”

Roof’s program has had a great deal of success both on and off the court, boasting multiple AMCC championships and NCAA Tournament appearances, as well as a number of All-AMCC selections.

“We’ve done well on and off the court,” stated Roof. “We traditionally play for our conference title and have been to the NCAA national championships. We’ve had some 25 players earn All-Conference honors over the last six seasons, including three who’ve gotten AMCC Player of the Year honors and three who have gotten conference Newcomer of the Year honors. Those are remarkable numbers, In addition, we’ve gotten four AMCC Top Peak Performance awards in the last five years for having the highest team GPA of any team in the conference. Our team GPA typically ranks among the top 20 in the nation.”

And there are certain qualities he looks for when recruiting prospective student-athletes.

“We like players who have played at a high level, both in high school and in club, who have gotten a taste of the kind of competition they’re going to see in college, who have played with and against good players and good teams.”

Sponsored Post: Pitt-Bradford is Perfect Place to Turn Love of Sports into a Career
Sponsored Content: Industrial Tournament Builds Camaraderie, Supports Charity
This website or its third-party tools process personal data.In case of sale of your personal information, you may opt out by using the link Do not sell my personal information.
×
Manage consent