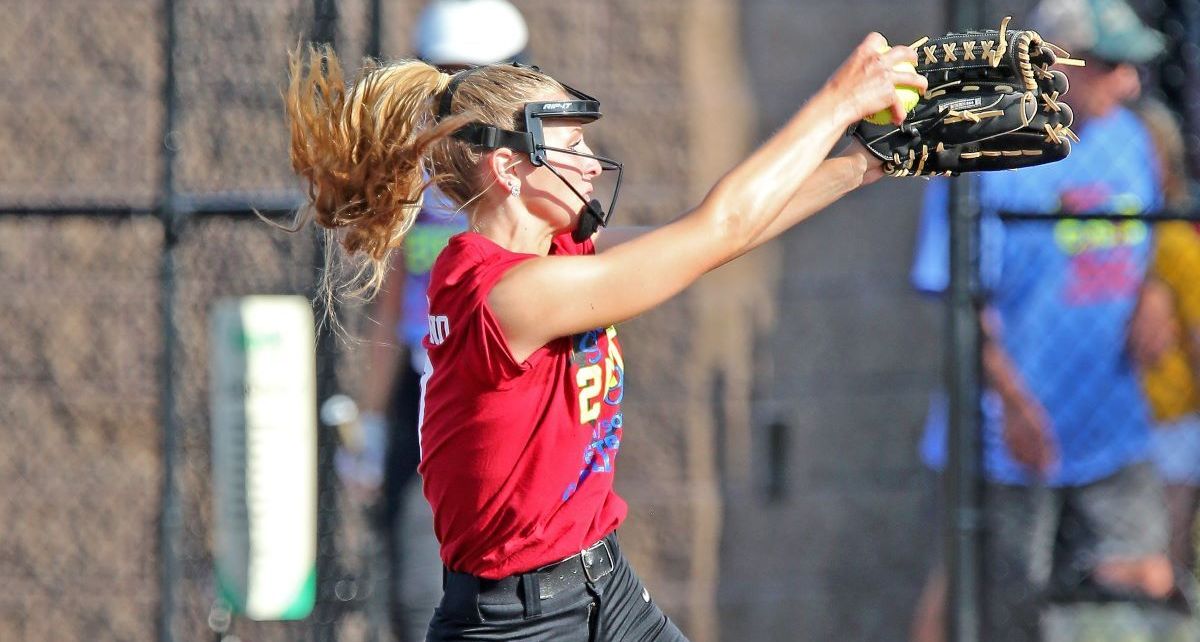 Clarion's Kait Constantino delivers a pitch during Game One. Constantino struck out 13 and also drove in the winning run in the bottom of the sixth in the South's 3-2 win.

DUBOIS, Pa. – The inaugural District 9 North/South Softball Challenge All-Star games were played Wednesday night at DuBois’ Heindl Fields with the South squad sweeping a doubleheader from the North squad by scores of 3-2 in walk-off fashion and 8-6.

The first game was dominated by the South’s Kait Constantino and Jordy Kosko.

Constantino, the Clarion High product who was the District 9 Pitcher of the Year in 2019, the last season of high school softball after the Covid-19 pandemic ruined the 2020 season, was as dominating as the last time she took the circle in a high school game.

She gave up two unearned runs on four hits and two walks while striking out 13 in a six-inning game that also saw her drive in the winning run in the bottom of the sixth with a double down the left-field line in the South’s 3-2 walk-off win over the North.

Kosko, a DuBois Central Catholic graduate, meanwhile, drove in the first two runs for the South in the third inning and then scored the game-winning run.

After the North scored an unearned run in the top of the sixth on a double-steal following a strikeout for the second out of the inning, Kosko got the ball rolling for the South in the bottom of the inning when she singled to left and then stole second.

That brought up Constantino, and she delivered the game-winning hit down the line in left.

The South had taken a 2-0 lead in the first game with both runs coming in the fourth inning.

Kosko drove in both runs with a single to center that scored Clearfield’s Kyra Mollora and Punxsutawney’s Holly Hartman.

Mollora got the inning started reaching on an error, and Hartman and Twigg drew back-to-back walks off of Kane’s Rachel Danielson to load the bases with no outs.

Danielson nearly worked out of the jam striking out Brockway’s Katie McMeekin and then getting Brockway’s Mackenzie Overbeck to foul out to third baseman Hannah Barnett, who made a nice play up against the fencing.

But Kosko picked her teammates up with the base hit to center to make it 2-0.

The North got a run back in the fourth when Maddie Bowes doubled to left and then scored on a two-base error on the third baseman when it looked like she was going to get caught stealing third base only to have the ball go through the glove on the fielder and into left field allowing Bowes, who is from St. Marys, to score.

After the Bowes double, Constantino struck out the next four North batters she faced.

But with the South clinging to the 2-1 lead going to the sixth – both games were played to six innings instead of the normal seven in high school softball – Bowes drew a one-out walk and then Maura Fledderman followed with a base hit to left that saw Bowes got to third on an error.

Constantino came back and struck out Barnett, but Fledderman took off for second on the play and when Madison Stonebreaker from Punxsutawney, who was catching, threw late to second Bowes sprinted home to tie the game.

In the second game, the South used a six-run second inning to build an 8-1 lead and then held off a late North rally that saw the northerners scored three times in the bottom of the sixth, to get the 8-6 win.

The big hit in the second inning was a bases-loaded single to right field by DuBois graduate Maddie Ho that turned into a “Little League” grand slam when the right fielder had the ball go by her for a three-base error. Shay Gulvas, a DCC grad, then added a two-run single later in the inning to make it 8-1.

Gulvas drove in the game’s first run with a triple to left in the top of the first scoring Kosko, who had started the game with a bunt single. Stonebreaker then drove home Gulvas with a grounder that an error was committed on to make it 2-0 the South.

The North got a run back in the bottom of the first when it loaded the bases against Karns City grad Logan Byers with no out on a single, a walk and a hit batter. Byers then hit St. Marys’ Megan McMakin to drive in the North’s first run.

But the South caught a break when Britney Shaw tried to score on a wild pitch only to have Stonebreaker beat Shaw to the plate for the tag out.

Then, after Bowes, walked to reload the bases, Byers got a foul out and a pop out to limit the damage.

Down 8-1, the North tried to mount a comeback scoring single runs in the second and fourth to make it 8-3.

In the second, ECC grad Maddie Taylor reached second on an infield single and a throwing error before going to third on a wild pitch and scoring on a single to center by St. Marys grad Tessa Grotzinger.

Then in the fourth, Grotzinger scored on a two-out single to left by Johnsonburg grad Maria Jones to make it 8-3.

The game remained 8-3 until the sixth when the north took advantage of a pair of South errors to make things interesting.

With two outs, Shaw singled to left and went to third when the ball got past the left fielder. She then scored when a fly ball to left by Jones clanked off the glove of the left fielder with Jones going to second.

McMackin and Bowes followed with back-to-back doubles to left and left-center respectively to make it 8-6 brining up Barnett as the tying run.

But Byers bore down and struck out Barnett looking to secure the sweep.

The DuBois Little League helped in making sure the game could be played Wednesday by moving its originally scheduled Little League contest.

While there was no admission charge, donations were collected at the gates for the United Way, and it was announced that $400 was raised.

Welcome to Your New Home for District 9 and District 10 Athletics
We use cookies on our website to give you the most relevant experience by remembering your preferences and repeat visits. By clicking “Accept All”, you consent to the use of ALL the cookies. However, you may visit "Cookie Settings" to provide a controlled consent.
Cookie SettingsAccept All
Manage consent