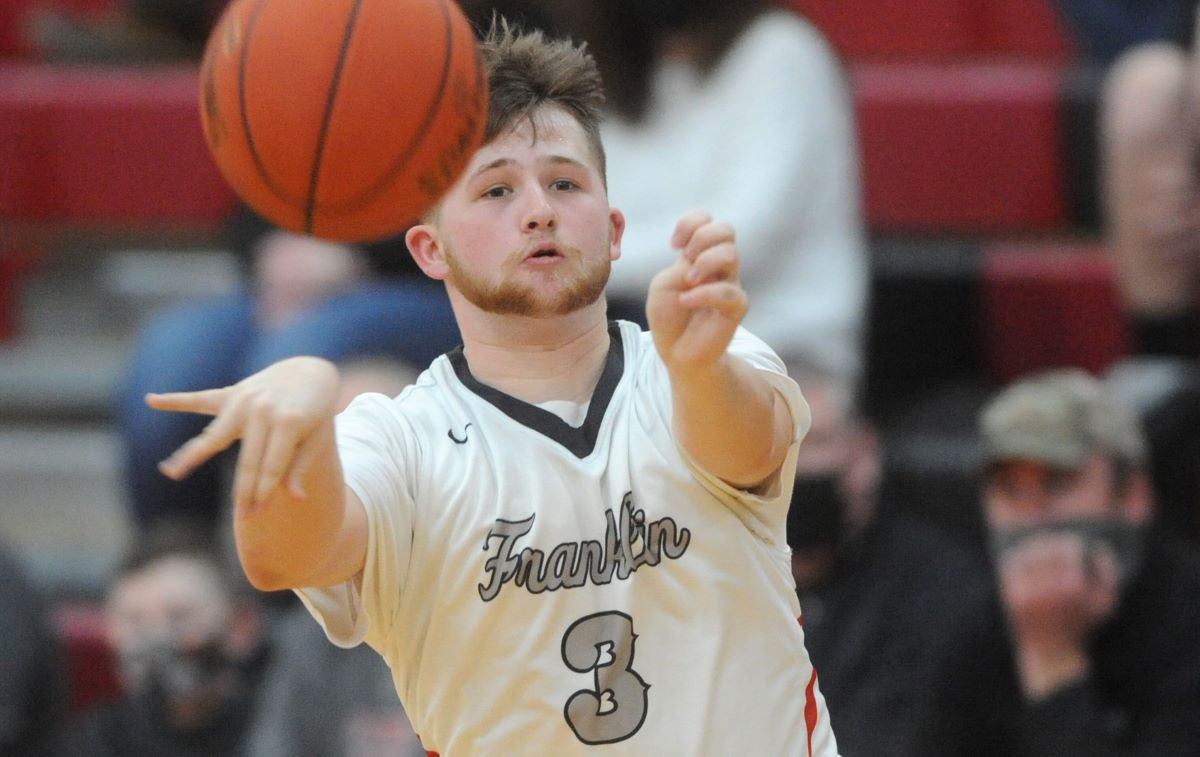 Zak Smith of Franklin hit four third-quarter 3-pointers on his way to 17 points, as the Knights beat Seneca in the first-round of the D10 Class 3A playoffs Friday night. Photo by Richard Sayer of Eight and 322

FRANKLIN, Pa. – Zak Smith caught fire in the third quarter knocking down four 3-pointers in the frame to help top-seeded Franklin go from a one-point halftime lead to a 25-points, 68-43, win over visiting and eighth-seeded Seneca in the District 10 Class 3A first round Friday night at The Castle in Franklin.

“It felt pretty good getting back into my normal grove and everything,” Smith, who scored a season-high 17 points, including 15 in the second half said.

But Franklin scored the final five points of the half, all by Easton Fulmer, to take a 25-24 halftime lead.

Easton Fulmer of Franklin takes a shot during Friday’s game. Photo by Richard Sayer of Eight and 322

That 5-0 spurt by Fulmer was part of a large 32-4 Franklin run that concluded a minute into the fourth quarter with a 3-pointer by Hayden Adams. That included the Knights outscoring the Bobcats 24-3 in the third quarter and gave Franklin a 52-28 lead.

“He (Franklin coach Jason Fulmer) said to just get back to our normal selves,” Smith said when asked what the halftime message was. “The first team to start playing their basketball, that’s the team that ends up winning.”

Franklin, a high-flying team that came into the game as the second-highest scoring team in District 10 at 64.4 points per game, was that team that got back to its “basketball”.

Thanks in large part to Smith, the Knights hit eight of their nine 3-pointers in the second half, including five in the third quarter.

Equally important to the second-half success for Franklin was its defense.

After Evan Shouey scored on a layup 33 seconds into the third quarter to get Seneca within two, 28-26, the Knights’ defense didn’t allow another Bobcat field goal for another 8:41 seconds, over a quarter, of basketball, when Kibbe finally hit a 3-pointer with Seneca down by 24.

Watch Shouey score his layup early in the third quarter

Only two points, a pair of free throws by Shouey – one in the third quarter and one in the fourth – were scored by the Bobcats during that stretch.

“We played defense extremely hard,” Smith said. “That was an adjustment we made at halftime. We switched a couple of guys, and it ended up working for us in the end.”

The biggest adjustment for the Knights came in how they defended Seneca’s Bobby Yost allowing Yost just two second-half points – they came with under two-and-half minutes to play – after Yost had hit three first-half 3-pointers to help the Bobcats be competitive.

While Seneca was struggling, Franklin got scoring from a variety of players in the second half in addition to Smith.

Luke Guth scored 11 points in the half, including nine in the third quarter, on his way to tying Smith for game-high honors with 17.

Hayden Adams added 13 points, including six in the second half for the Knights, while Fulmer ended with 11 points.

Watch Cade Adams drive for a layup in the first quarter. It was his only basket of the game.

Yost was the lone Seneca player in double digits with 11 points, while Kibbe and Shouey each scored eight.

Franklin will host Greenville, a 46-44 winner over Girard.