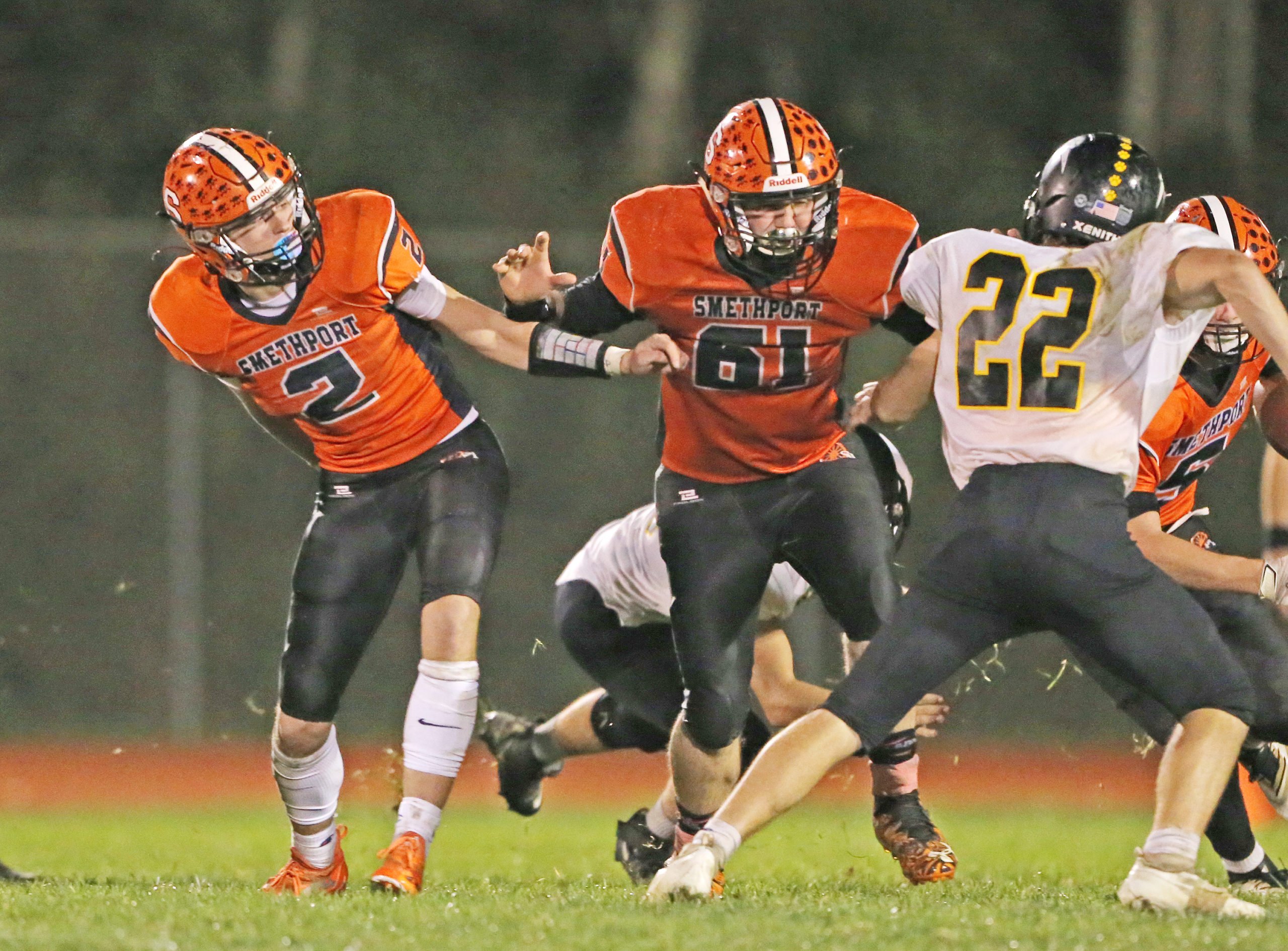 SMETHPORT, Pa. – The Smethport offensive line has been the unsung heroes of the Hubbers’ 2021 season, and that theme continued on Friday.

The Hubbers’ ground game and defense was once again the driving force behind win No. 7 of the season, 26-6 over Keystone.

“I’m really proud of them,” said Smethport coach Adam Jack. “They’re a young line, with the exception of Travis Cooney, all the others are first-year starters. Credit to all of them. Cole Szuba, Tavis of course, Hayden Leet, Logan Hurlbert and Keegen Watson.”

They allowed Lent to have another big game with 227 yards and three scores on the ground, while Ryan Mason added the other touchdown and Ryan Pelchy, making his return from an injury, had 71 yards as well.

The game felt a bit like a boxing match early on, with each team feeling each other out. Neither team was able to dent the scoreboard until Lent’s 1-yard touchdown plunge with 2:31 to go in the first half. Lent added the extra point, capping a 7-play, 76-yard drive to make it 7-0. Those were the only points of the first half.

The Hubbers’ defense time and again thwarted quarterback Bret Wingard and the Keystone (5-2) offensive unit, batting down a number of pass attempts at the line of scrimmage and limiting the Keystone rushing attack to just 38 yards for the game.

“We told the kids in practice and reps all week that if you can’t get there, get up in the air and try to deflect the ball,” Jack said. “I think we struggled a little bit in coverage in the second half once Alex (Ognen) went down. We had to move some guys around a little bit, but I told the kids I’m super proud of them for finding a way to win in an adverse situation, which is going to happen again as we move down the road.”

A short Keystone punt midway through the third quarter set up a 37-yard drive that was capped by a Mason 1-yard plunge to make it 14-0.

“I really think we did well up front tonight,” Cooney said. “We struggled with that the last few weeks but really came through.”

Cooney, who had another big game on defense as well, was named the Allegheny Grille of Foxburg Player of the Game.

After another stop by the Hubbers’ defense, Smethport got the ball back and Lent had perhaps his best run of the night, a 40-yard scoring scamper that put the game out of reach at 20-0 early in the fourth quarter.

Wingard got the Panthers on the board just over two minutes later on a 1-yard plunge, set up by a long pass to Tyler Albright.

Kyle Nellis led Keystone’s ground game with 41 yards, as the Panthers were playing without a pair of starters on the offensive line.

Smethport’s final score came courtesy of Pelchy and Lent. Pelchy pounced on a ball at the Keystone 1-yard line following a bad snap, and Lent punched it from there to cap the scoring with 3:06 to go in the game.

Keystone had a chance to score late, inside the Smethport five, but Aiden McKean put any thoughts of that to bed with an interception.

Wingard finished 10-of-23 through the air for 120 yards, with Albright catching three passes for 56 yards and Ian Keth four for 41.

Smethport’s Travis Cooney was named the Allegheny Grille of Foxburg Player of the Game.

Both teams will be playoff-bound in Class 1A, but the game obviously had major implications in terms of seeding.

The two teams came in second and third respectively in Class 1A power points this week, with Smethport at 710 and Keystone at 620. Redbank Valley had 730 going into Friday’s action.

“Keystone, I’ve said this several times now, Ryan Smith and his staff always put together a good team,” Jack said. “They’re a bunch of hard-nosed kids that come out and play hard for 48 minutes. That was a big win for us. We knew they were going to come in hungry coming off their first loss last week, but I’m sure they’ll rebound and we’ll be seeing them in the playoffs.”

Oct. 15, 2021 D9 Football: Archer Helps Port to Key Win Over Brockway; DuBois, C. Clarion Continue Rebounds; Clearfield Gets Another Shutout
Oct. 16, 2021 D10 Football: Northwestern Stays Perfect; Sharpsville, Wilmington Roll to Wins
We use cookies on our website to give you the most relevant experience by remembering your preferences and repeat visits. By clicking “Accept All”, you consent to the use of ALL the cookies. However, you may visit "Cookie Settings" to provide a controlled consent.
Cookie SettingsAccept All
Manage consent