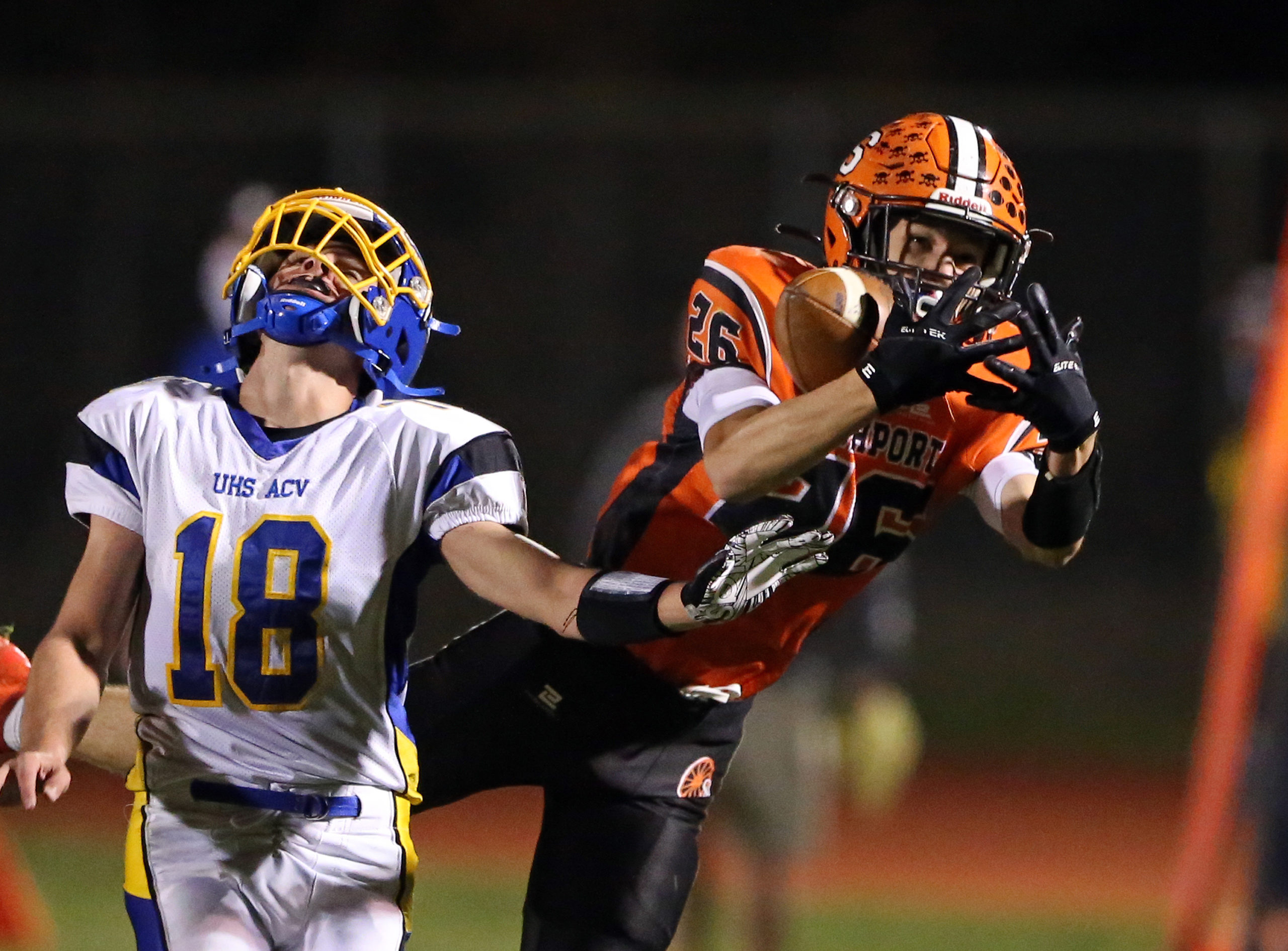 Ryli Burritt hauled in the game-winning touchdown pass for Smethport on Friday. (Photo by Paul Burdick. Check out more of Burdick's work here)

SMETHPORT, Pa. – Banged up and with their backs against the ropes, Smethport and junior quarterback Noah Lent delivered a counter-punch for the ages on Friday night.

Trailing 10-6 in the fourth quarter, Lent fired a 22-yard touchdown strike to Ryli Burritt with 7:02 to play and the Hubber defense, like they have done all season, closed the door in a 12-10 District 9 Class 1A semifinal win over Union/A-C Valley on Friday.

Relisten to the Game

“It says that they’ve got resilience and they showed it,” Smethport coach Adam Jack said of his team. “We needed to be battle-tested and tonight was that night. I’m having a hard time coming up with the words tonight. They found a way to get it done when they needed to.”

Lent left last week’s game against Coudersport with an injury, and his status for the semifinal was uncertain. Not only did he play, he produced a signature performance in a game where he was asked to throw the ball more than he has all season.

Attempting 47 passes on the season coming into the game, Lent threw 23 times in this one, completing 14 for 193 yards and two scores. The Hubbers had to throw the ball, because running just wasn’t an option against a stout Falcon Knights front.

Noah Lent captured the Jim Kelly Player of the Game Award Powered by the Allegheny Grille.

Neither team could get anything going offensively until a 65-yard Smethport drive in the second quarter that took almost seven minutes off the clock ended with a Lent to Brandon Higley 11-yard touchdown to make it 6-0 with 2:21 left in the half.

“Noah stepped up in a big way tonight,” Jack said.

Union, which was limited to just 52 yards of total offense, scored all of its points off special teams in the final moments of the first half.

Tanner Merwin took the ensuing kickoff 85 yards to the house, and Colton Murray’s extra point made it 7-6.

Trying to get something going before the half, Lent was intercepted by Carter Terwint, setting the Falcon Knights up with a short field, which they took advantage of.

Murray’s 24-yard field goal attempt sailed through the uprights as time expired in the first half to make it 10-6.

“Special teams, we’ve been working hard on them all year,” said Union/A-C Valley coach Brad Dittman. “Merwin and (Caden) Rainey are a threat to take it to the house every time they touch it if we get blocks for them, and we were able to do that tonight. Obviously Colton Murray, for the most part, has kicked the ball well all year, so we had no issue kicking the ball at the end of the half.”

They didn’t have an issue shutting down Smethport’s vaunted rushing attack, either.

The Hubbers didn’t need to throw the ball to have success on offense during the regular season, but when they needed to on Friday, Lent, Higley and Burritt answered the bell.

Lent earned the Jim Kelly Player of the Game award powered by the Allegheny Grille of Foxburg.

Jack was also particularly proud of the senior Burrit.

“I can’t say enough about the game Ryli Burrit had tonight,” Jack noted. “Making plays out there when we needed to … that kid has been growing every single year, and tonight was his coming out party.”

Braedon Johnson, who was bottled up after a brilliant performance against Coudersport last week, came up with the game-sealing play, hauling in a 30-yard pass from Lent on the final drive to help run out the clock.

Smethport advances to play the winner of Saturday’s Coudersport at Redbank Valley game (4 p.m.) for the Class 1A title on Oct. 31.

“I’m excited for the kids, the town, the community,” Jack said. “We’re going to take it one game at a time and next week will be no different. We’ll go through all the same routines and be ready to go on Saturday.”