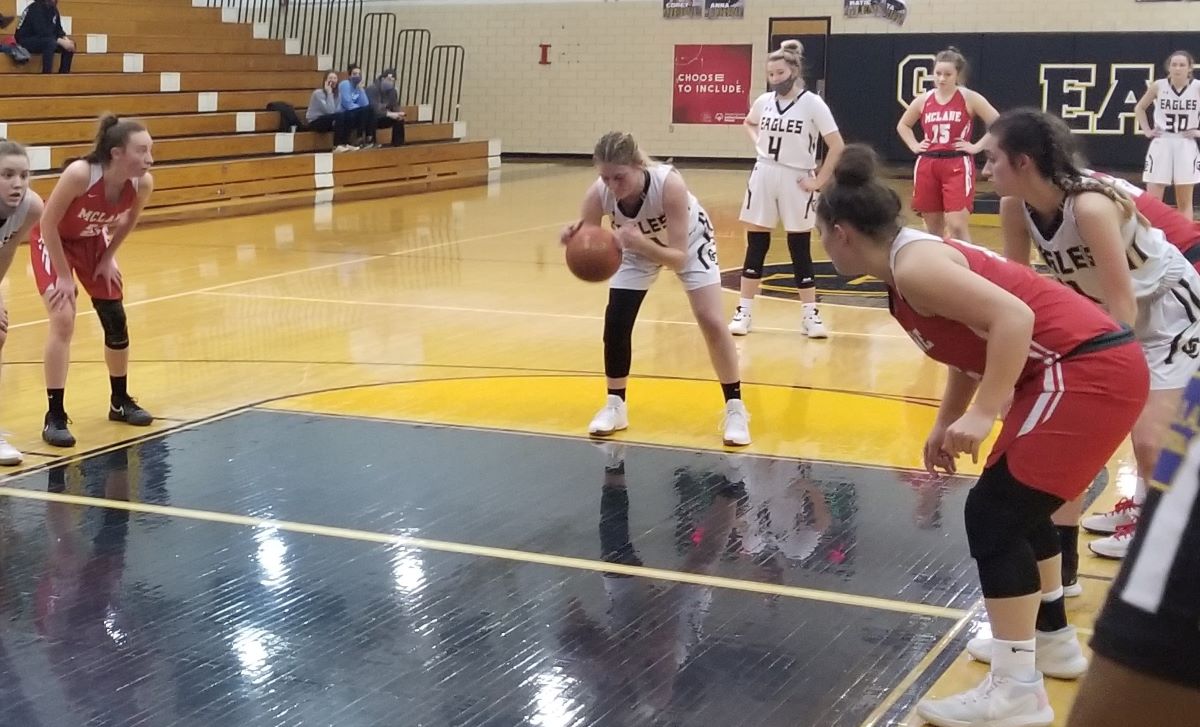 GROVE CITY, Pa. – Something needed to happen and happen fast if defending District 10 Class 5A champion Grove City wanted to get out of its opening-round playoff game against visiting General McLane Saturday afternoon.

The Eagles had watched an 11-point halftime lead, 22-11, dwindle to one, 25-24, by the end of the third quarter thanks to the hot hand of General McLane’s Emily Hess.

The momentum was clearly on the Lancers’ side.

But then Grove City changed up its defense every so slightly and the game once again changed in the blink of an eye, as the Eagles held General McLane scoreless in the fourth quarter on their way to a 39-24 win.

“We came out and just kind of extended our 1-3-1 a little bit,” Grove City head coach Chris Burtch said. “It wasn’t just a full-out press trap. It was more just our regular sort of 1-3-1. We are going to extend it out. We are going to try to speed them up. Get them out of running all the sets. Sarah (GM head coach Sarah Shulz) does such a good job with having them prepared to run sets. They take time. They are very patient. The game, in the third quarter, was to their strength. I felt like we had to do something, sort of speed the game up.”

The impact of the defensive change was felt in a 39-second span midway through the fourth quarter that decided the game.

With Grove City still clinging to just a three-point, 27-24, lead, Clara Hannon came up with a steal that led to a Becca Santom fast-break layup on the other end at the 4:39 mark.

Hannah Reiber then got another steal and fed Hannon for a basket at 4:25.

Reiber was at it again on the inbounds pass coming away with a second straight steal. She again fed to Hannon, who scored, was fouled, and made the foul shot with exactly four minutes to play giving the Eagles a 10-point lead, 34-24.

“Those were huge,” Hannon said of the steals and the ensuing baskets. “Not only are they baskets, they bring the whole team’s energy up. They were definitely huge.”

Hannon’s energy level was definitely rose, as she gave a big fist pump after her first basket made it 31-24.

“That was everything,” Burtch said of the 7-0, 39-second spurt. “That was a great steal by Hannah (that led to the Hannon 3-point play). Becca and Clara were unbelievable finishing at the end there. It didn’t seem like it took much time, did it?”

Until that run, the second half had been about General McLane and Hess.

After shooting just 4 of 22 (18.2%) in the first half, General McLane, led by Hess, came out firing on all cylinders in the third quarter.

Starting with a 3-pointer 10 seconds into the second half, Hess scored seven of General McLane’s first 10 points of the half to slice the Grove City lead to three, 24-21, just 3:07 into the third quarter.

“No. 42 (Hess) for General McLane is a great player,” Hannon said. “It seemed like she was making everything. We got down a little bit, but we knew our man-to-man and our halfcourt trap was going to hold them off.”

Burtch said General McLane was able to isolate Hess in the third quarter.

“Basically, Hess was playing one-on-one,” Burtch said. “In the first half, their man offense was more of an equal opportunity offense. Then, all of a sudden, they just started to ISO Hess. She is a really good player. She’s really tough to guard one-on-one. I was just a little tardy, I think, just getting out of that straight halfcourt man defense. McLane almost made us pay for it. I give the girls a lot of credit. You know, there was a decision my assistant coach pushed me on to get into that halfcourt trap. Getting out of the man and staying in that was a key.”

It also didn’t hurt that Grove City had two great players of its own in Hannon and Santom, both 1,000-point scorers.

Santom led the Eagles with 14 points, eight rebounds, and a steal, while Hannon added 13 points, seven rebounds, and four steals.

Both were consistent throughout with Hannon scoring the first five points of the game for Grove City helping the Eagles to an early 7-1 lead.

Santom then took over in the second quarter scoring six of her points in the frame to help extend the lead to the 11 points at the break.

With the victory, Grove City gets a third shot at rival Slippery Rock in the District 10 semifinals at 7 p.Wednesday at Slippery Rock. The Rockets used a big second half to beat Conneaut (Pa.), 42-24. Slippery Rock beat Grove City in both regular-season meetings winning 42-12 Jan. 28 in Grove City and 52-30 Feb. 22 in Slippery Rock, two of the three losses of the season for the Eagles (15-3).

“It means a lot (getting the semifinals),” Hannon said. “This program, in the past (before last season), hadn’t even won playoff games. So, for me in my senior year to win a playoff game means a lot.”

General McLane, which finished the season 5-10, ws led by Hess’ 10 points, four rebounds, and a steal. Sam Herberg had a game-high nine rebounds to go with three points, while Ellie Shade scored six points on a pair of 3-pointers.