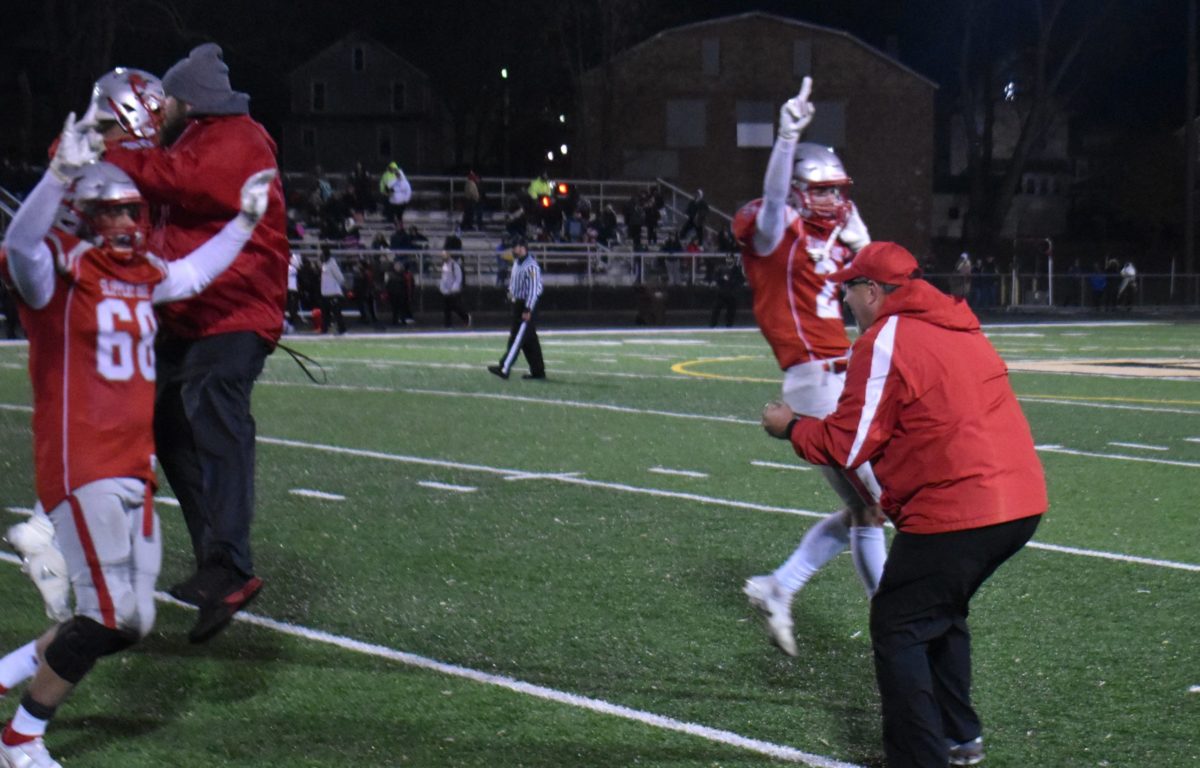 The Slippery Rock Rockets and Grove City Eagles have a rematch on their hands and the stakes couldn’t be higher, with the District 10 Class 3A title to be decided.

Here’s a look at Saturday’s action.

These two teams met back on Sept. 17, a 34-7 win for Slippery Rock. Last week in the semifinal round, both teams avenged regular-season losses, with Slippery Rock edging Hickory 23-17 with an Andrew Massella interception late in the fourth quarter sealing the deal, and Grove City beat Fort LeBoeuf 35-21.

Slippery Rock welcomed back a pair of key players from injury last week – Shane Thompson and WIlliam Mokel, and both had a huge hand in the win over Hickory. Thompson ran for 154 yards and a touchdown and also had a 91-yard kickoff return for a score in the second half. Mokel, meanwhile, threw for 83 yards and a touchdown to John Sabo and also added a rushing touchdown.

Thompson is averaging 8.7 yards per carry on the season on 323 yards. Also, look for Ryan Montgomery (315 yards) in the run game and Maddox Allen (284 yards). Sabo is Mokel’s top target with 27 receptions for 514 yards and nine touchdowns. Mokel has thrown for 950 yards and 13 scores while rushing for five more touchdowns.

Grove City’s Hunter Hohman had a monster game in the win over Fort LeBoeuf, passing for three touchdowns and rushing for two more, helping break a 21-21 fourth-quarter tie. On the season, Hohman has thrown for 1,854 yards and 21 touchdowns and added five more touchdowns on the ground.

In the first meeting, Mokel had a big game, throwing for 215 yards and three touchdowns, while Hohman threw for 149 yards for Grove City.

The winner will take on the winner of Central Martinsburg and Bedford (Friday, Hollidaysburg, 7 p.m.) in the PIAA quarterfinals.

PIAA CLASS 4A FIRST ROUND

It’s no secret what the Bulldogs want to do on offense, but it’s their defense that has perhaps been underrated this season. They own four shutouts, all four coming in a row against Warren, Conneaut, Franklin and Oil City. They’ve also given up just seven points in a game twice.

In their previous District 10 championship season in 2016, the Bulldogs put up 76 points the following week in a win over Hollidaysburg before falling to West Allegheny, 47-20. That team was led by standout Journey Brown, and this team has that same potent rushing attack.

Juniata, meanwhile, is coming off an 8-0 win over University Prep following a 41-12 win over Bellefonte in the District 6 title game.

Since starting the season 2-2, the Indians have rattled off eight straight wins. Like Meadville, their defense has been excellent, with five shutouts on their resume.

Jacob Condo has thrown for 335 yards and a touchdown through the air.

The winner will advance to play the Allentown Central Catholic/Jersey Shore winner next week.

After their second win over Wilmington this season, 48-16 for the District 10 championship, the Farrell Steelers begin their quest to Hershey with a date with Westinghouse.

Farrell running back Anthony Stallworth is one of a plethora of talented playmakers for the Steelers. In the win over Wilmington, he rushed for 325 yards and four touchdowns on just 10 carries. For the season, he has rushed for 1,903 yards and had 27 total touchdowns.

The Steelers have scored at least 40 points in every game this season, averaging just over 56 points per contest.

Not only has Stallworth got it done on the ground behind the Steelers’ big and physical offensive line, but they have had plenty of success through the air as well.

Taidon Strickland, Anthony Jackson, Brandon Chambers and Lamont Samuels help lead a defense that has been absolutely suffocating. The most points they have allowed this season is 21 in a 48-21 win over Fort LeBoeuf. Included in that run are four shutouts. They are giving up just six points per game on the season, with most of those points allowed coming in garbage time.

Westinghouse does have a win over a District 10 foe this season, beating Butler 44-34.

Keyshawn Morsillo had a huge game in the win over Windber, accounting for four touchdowns and 248 yards through the air and another 99 on the ground. Malik Harris had 23 carries for 162 yards.

Westinghouse has also scored 35 points in eight of its 10 victories this season.

The winner moves on to play the winner of the District 9 championship between Karns City and Ridgway next week.