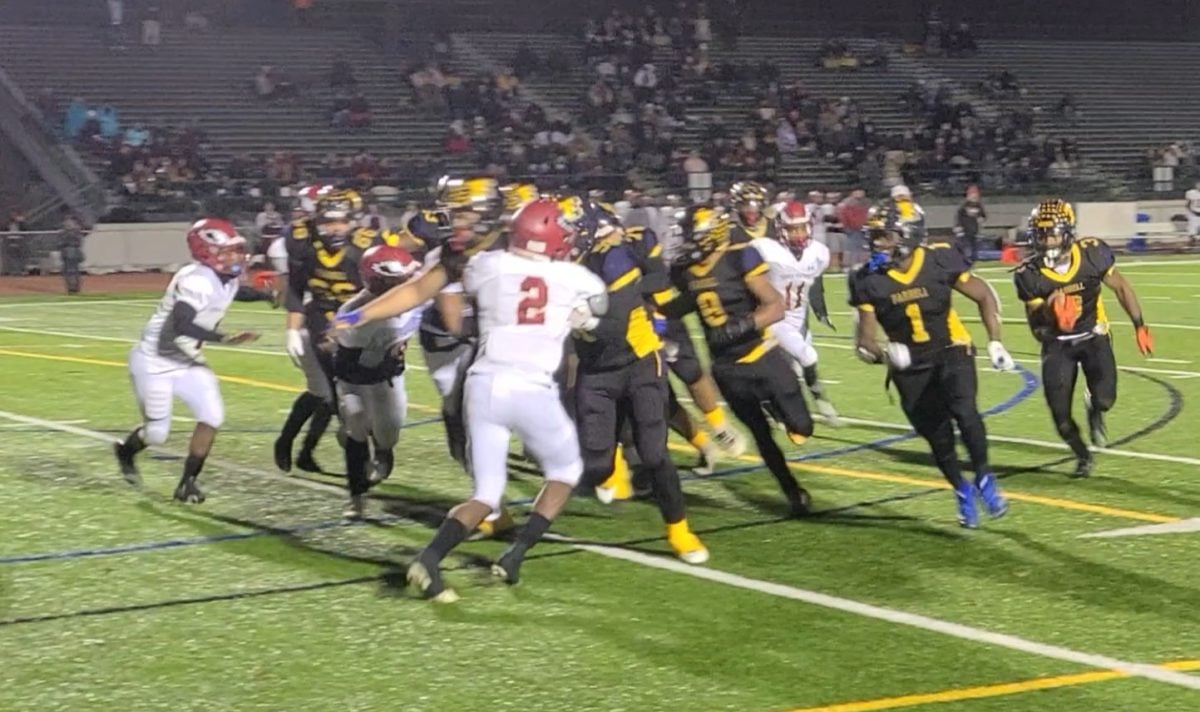 SLIPPERY ROCK, Pa. – Oh what could have been for Farrell.

The Steelers were seeking their third trip to a state championship game in the last four years and their first in Class 2A, but opportunistic WPIAL champion Serra Catholic had other ideas. The Eagles forced six turnovers en route to a 27-18 win over the Steelers and a trip to Hershey.

“They attack the ball and are a very good team,” said Farrell coach Amp Pegues. “For us, this is one of those learning experiences. This is a great senior class that is going to go on and do big things in life. I just told my kids that this is a 12-month team, we’re not a 7-month team.”

With the win, Serra Catholic moves on to play Southern Columbia in the state championship game next Friday at 1 p.m.

“You never think coming into a game that you’re going to have that many penalties and that many turnovers,” Pegues said. “It seemed like every time we wanted to get something going there was a penalty or a turnover.”

Trailing 20-12 at halftime and at the end of the third quarter, the Steelers struck for the first points of the second half via a Trian Holden to Taidon Strickland 65-yard touchdown pass that made it 20-18. The Steelers received a 15-yard unsportsmanlike penalty for spiking the ball, setting up the 2-point attempt at the 17, which Serra was able to stop.

Still, however, Farrell had all the momentum. It turned out to be very short-lived.

On the first play of the Eagles’ ensuing drive, Max Rocco connected with Jayvon Holt on a 68-yard touchdown pass that, coupled with Caden Bauer’s extra point, made it a two-score game at 27-18. That play accounted for nearly half of Serra’s offensive output for the game.

“We found a way,” said Serra Catholic head coach Jose Regus. “We just find a way to get things done. “That play was open, we saw it and the quarterback (Rocco) went with the read and made the right read.”

That proved to be too much to overcome for Farrell, as Holden was intercepted on the next drive. It’s part of a defensive effort for Serra that has seen them force 21 turnovers in the four games and 54 on the season.

“We have a lot of playmakers out there,” Regus said. “We practice it and they’re performing on game day.”

Anthony Stallworth was a workhorse in his final game in a Steelers’ uniform, carrying the ball 30 times for 192 yards and a touchdown, with 143 of those yards coming in the first half.

Stallworth’s 5-yard touchdown run capped a 45-yard drive with 1:58 to go in the first quarter that opened the scoring.

That began a string of back-and-forth scores, including two in the span of 1:30 for Serra Catholic

Terrell Booth got the Eagles on the board with 25 seconds to go in the first quarter on an 8-yard touchdown run, putting the finishing touches on a 60-yard drive that took just over a minute. Booth also had two interceptions in the game.

Serra forced a three-and-out on the next Farrell possession, and a mishandled punt gave the Eagles the ball back at the Steelers’ 4-yard line. Pharaoh FIsher took the ball into the end zone on the next play, giving the Eagles a 13-6 lead after Bauer’s extra point.

It was a lead they didn’t relinquish.

Farrell was able to counter, however.

The Steelers drove the ball to midfield, where they faced a fourth-and-4. Holden was able to find a wide open Lamont Samuels Jr. over the middle and he raced untouched into the end zone to make it 13-12 after the failed 2-point attempt.

Farrell once again found a way to make the passing game work in spots despite not having the services of leading receiver Kylon Wilson, who was once again limited due to injury.

After a stop, the Steelers got the ball back, but Jaden Williams stepped in front of a Holden pass, picked it off and took it to the house for a 42-yard score to make it 20-12.

“It was just a bad day, but this is nothing new for them (Serra),” Pegues said. “They’ve been doing this to teams all year and they did it to us tonight.”

Holden finished with 193 passing yards, 102 of which went to Strickland.

And Pegues was proud of the effort of his team in a season that ended just short of their ultimate goal.

“I’m just proud of my guys,” he said. “There were points in this game where they could have laid down and packed it in, but they fought to the end. Our goals every year are the same. We’re not going to change that. We’re going to come back and try and get another state title next year.”