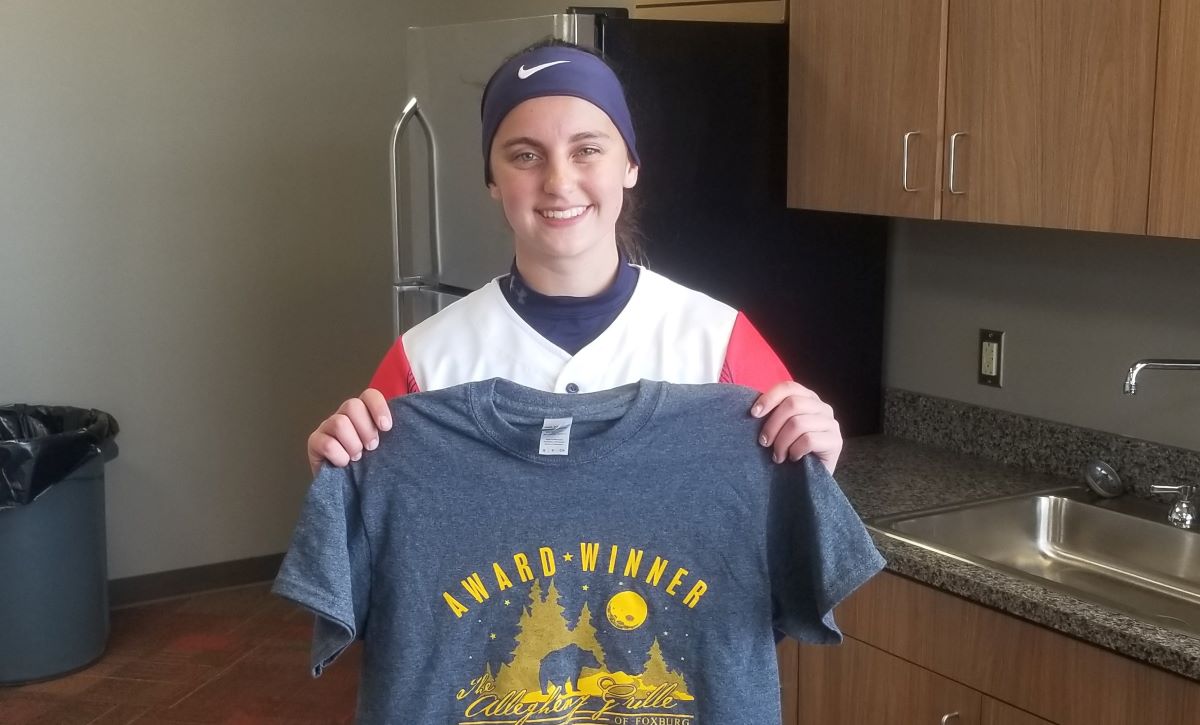 DUBOIS, Pa. – Scoring six runs with two outs in the fourth inning, DuBois Central Catholic made a statement with a 10-0, five-inning win over visiting Otto-Eldred at Heindl Memorial Field in a battle of what many believe are the top two District 9 Class 1A softball teams.

“It was definitely us vs. them,” DCC winning pitcher Madi Hoyt said. “We were really nervous. We looked at their stats. This is going to be a good game definitely.”

For 3 ½ innings, the game lived up to its billing with neither team being able to score in what was a fast-moving game at that point – it took just a hair over 48 minutes to play 3 ½ innings.

But Otto-Eldred made a pitching change in the bottom of the fourth going from Abby Wolfe, a lefty who had shutout DCC on four hits in the first three innings, to right-hander Bri Heller.

Heller gave up a single to Melia Mitskavich leading off the inning and then issued a one-out walk to pinch hitter Eva Bloom.

But Heller was in position to get out of the inning when she struck out pinch hitter Savannah Morelli and then got ahead of leadoff hitter Kaylee Risser 1-2.

Risser, however, worked the count full before lining a ball into the right-center field gap just out of the reach of Otto-Eldred second baseman Kyla Andreano that went for a triple giving the Lady Cardinals a 2-0 lead.

“That started us,” Hoyt said. “We were all talking. After that, we were all going to hit after that.”

Otto-Eldred had a chance to stop the inning right there moments later when Lady Terrors’ catcher Katie Sheeler made a snap throw down to third to try to pick off Risser. The ball glanced off the glove of third baseman Hannah Gordon, just into the game when Heller moved from third base to the circle.

Risser decided to break for the plate when she saw that happen, but Otto-Eldred shortstop Emmalee Sheeler backed the play up nicely and got Risser caught in a run down.

From there, things fell apart for Otto-Eldred.

First, Emma Suplizio walked, stole second, and went to third when the throw by Katie Sheeler went into centerfield.

Mia Meholick then drew a walk and never stopped after rounding first when the ball was thrown back to Heller. Heller fired and threw to second, but Suplizio broke for the plate and scored when the throw home by Emmalee Sheeler was high making it 4-0. Meholick took third on the play.

Chelsea Busatto then walked, the third walk in a row for DCC and its fourth of the inning, before back-to-back errors on Emmalee Sheeler at shortstop scored two more runs to make it 6-0. In all, the inning took 25 minutes to play, and DCC sent 11 batters to the plate.

DCC then put the game away in the fifth inning scoring four more times thanks to four hits and two walks with the final hit being a base hit to left by Busatto that scored Suplizio, who had walked, from third.

While DCC was scoring 10 runs, Hoyt was in a grove retiring the final five she faced and eight of the final nine with the only base runner, Kate Rhinehart, reaching on a two-base throwing error by Jessy Frank.

In fact, after giving up back-to-back walks with two outs in the second, Hoyt retired 10 of the final 12 batters she saw, including getting Suzie Rounsville looking to end the fifth inning.

Hoyt, who was the Allegheny Grille of Foxburg Player of the Game, ended up going five innings allowing just two hits and three walks while striking out four.

“I think my curveball was going pretty well,” Hoyt said. “At first, I got a little nervous because in the bullpen I was throwing it a lot inside or outside. But I brought it back in, and it was working really well.”

Katie Sheeler and Wolfe had the hits for Otto-Eldred.

May 8, 2021 District 9 Baseball/Softball Recaps: Mullins Tosses Shutout for Curwensville; DuBois Softball Wins
Top Seeds Hold Serve, Advance to Finals at D10 Singles Tennis Tournament
This website or its third-party tools process personal data.In case of sale of your personal information, you may opt out by using the link Do not sell my personal information.
×
Manage consent