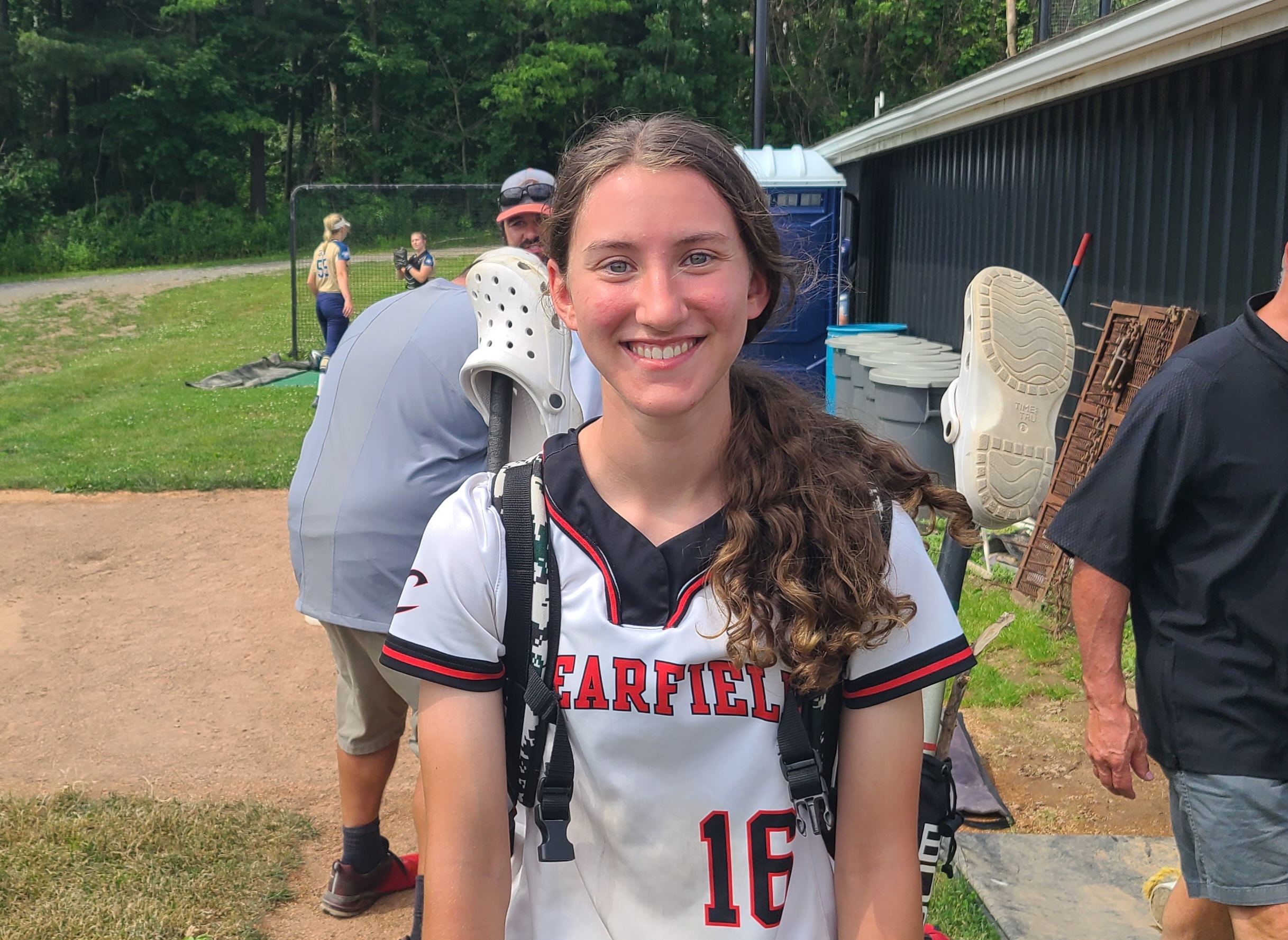 LORETTO, Pa. – Ruby Singleton and Clearfield were in the mood to make a little history in their PIAA Class 4A semifinal game against Beaver Area.

Singleton, a sophomore, stepped to the plate in a 1-1 game with two outs and the bases loaded in the bottom of the seventh and promptly delivered a sharply hit single that sent the Lady Bison to the state championship game for the first time in program history while ending the defending state champion Bobcats’ 42-game winning streak in the process.

The moment was pure bedlam, as the Lady Bison, perhaps in shock themselves, waited a moment before realizing the game was over and they had won.

“It was a lot of pressure,” Singleton said. “I was actually hoping that Emma (Hipps) would get it, but Im also glad I got the opportunity. It’s a once-in-a-lifetime type thing. I just went in the box and when I saw that pitch I hit it.”

All of Clearfield’s offensive damage on the afternoon came with two outs. Beaver pitcher, Virginia Tech commit Payton List retired the first two batters of the seventh before Alexis Benton was hit by a pitch and Lexi Cole hit a bloop single.

Hipps stepped to the plate, and the Bobcats decided they weren’t going to let her beat them, putting her on with an intentional walk to set the stage for Singleton’s heroics. For her part, Hipps was hoping Singleton would get that opportunity as well.

“Thank God,” Hipps said about the free pass. “Because I was really nervous.”

Hipps certainly didn’t seem nervous, as the future PennWest Clarion Golden Eagle retired 14 of the final 15 batters she faced after yielding her lone run in the fourth.

“Emma was lights out like she has been the past few games,” said Clearfield coach Derek Danver. “Actually after that run scored she was locked in the rest of the game. She’s pitched a lot of great games, but you have to rank this one close to the top because it got us to the state title game.”

Hipps got two strikeouts to start the fourth before the lineup turned over to List, who was hitting .714 this postseason. Danver decided to intentionally walk List, with Tayor Young singling in the next at-bat and freshman Sami Springman bringing in List with a single of her own to make it 1-0.

It was a decision bore out of respect, Danver said afterward.

“She’s a great hitter,” Danver said of List. “When you respect somebody like that, they earn that and we decided that was what was best right there. We wanted to make one of their other players beat us, and their other players came up big. Had we lost the game 1-0 I’d probably be losing a little sleep.”

But they didn’t lose 1-0, due in large part to their ability to battle with two outs.

List, who came into the game with a 0.52 ERA and 275 strikeouts in 135 ⅓ innings. Facing the top of the Clearfield lineup in the sixth and nursing a 1-0 lead, List struck out Hipps and got Singleton to ground out

Lauren Ressler followed and came up with a double to left, which was followed by a line drive to left to tie the game. Both hits came on 1-0 counts.

“Everyone on this team is so competitive, and when we get to two outs, we’re just thinking we need to score now.”

It’s something Danver has seen time and again from his team this season.

“They’re gamers,” Danver said. “You get them in big situations like this, I don’t know what it is, if they lock in more, but they get focused and they get the job done, especially toward the end of the game when they knew they needed a run.”

“My fastball (was working really well) and I was able to mix in my change-up,” Hipps said.

With Benton setting the table in the bottom half of the inning, Danver went back to a conversation he had with her at the beginning of the season.

“She said at the beginning of the year jokingly that I’m going to break the career record for hit by pitches, and she’s gotta be close,” Danver said. “I tell them all the time, anything you can do to get on base. And Lexi Cole, she came up huge.”

Up next for the Lady Bison District 2 champion Tunkhannock (a 13-0, five-inning winner over Villa Joseph Marie in the other semifinal) in the state title game at Penn State’s Beard Field on Friday at 1:30 p.m.

It’s been a goal for this group of seniors from the very beginning to get to this point.

“A state championship has been our goal since this group was young,” Danver said. “To finally get here with an opportunity to win it is huge. We’re goin to enjoy it right now, but we’ve got one more.”

Balanced Offense, Strong Pitching Sends DCC to PIAA 1A Baseball Title Game for First Time Since 2001 Powered by North Washington Rodes
PIAA Moves Thursday Softball Games Up Half Hour; DCC to Play at 10:30 a.m.
This website or its third-party tools process personal data.In case of sale of your personal information, you may opt out by using the link Do not sell my personal information.
×
Manage consent