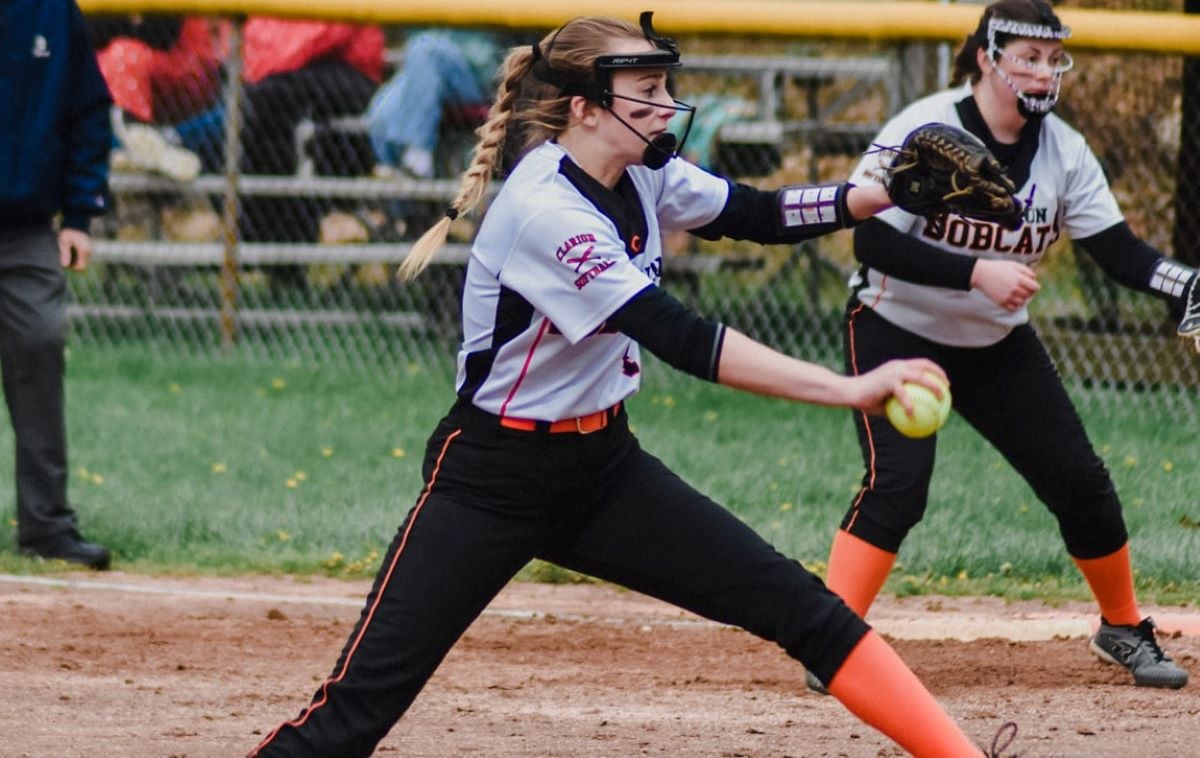 SHINGLEHOUSE, Pa. – It took fifth-seeded Clarion longer to get to fourth-seeded Oswayo Valley than it did for the Lady Cats to dispatch the Green Wave, 18-0, in four innings.

The trip to Shinglehouse was around two-and-a-half hours by bus, but the game lasted just one hour and 23 minutes.

“There are always concerns (about the trip),” winning pitcher Payton Simko said. “But we did perfectly fine.”

Simko was more than “perfectly fine”. The junior right-hander tossed a four-inning no-hitter walking three and striking out 10, including nine of the final 10 batters she faced.

Simko’s outing was a follow-up to a two-runs allowed performance against Moniteau in the regular-season finale last week. She said she has gained confidence, which is important.

“(Confidence) Is very important,” Simko said. “It carries you a long way. That’s what we need right now.”

The confidence might not have been there if it hadn’t been for an exceptional defensive play by second baseman Noel Anthony and catcher Jordan Best in the first inning.

After Simko had walked Brooke George to lead off the game for Oswayo Valley, Mackenzie George put down a bunt in front of the circle. Simko, in a rush to throw to first, threw the ball down the right-field line.

Anthony raced to ge the ball, and she turned and threw home with Brooke George trying to score all the way from first. In a bang-bang play at the plate, a nice sweep tag by Best recorded the out.

“It was really important,” Simko said of the play. “It saved us a run. It was a little confidence builder for us.”

Best then ended the innings when she picked Mackenzie George off third base following a stolen base and a walk issued by Simko.

Clarion’s bats seemed to feed off the defense with the Lady Cats striking for five runs in the top of the third.

But it was almost the inning that wasn’t.

After Oswayo Valley’s Macy West loaded the bases with two walks and a hit batter, she got Emily Troese to bounce back to her in the circle with the Green Wave taking the out at the plate. Makenzie Aaron then struck out leaving it up to Noel Anthony.

Anthony came through with a line drive over the head of shortstop Brabham to give Clarion a 2-0 lead.

Jordan Best them followed with a three-run home run to make it 5-0.

The Lady Cats used the long ball again in the third and fourth innings to keep adding on.

Kylee Beers went deep both times with her two-run shot in the third made it 7-0, and Clarion upped its lead to 9-0 by the end of the inning.

Then Beers went deep again in the fourth, with her two-run shot capping the scoring.

“I saw there was a big gap in left-center,” Beers said. “That is where I wanted to hit the ball. She threw the ball high, which is my sweet zone. So, I just cranked it over.”

Watch the postgame interview with Beers and Simko

Beers was 2-for-3 with a walk, three runs scored, and four RBIs, while Simko went 2-for-4 with a double and two runs scored. Ava Kiser scored three times and was 1-for-1 with three runs scored. She walked once and was hit by a pitch twice – both on balls that bounced and caught her.

Clarion will take on top-seeded DuBois Central Catholic in the semifinals at 4:30 p.m. Wednesday, May 26, at Brockway. The Lady Cardinals had a bye into the semifinals.

McDowell Wins D10 Class 6A Softball Championship
District 9 Sets Venues, Times for Softball Semifinals in Class 1A, 2A
This website or its third-party tools process personal data.In case of sale of your personal information, you may opt out by using the link Do not sell my personal information.
×
Manage consent