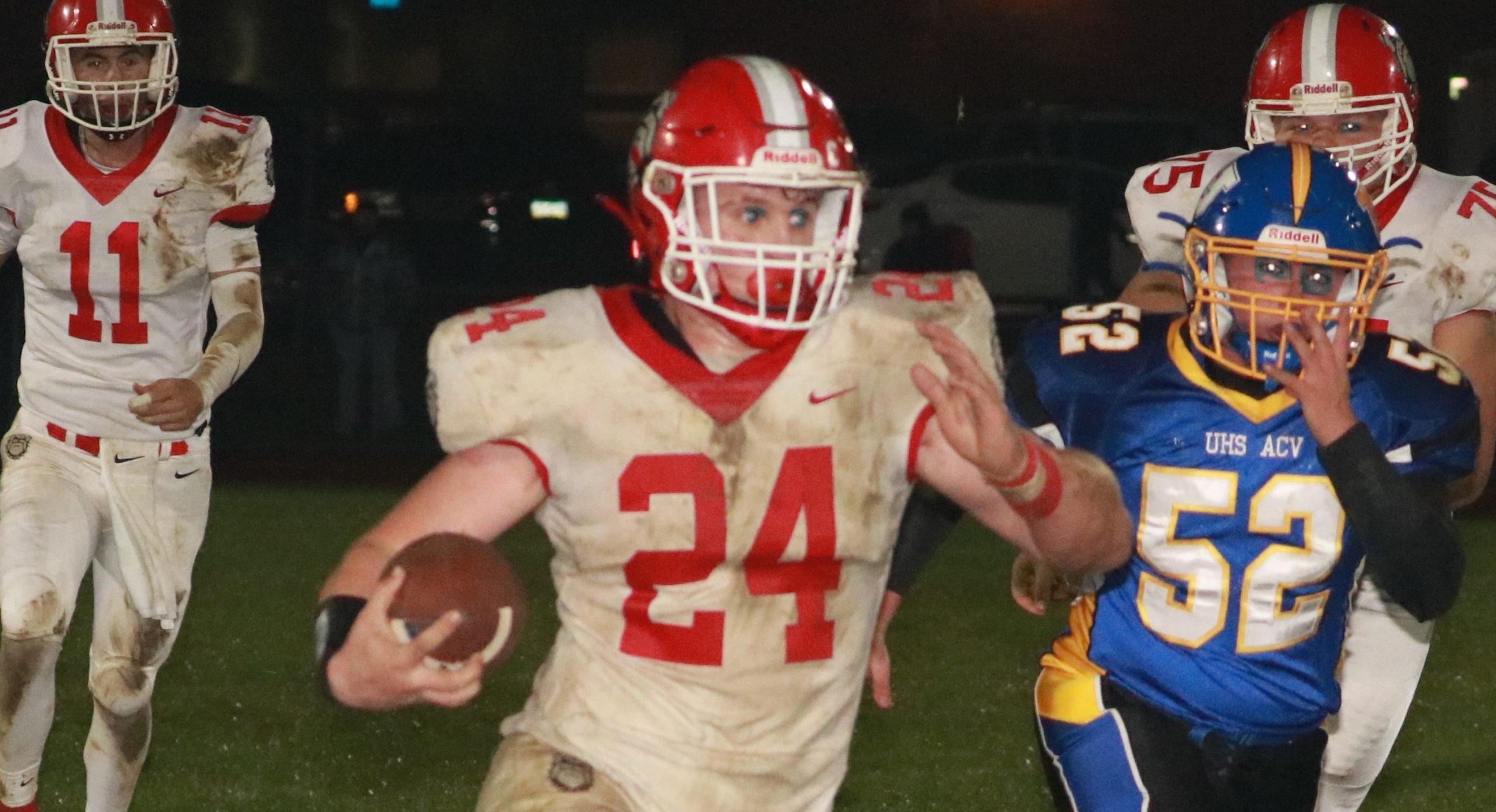 NEW BETHLEHEM, Pa. – Behind the running of Ray Shreckengost and the throwing of Bryson Bain, defending champion Redbank Valley rallied from an early 14-0 hole to advance to the District 9 Class 1A title game with a 35-14 win over visiting Port Allegany Friday night.

“We felt Port was a better than a five seed,” Redbank Valley head coach Blane Gold said. “We know if we give up 17 points or less, we are in a position to win football games. Down 14-0, we knew if we didn’t give up another point, we were still in the football game. Obviously, we didn’t want to start that way. But I am proud of the way they responded against a good offense.”

A pair of Drew Evens touchdown passes gave the fifth-seeded Gators (6-5) a 14-0 lead 38 seconds into the second quarter.

“One thing that was challenging is their quarterback had a nice season but he had nine yards passing in their last two games,” Gold said. “Our main focus was to stop the run game because it was so efficient last week. They came out slinging the ball. But we didn’t have any guys panicking or getting upset. That is a sign of a mature football team.”

Another sign of a mature football team is one that is able to adjust its offense to fit the time of year.

The Bulldogs weren’t really a running football team during the regular season averaging just a hair under 130 yards per game. But Friday night led by a career-high 205 yards and three touchdowns from Shreckengost, Redbank Valley ran for 219 yards.

Gold credited the success with bringing in one of his junior high coaches, Jason Huffman, to coach the offensive line two weeks ago.

“We brought Jason in after the Punxsutawney game,” Gold said. “It was always a collection of guys coaching the offensive line. We took a hard look at it and realized we weren’t getting the production we needed. SInce the junior high season was over, we asked if he wanted to join us. He has done a great job. We all believe in checking our egos at the door and doo what we need to do to get where we need to go. We were not getting what we needed from the offensive line and thought maybe a new voice would help. It certainly helped tonight.”

Shreckengost being as healthy as he has been this season didn’t hurt either.

The six-foot, 216-pound senior tore his hamstring during the preseason, missed the first game of the season with the injury, and didn’t play offense until Week Three against Elk County Catholic. Even then, it took him time to get up to speed, and he entered the game with 585 yards

“He is just now feeling healthy and feeling good,” Gold said. “Between that and Jason Huffman coming in to coach the offensive line, those two things are a great combination. You have to be able to run the ball and eat clock in the playoffs.”

Shreckengost, who was fed the ball 30 times, had a career-high in rushing yards while tying his career-best for rushing touchdowns.

Bain, meanwhile continued his efficient play going 15 of 24 passing for 181 yards, two touchdowns, and an interception, just the fifth pick he has thrown this year.

“Ever since the first game of the season when we made some backbreaking mistakes, Bryson had been very efficient,” Gold said. “He makes good decisions with the football. Even tonight, when you look at the drives where we had great success running the football, we had some third-and-intermediates and some third-and-longs and he made some big throws.”

Perhaps Bain’s biggest throw came with just under five minutes to play and the Bulldogs holding an eight-point, 22-14, lead.

Redbank Valley was facing fourth down at the Port Allegany 23-yard line when Bain connected with Tate Minich with a 23-yard touchdown pass that put the Bulldogs up 14, 28-14, with just 4:4 to play. Minich caught six passes for 88 yards.

His other touchdown pass, with 3:05 left in the first half, gave Redbank Valley a 15-14 halftime lead.

On that play, he tossed a 9-yard ball to Aiden Ortz.

His 7-yard scoring run with 6:51 left in the opening half got Redbank Valley on the board and coupled with a 2-point conversion pass from Gunner Mangiantini to Ashton Kahle had the Bulldogs in position to take the halftime lead.

Up one at the break, Redbank Valley expanded its lead to eight, 22-14, on a 3-yard Shreckengost touchdown run 3:48 into the second half.

Shreckengost then put the icing on the cake with a 17-yard scoring run with 2:44 left.

Port Allegany, which was looking for its second consecutive road upset in the playoffs after beating Keystone a week ago in Knox, had total control at the start thanks to a 31-yard Evens to Noah Archer touchdown pass 4:30 into the contest and a 6-yard Evens to Blaine Moses scoring pass 48 seconds into the second quarter.

“We play a 4-2-5, so we only have six guys inside the box most of the time,” Gold said. “But those six guys have been our rock. We have relied on them. We have the Bill Belichick approach. We want to take away the other team’s best play and best player. We challenge our guts to take away everything on the outside. And when you have Joe Mansfield you can do that. We wanted to take No. 16 (Moses) and No. 20 (Archer) out of the run game. We knew if they had to pass for 48 minutes, that would be an advantage for us.”

Without a ground game, the Gators were outgained 400 yards to 180.

Evens finished 15 of 23 passing for 194 yards, the two scores, and an interception with Archer catching six passes for 82 yards and a touchdown and Moses three for 23 yards and the score.

Redbank Valley will now face Union/A-C Valley in the championship game. The Bulldogs beat Union/A-C Valley 28-6 Oct. 22 in Rimersburg, part of the 10-game win streak that has come on the heels of a disappointing 22-20 upset loss to Keystone in Week One when expectations were through the roof for the defending champions.

“I vividly remember the Saturday after the Keystone game and my AD, Roddy Hartle, sending a text of support,” Gold said. “He said there were still high expectations. I agreed with him as long as I hadn’t lost my team. I was worried at the time if I could keep the kids bought in. But the leadership on this team is great. You can’t make kids buy in, but they bought in and have used that Keystone game as motivation. We break the huddle at the end of every practice with ‘Keystone on three’. We talk about it on a regular basis. So much of what happened in that game has really formed this team. All the credit goes to the players for not checking out. That loss has definitely been a driving force behind the season.”

RIMERSBURG, Pa. — Securing its first-ever berth in a District 9 championship game, Union/A-C Valley won its second straight home playoff game and earned a rematch with Redbank Valley with a 14-8 win over Smethport.

The second-seeded Falcon Knights (9-2), who had been knocked out of the playoffs in the first round by Smethport two of the last three seasons, scored once in each half to build a 14-0 lead before the third-seeded Hubbers scored early in the fourth quarter to make things interesting.

Smethport (8-3) cut it to 14-8 when Noah Lent hit Alex Ognen with a 35-yard pass followed by a two-point conversion toss to Brandon Higley on the first play of the fourth quarter.

But the Hubbers couldn’t complete the comeback, Lent getting intercepted near midfield by Dawson Camper with 1:07 remaining, allowing the Falcon Knights to kneel out the clock.

The Falcon Knights outgained the Hubbers, 250-188, as Card ran for 92 yards on 16 carries, and Camper finished with 77 yards on 14 attempts. Bailey Crissman was 3-for-7 passing for 63 yards, including a 54-yard completion to Ryan Cooper on the first scoring drive.

Union/ACV limited the Hubbers’ Lent, a 1,500-yard rusher going into the game, to 59 yards on 18 carries. He completed 6 of 16 passes for 82 yards with his TD pass to Ognen with three interceptions. He had thrown two going into the game.

Ryan Pelchy ran for 66 yards on five carries, one of the carries going for 57 yards in the first half. Ognen caught five passes for 74 yards.

Union/A-C Valley will get a rematch with Redbank Valley in the championship game. The Bulldogs beat the homestanding Falcon Knights, 28-6, Oct. 22 in Rimersburg.

Cathedral Prep Rolls Past Hollidaysburg in Class 5A Subregional
Reynolds Blanks Cochranton to Make it Back-to-Back D10 Class 1A Football Titles
This website or its third-party tools process personal data.In case of sale of your personal information, you may opt out by using the link Do not sell my personal information.
×
Manage consent