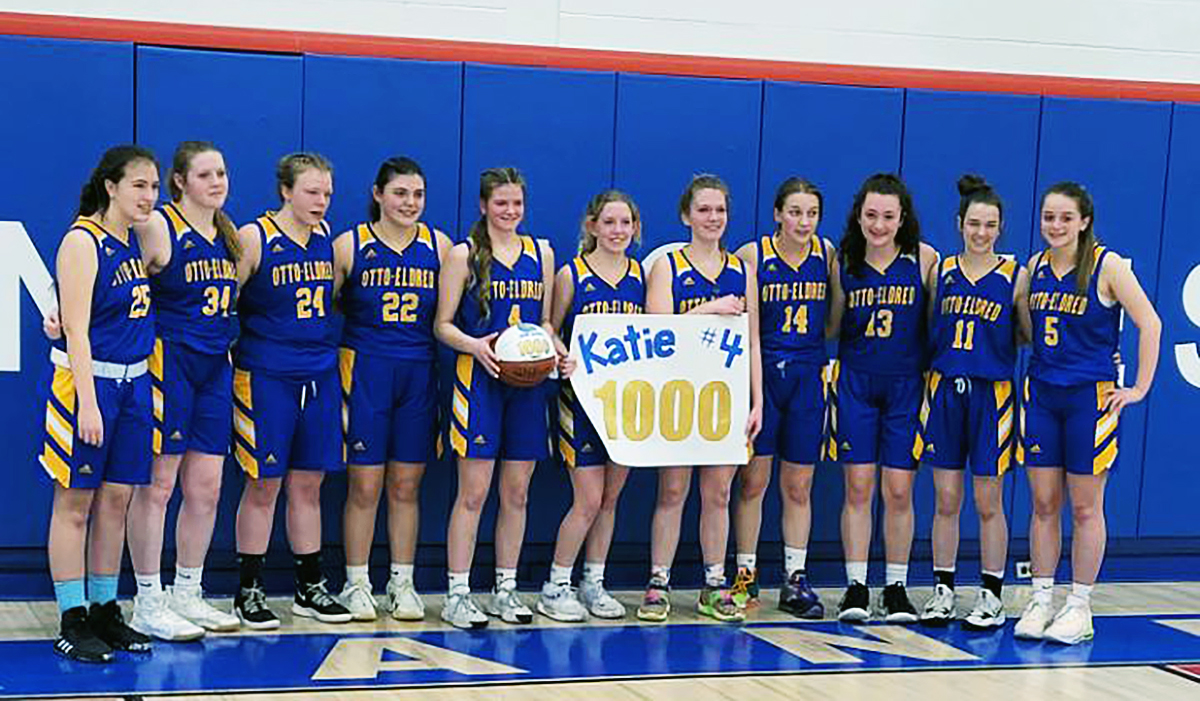 Katie Sheeler (4) celebrates reaching the 1,000 point milestone with her teammates following their 60-53 win over North Clarion in the District 9 Class 1A Semifinals, Tuesday, March 1, 2022. Photo by Brian Hobbs.

North Clarion pulled to within four, 54-50, with just under two minutes to play, but could get no closer.

“Our coach really does an amazing job preparing us for the game,” Sheeler, who also scored her 1,000th point in the fourth quarter, said. “He always boosts our confidence before the game so we know no matter what it is if things don’t go our way we’ll come out on top.”

Otto-Eldred’s (22-2) offense was firing on all cylinders to start the game. The Terrors opened with a 14-2 run and led 20-9 after the first eight minutes. Merry and Sheeler had 17 of the 20 points as they combined for five 3-pointers in the quarter.

“We always look at each other, when that first one goes in there are smiles on our face we know it’s going to be one of those nights, it’s so much fun,” Sheeler said.

North Clarion started playing more of its game in the second half. The She-Wolves used the size advantage of Lauren Lutz and Gwen Siegel to trim the lead to five early in the third quarter. Lutz and Siegel combined for eight points in the quarter, while Claire Kriebel knocked down a pair of 3-pointers in the frame to cut it to a 4-point game, 45-41 heading to the fourth.

The Terrors outshot the She-Wolves from behind the 3-point line 10-2.

Lutz led the She-Wolves with 14 points. Siegel added 12 and McFarland 10.

Sheeler had a game-high 27 points. Merry finished with 18 and Bri Heller six for the Terrors.

Otto-Eldred will take on Elk County Catholic for the District 9 Class 1A Championship Saturday at Clarion University’s Tippin Gym. Tipoff is scheduled for 2:30 p.m.

North Clarion will play Ridgway in the third-place game at a site and time to be announced.

With a steal and layup on the opening possession of the fourth quarter, Katie Sheeler reached the 1,000 point milestone for her career.

Sheeler came into the game needing 23 points to get to 1,000 for her career and exploded for 16 in the first half.

BROOKVILLE, Pa. – Lucy Klawuhn had a big first half and Elk County Catholic limited Ridgway to less than 25 percent shooting in a 37-16 semifinal win in the District 9 Class 1A girls’ playoffs.

The Lady Crusaders land in Saturday afternoon’s D9 final against Otto-Eldred looking for their first title since back-to-back crowns in 2009 and 2010. They haven’t played in a championship game since 2016. They’ll tip it off at Clarion University’s Tippin Gymnasium at 2:30 p.m.

Klawuhn scored nine of her game-high 14 points in the first half and was the game’s lone double-figure scorer while also pulling down seven rebounds.

Sami Straub and Sydney Alexander each scored eight points while Tori Newton had five points and 11 rebounds. ECC wasn’t much more accurate shooting at 12-for-36 from the field.

Ridgway meets North Clarion in the third-place game at a site and time to be determined.

Union and DuBois Central Catholic will meet for the fifth-and-final playoff spot awarded to District 9 Class 1A after the sixth-seeded Golden Damsels beat Clarion, 37-34, and fourth-seeded DCC knocked off eighth-seeded Northern Potter, 62-35.

DCC will most likely host the fifth-place game at a time and date to be announced.

FOXBURG, Pa. – Union trailed 24-23 going to the fourth quarter at A-C Valley High School but got five points each from Hailey Theuret and Kennedy Vogle to rally for the win.

Jordan Best scored a game-high 16 points for Clarion (10-12) in her final contest in a LAdy Cat uniform.

Lexi Berta hit four 3-pointers and scored a game-high 17 points for the Lady Cardinals with Faith Jacob recording a double-double of 10 points and 10 rebounds. Kayley Risser also had 10 points.

Rebecca Martin paced Northern Potter (17-8) with 11 points and eight rebounds with Haylee Chapman adding nine points, all in the second half.

Fulmer Becomes Franklin’s All-Time Leading Scorer as Knights Advance to D10 3A Title Game; Will Meet Seneca
Snelick’s Career-High 29 Points Leads St. Marys to Second Straight D9 4A Girls Title
This website or its third-party tools process personal data.In case of sale of your personal information, you may opt out by using the link Do not sell my personal information.
×
Manage consent