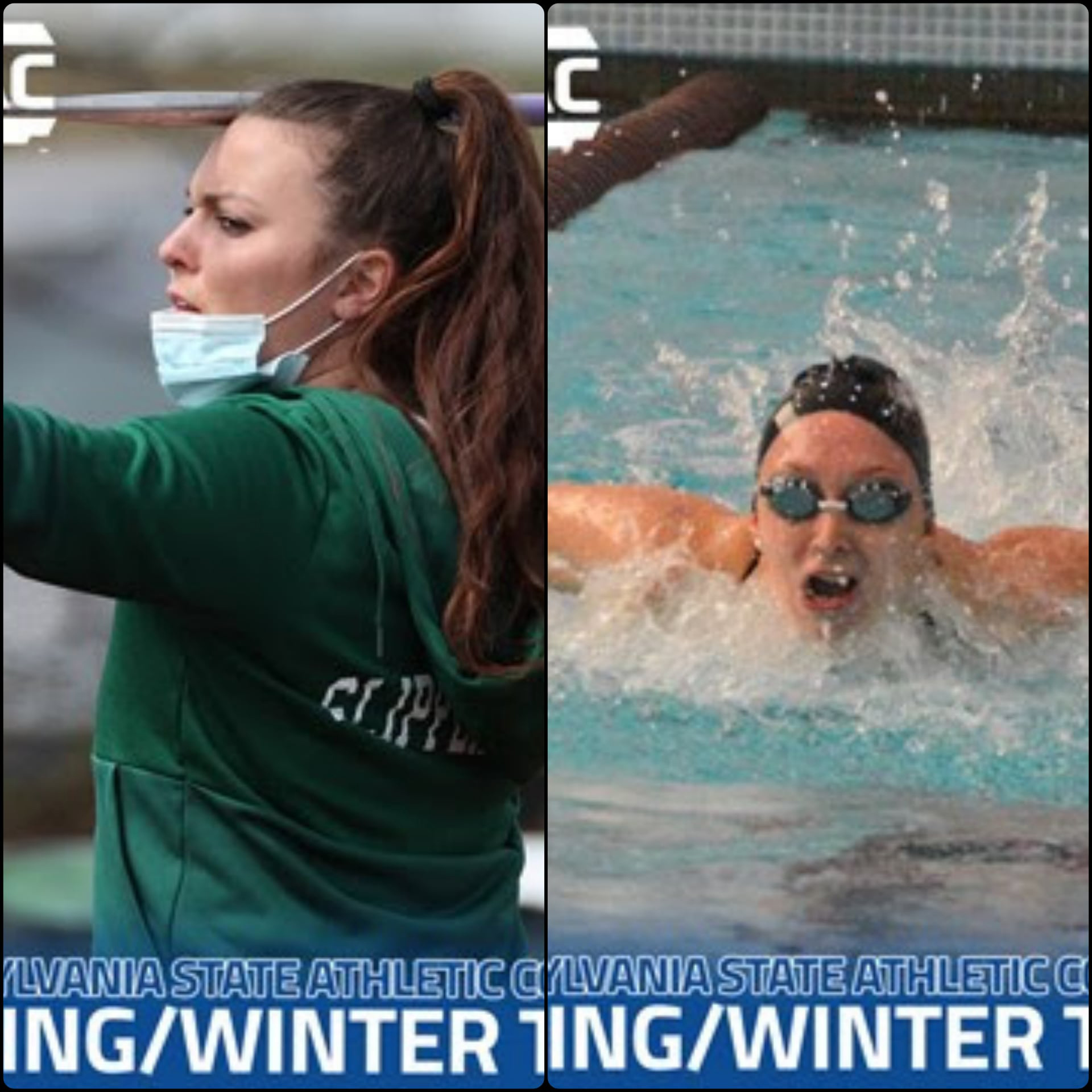 LOCK HAVEN, Pa. – Both District 9 and District 10 were represented when the PSAC announced its 2020-21 Winter/Spring Top 12 Thursday.

Sharpsville alum Danielle Collier (Slippery Rock) and Clearfield alum Paige Mikesell (Indiana) were among the 12 athletes chosen based on their academic and athletic excellence. Both athletes had 4.0 GPAs and won a national championship in their respective sports.

Collier, pursuing a Doctor of Physical Therapy degree, won the NCAA DII national title in the javelin by more than 17 feet with a throw of 53.18 meters (174’ 6”) at the national championships. She had the five farthest throws in the competition at the national meet and was never really challenged for the title. She shattered the SRU and all-time PSAC records in the javelin and broke the all-time PSAC record in the javelin by eight feet. Her mark of 53.18 meters is also the eighth-best throw ever recorded by a Division II woman and she qualified for and represented Slippery Rock as the only PSAC athlete to reach the U.S. Olympic Team Trials in track and field. She placed 18th at the U.S. Olympic Trials at the University of Oregon on June 25, competing as the only Division II female thrower to qualify in any event for the U.S. Olympic Trials. She won the 2021 PSAC title was First Team All American, First Team All-Region and was voted by PSAC coaches as the 2021 PSAC Female Field Athlete of the Year.

Mikesell, a Health and Physical Education major, was a National champion in the 200 freestyle (1:48.36) smashing an IUP Record. She was also an NCAA DII All-American in seven events and broke five IUP records at the NCAA Championships in March. She finished second in two events at NCAAs – 100 fly and 200 fly and her other All-American finishes were 12th in 100 free, eighth in 200 free relay, 10th in 400 free relay, 11th in 200 medley relay scoring 71 points. She led the team to 13th place finish – best for IUP since 2000. Mikesell was later named PSAC Women’s Swimming Athlete of the Year, PSAC Most Outstanding Women’s Swimmer at the conference championship meet for a second straight year and led IUP to its first conference title since 1999. She totaled 176 points and won all seven events she competed in at the PSAC meet, including 100 fly, 200 fly, 100 free, 200 IM, 400 medley relay, 400 free relay, and 800 free relay. She was named IUP Women’s Athlete of the Year and IUP Student-Athlete of the Month for March.

The Top 12 is nominated and voted on by PSAC sports information directors.

Typically, the accolade is announced at the end of each athletic season (Fall, Winter, Spring) as the PSAC Top 10. The PSAC Top 10 was initiated in the 1998-98 academic year, given to men and women who excel in both the classroom and in athletic competition.

This year, the league’s awards committee chose to recognize student-athletes who excel in the classroom and in athletic competition for both the winter and spring semesters.

With competition being halted in Fall 2020, and limited in the 2020-21 Winter season, the awards committee chose to call this year’s award the “PSAC Spring/Winter Top 12”, adding one honoree for both men and women and for the extra season.

Clearfield Baseball Team, Community Take Part in Attempt to Have World Record for Playing Catch
Franklin Grad YaSenka Named High-A Central Pitcher of the Week
We use cookies on our website to give you the most relevant experience by remembering your preferences and repeat visits. By clicking “Accept All”, you consent to the use of ALL the cookies. However, you may visit "Cookie Settings" to provide a controlled consent.
Cookie SettingsAccept All
Manage consent