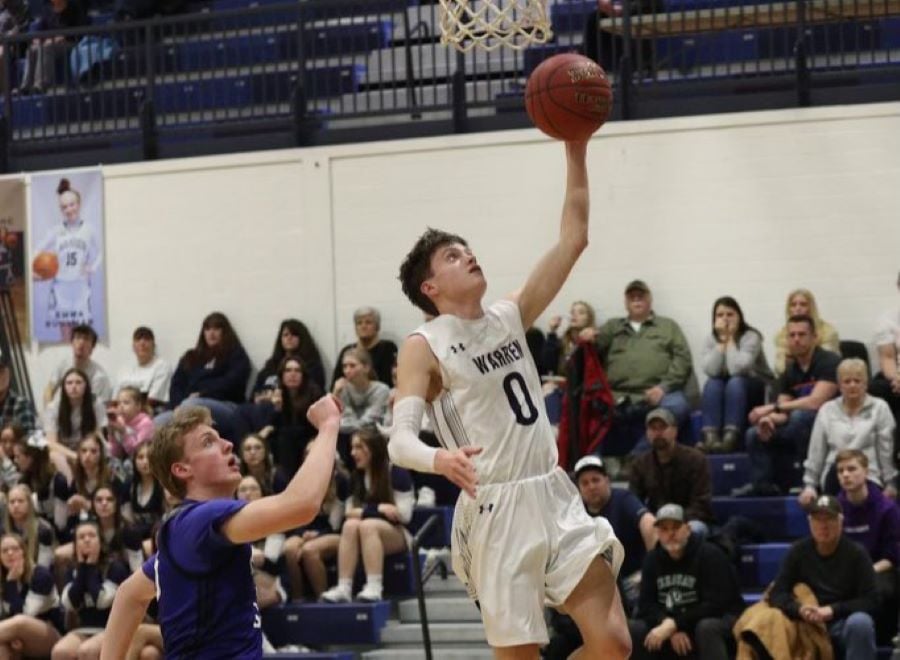 Santino Piccirilli had 14 points for Sharon, while Lamont Austin added 12.

Wood knocked down six 3’s in the win, while Damon Curry had 17 points, Aidan McCracken 10, and Cole Buckley nine for Franklin.

The Knights led 42-27 at halftime and scored 28 points in the third quarter en route to the win.

Isaiah Colon had 17 points and Manny Perez had 13 for Titusville.

Ordiway scored nine of his 20 points in the first quarter, while Berdine tallied 21 points.

Tommy Nyquist was also in double figures for Warren with 13 points.

Tristan Shelatz had 16 points for Conneaut, while Connor Perrye added 10.

HADLEY, Pa. – Lamont Samuels Jr. and Dontaye Bell led a balanced Farrell effort with 12 points each in an 85-33 win over Commodore Perry.

Amaree Pickens and Semontae Lofton had 13 points each for Prep.

JT DelSandro and Braylen Wilson had 12 points each for Harbor Creek, while Nick Krahe added 10.

Rylan Smith had a game-high 24 points for Corry

YOUNGSVILLE, Pa. – Cochranton outscored Youngsville 28-12 in the second half en route to a 61-34 victory.

Walker Carroll led Cochranton with 19 points, while Dominic Matt knocked down four 3’s on his way to 12 points and Brady Rynd added 11 points.

Schiffer Anderson and Quinn Ritchey had seven points each for Rocky Grove.

Lucas Luteran had 14 points for Meadville.

Rylan Dye had 11 points and Aidan Enoch 10 points for the Hornets.

Logan Lentz and Noah Philson had 15 points each for Hickory.

Daeymin Mattocks added nine points for Mercer in the win.

Connor Stover and Gio Rococi had 12 points each for the Big Reds.

Bahir Green had 17 points for GJR.

TRANSFER, Pa. – Liam Campbell had 17 points as Sharpsville earned a 50-34 win over Reynolds.

Luke Distler added 12 points for Sharpsville, while Braden Scravell chipped in with 11.

Jake Williams had 13 points and PJ Winkle 10 for Reynolds.

Fairview built a 35-8 halftime lead en route to the win.

Bre Heidt had 14 points for Fairview and Sara Gennuso 13.

Undefeated No More: Moniteau Hands State-Ranked N. Clarion First Loss; Sheeler, Caskey, Anderson Have Career Highs in Wins Jan. 20, 2023
Johnsonburg Boys Rally for OT Win Over St. Marys; ECC Pulls Away from Ridgway Late; Cville Gets ICC Win Jan. 20, 2023
This website or its third-party tools process personal data.In case of sale of your personal information, you may opt out by using the link Do not sell my personal information.
×
Manage consent