Shall Plays Hero in Smethport’s Overtime Win over Otto-Eldred 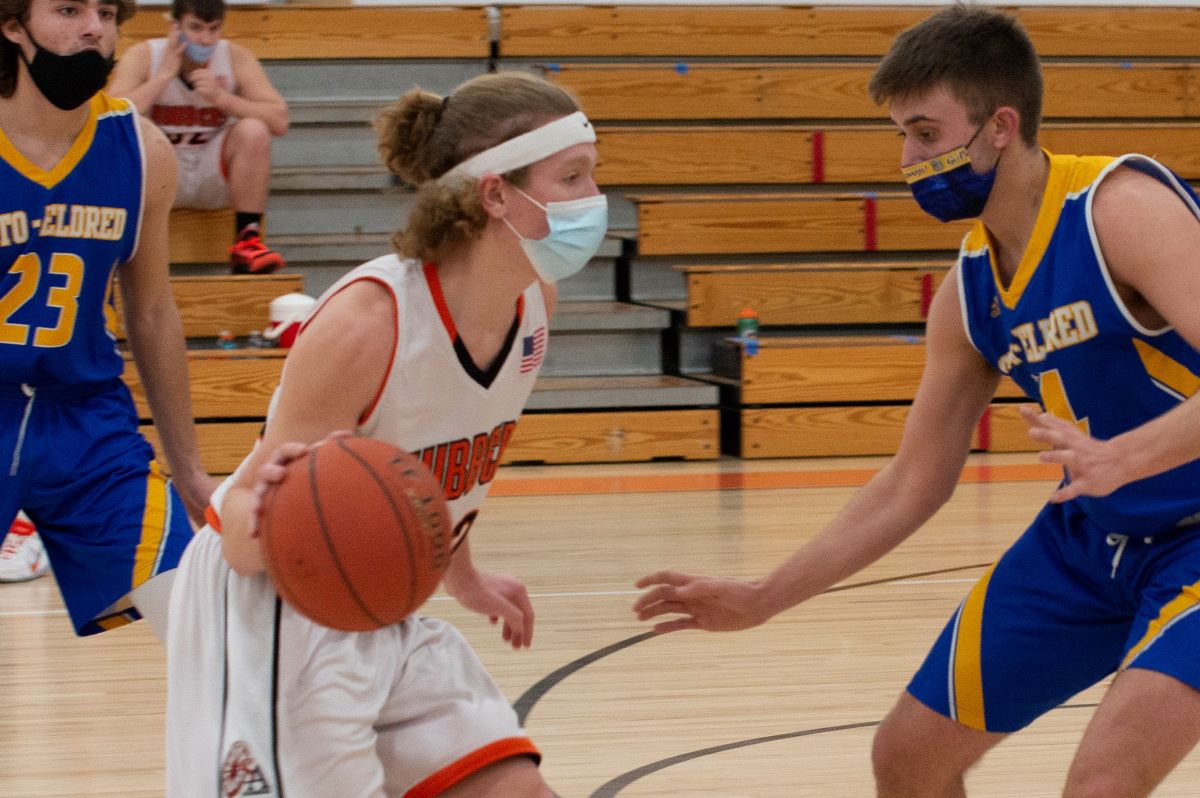 Layne Shall of Smethport is guarded by Otto-Eldred's Ryan Love during Tuesday's game. Shall was the hero for the Hubbers both in regulation and overtime. Photo by Barb Davis. See more of Davis' work here

SMETHPORT, Pa. – Layne Shall played the role of hero for Smethport in a 49-47 overtime win over visiting Otto-Eldred.

Shall first sent the game to overtime when he hit three free throws with 2.7 seconds left in regulation after getting fouled taking a 3-pointer.

Then in overtime Shall grabbed the rebound off a blocked shot by Richie McDowell and went coast-to-coast scoring a layup by going around an Otto-Eldred defender with 3.3 seconds to play to give the Hubbers the win.

Shall, who scored a game-high 25 points, including 12 in the fourth quarter and overtime, joined D9and10Sports.com’s Chris Rossetti via Zoom after the game to discuss his performance.

Smethport trailed 39-38 with 47.2 seconds left in regulation when McDowell missed a pair of free throws.

Jake Merry then hti two charity shots for Otto-Eldred with 31 seconds left to give the Terrors a three-point, 41-38, lead.

Alex Ognen for Smethport missed a potential game-tying 3-pointer with just over 12 seconds left but was able to grab a loose ball rebound with 6.6 seconds to play in regulation with the Hubbers calling timeout.

Following the timeout, Shall used a dribble to get open from just to the left of the top of the circle and was fouled by Austin Cousins.

He hit the first free throw then had the second one rattle home before a timeout was called. After the break, he found nothing but net to tie the game.

In overtime, Otto-Eldred took a 47-45 lead on a basket by Zaz Bell with 1:25 to play, but a turnaround shot by McDowell, his only basket of the game, tied the game at 47 with just over a minute left.

The Terrors wanted to hold for the last shot and called timeout with 16.3 seconds left.

Following the timeout, Merry made a move to the basket only to have McDowell block the shot right into the hands of Shall who took it the length of the court himself for the win.

Ognen added 10 points for Smethport, which led 32-28 going to the fourth quarter.

Merry paced Otto-Eldred with 16 points, including hit a pair of key 3-pointers in the fourth-quarter comeback, a quarter that saw him score eight points. Gavin Jimerson added 15 points for the Terrors, and Braden Maholic had 10.

Watch the game via Smethport’s Vimeo Video. Key points can be found at the following times:

Jan. 26, 2021 D9 Hoops: KC, CC Boys Hold on For Wins, Callen Has Triple-Double for C-L Boys; Lary Leads Bradford Girls
District 9 and District 10 Basketball and Wrestling Schedule for Jan. 27, 2021
We use cookies on our website to give you the most relevant experience by remembering your preferences and repeat visits. By clicking “Accept All”, you consent to the use of ALL the cookies. However, you may visit "Cookie Settings" to provide a controlled consent.
Cookie SettingsAccept All
Manage consent