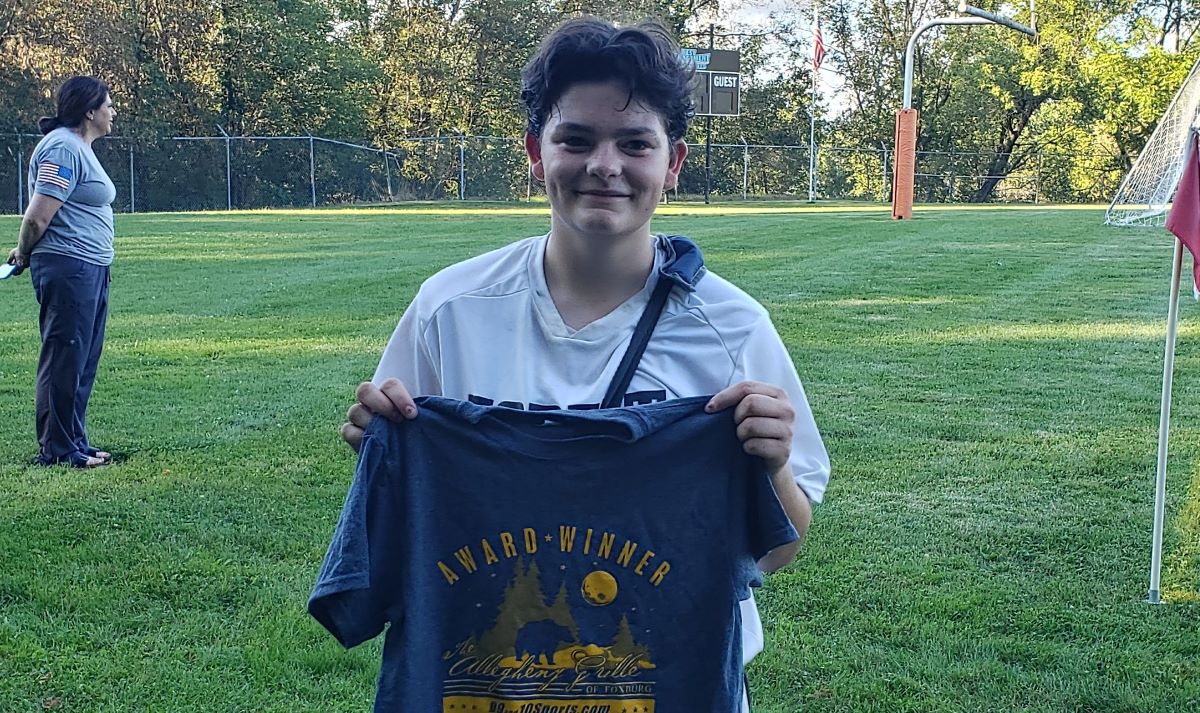 CLARION, Pa. – Forest Area grabbed a 3-0 lead less than two minutes into the second half then held off a late rally by Clarion to get a 3-2 win over the Lady Cats at Clarion.

Shawna Pack then added a goal 1:55 into the second half to put Forest Area up 3-0.

The score remained that way until there were just under 20 minutes to play when Lexi Coull, who had a number of good chances in the first half, beat Forest Area keeper Emma McFarland to get Clarion back in the game down 3-1.

It became a game about nine minutes late when Anna Gribik scored off a corner shot with 11:18 to play. Gribik’s corner was high and went off McFarland’s hands before going into the net.

Best, who also had an assist in the contest, had a chance to put the game away with about five minutes to play but missed just wide on a breakaway, but Clarion wasn’t able to get the equalizer.

Pack, who was all over the field, was named the Allegheny Grille of Foxburg Player of the Game.

McFarland made 22 saves, including a diving stop along the goal line in the first half, to help Forest Area get the win.

Olivia Schott had the other goal for Port.

Jaylee Grills made three stops in net for Clearfield.

BROCKWAY, Pa. – Amanda Decker had the only goal of the game in a 1-0 Brockway victory over Brookville.

Josie Orinko had the shutout in net.

Reagan Beamer scored a pair of goals for Redbank Valley, while Ember Hetrick added the other Bulldogs tally. Alexandra Shoemaker added an assist.

BUFFALO – Jenna Devore, Gabby Ellsworth and Abby Falhaber all scored to lead McDowell to a 3-0 win over the Nichols School.

Olivia Whatamore got the shutout in net.

HARBORCREEK, Pa. – Leya Bretz scored both of Harbor Creek’s goals in a 2-1 victory over Warren.

Aubrey Smith had the lone tally for the Dragons.

NEW WILMINGTON, Pa. – Lindsey Martineau and Analise Hendrickson both scored to help Wilmington to a 3-0 victory over Hickory.

Taylor Kendall had the clean sheet in net.
BROCKWAY 9, BROOKVILLE 0

Park and Maze combined for the shutout in net.

The Wolves got their other tally via an own goal. Josh Greville Jon Mishic, Aaron Mishic and Illerbrun tallied assists for the Wolves.

Cody Whitling, Thomas Uckert, Wyatt Boyden, Nate Megnin and Brock Smith also found the back of the net for the Lions. Whittling added an assist, as did Jameson McIlwain and Carter Brown.

Ethan Baker and Tyler Chermak combined for the clean sheet in net.

Lathan Price had two assists and Smith another for the Gremlins.

ULYSSES, Pa. – Nash Delp and Micah Baston scored two goals each to send Coudersport to a 6-0 win over Northern Potter.

Mason Roessner and Connor Vanwagonen had the other goals for the Falcons.

Trent Thompson made 22 stops for NoPo and Christian Furman two for Coudy.

Sam Kightlinger, Cas Espeso, Nick Thiemann, Carter Frants, Wade Atkins and Hayden Daubenspeck had one each for the Bison.

Nathan Troyer and Aidan Suroviec combined on the shutout in net.

Mitchell Hamm and Espoir Mayele also scored for the Royals, while Hamm and Paul Katende added two assists each.

Jacob Irani had two goals and Jimmy Irani and Colson Frank added one each.

Ethan Best tallied the fifth goal. JT Blum had a pair of assists and Jack Darling added another helper in the win.

ERIE, Pa. – Luke Stanyard’s goal off an assist from Sam Parente in the second half lifted Harbor Creek to a 2-1 win over Mercyhurst Prep.

Stanyard had both goals for the Huskies, with Brandon Konieczki.

HERMITAGE, Pa. – Michael Orendi and Logan Gordon scored two goals each to help lead Hickory to an 8-0 win over Sharpsville.

Sept. 9, 2021 VB: Radtke Leads McDowell to Win; Meadville Sweeps Maplewood; DCC, Bradford, Rocky Grove Win in Five
D9and10Sports.com to Broadcast Franklin at Eisenhower Football Friday
This website or its third-party tools process personal data.In case of sale of your personal information, you may opt out by using the link Do not sell my personal information.
×
Manage consent