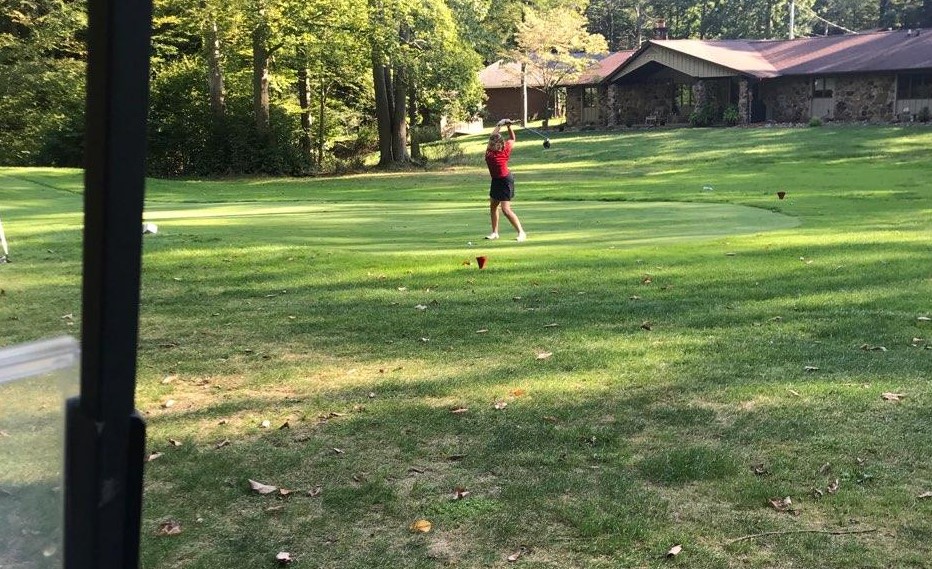 Lizzie Sikora Punxsutawney tees off at the fourth ole at Treasurer Lake Gold in DuBois Tuesday. Sikora birded the Par 4 and finished second on the day

Izzy Geist-Salone added a 52 for DuBOis with Maddie Gray shooting a 55.

Lizzie Sikora paced Punxsutawney with a 47 followed by Megan Hanley with a 54.

Brockway took third with a 237 led by a 49 from Miranda Mancini.

Freshman Sasha Petrochko was second with a 75 and Leah Benson as third with an 85.

The Hornets had a team score of 232 well ahead of second-place Reynolds, which shot a 297 and third-place Conneaut (307).

Alaina Harpst led Reynolds shooting an 89, while Allison Simonetta and Maggie Battles each shot 100 for Conneaut.

Hickory leads the team standings after three matches with 18 points followed by Reynolds with 15 points.

CLARION AND MONITEAU TIE FOR FIRST AT KSAC MEGA MATCH

Moniteau’s Jacob Felsing tied Clarion-Limestone’s Hayden Siegel for first place on the day with both golfers shooting a 37. Clarion’s top golfer was Devon Lauer, who was fourth with a 43. Venango Catholic’s Colin Lierbach was third shooting a 40, while C-L’s Hayden Callen tied Lauer for fourth with a 43 of his own.

After three matches, Clarion leads the KSAC with 26 ½ points followed by Moniteau at 24 ½ points and C-L at 21 points. Forest Area is fourth with 17 points.

Osbourne shot a low score of 78 on the day beating Grove City’s Sam Norris by a stroke and helping the Hornets top the host Eagles by eight total strokes – 332-340. Slippery Rock was third shooting a 347.

Colbert and Evans finished fourth and fifth individually on the day with Colbert firing and 81 and Colbert an 82. Slippery Rock’s Logan Wolak had the third-best score of the day shooting and 80, while his teammate, Jack Hadley, tied Colbert for fifth with an 82.

After three matches, Hickory leads the Region by one point, 20-19, over Grove City with Slippery Rock in third place with 15 points.

The Sailors topped second-place Mercer by 10 strokes, 377-387, with Greenville taking third with a score of 421.

After a pair of matches, Lakeview is in first place in the Region with 12 points followed by Mercer with 10 and Greenville with eight.

BROCKPORT, Pa. – Jackson Craft shot a 39 to lead Punxsutawney past Brockway, 196-222 Tuesday at the Brockway Golf Course in Brockport.

Craft had the day’s best score by 11 shots over teammate John Crago and Brockway’s Dylen Coder, who both shot a 50.

BROOKVILLE, Pa. – Gavin Kaschalk’s 41 was the best score on the day, as visiting DuBois beat Brookville, 175-186, at Pinecrest Country Club.

Kaschalk was one of three Beavers to shoot under 45 with Cody Jaconski and Tyson Kennis both firing 43.

Hayden Osborne and Bryce Rafferty tied for the best score for Brookville with both shooting a 45.

Sept. 8, 2020 Girls’ Tennis Recaps: DuBois Rallies Past Punxsy; Hickory, Greenville Get Sweeps
D9and10Sports to Broadcast Four Events Thursday through Saturday
This website or its third-party tools process personal data.In case of sale of your personal information, you may opt out by using the link Do not sell my personal information.
×
Manage consent