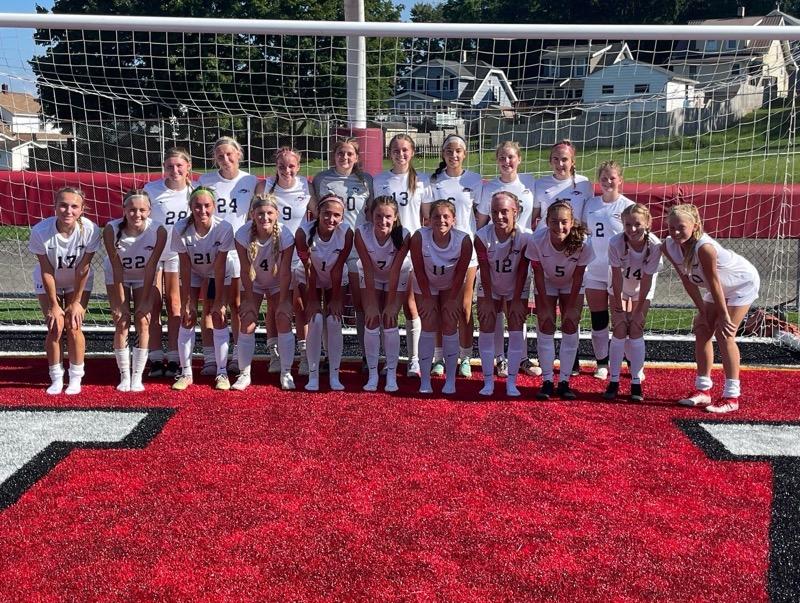 Anthony Martucci and Kenny Zacks had assists for the now 4-0 Lakers.

Will Vanderweele had North East’s goal in the second half.

SLIPPERY ROCK, Pa. – Slippery Rock scored three unanswered goals in the second half to earn a 5-2 non-region win over Mercer.

Nick Kingerski recorded a hat trick for the Rockets, while Hunter Berry had two goals.

Cole Kovacik had two assists and Gavin Siegried and Berry one helper each.

Cole Cunningham had both of Mercer’s goals, while Max Ellis and Garrett Thum had the assists.

JR Schepp had 10 stops in net for Mercer.

Verdill had two assists, Uckert one goal, Brenden Bettwy a pair of goals, Danny Schweitzer one goal and three assists and Reece Geiger, Brady Pierce, Jason Megnin, and Layton Dunn one goal each.

Clouse added two assists, while Harmon and Ty Carrier chipped in with one helper each.

Aidan Emerick had a goal and an assist for the Gators, while Alex Schott had an assist.

Ty Daniels found the back of the net for NoPo.

Noah Nandzel had the other goal for the Ramblers.

Ethan Baker and Tyler Chermack combined on the shutout in net.

Isaiah Schoonover, Logan Smith, Keaton Fiddler, and Luke Wetzel also found the back of the net for the Jackets.

LAWERENCE PARK, Pa. – Liam Pikiewicz and Lee Hoover both scored to help Seneca to a 2-0 win over Iroquois.

Evan Moffett got the shutout in net.

HERMITAGE, Pa. – Wilmington’s Joe Saterlee and Hickory’s Lukas Jones scored two goals each as the Greyhounds and Hornets battled to a 2-2 draw.

Chance Miller and Ryder Tervo had assists for the Hounds.

FAIRVIEW, Pa. – Zach Scott scored the lone goal of the game in the second half to lift Fairview to a 1-0 win over Harbor Creek.

Jackson Chiocco had the assist for the Tigers, while Luke Irvin earned the shutout in net.

FRANKLIN, Pa. – Jack Chapman and Finn Ordiway scored for Warren, but it wasn’t enough as Franklin earned a 4-2 win.

Parks Ordiway had an assist for the Dragons.

EDINBORO, Pa.- Carter Sindlinger and David Price scored goals in the first half to send General McLane to a 2-1 win over Greenville.

Gio Masone had an assist for the now 4-0 Lancers.

Rasce Stefanowicz scored in the second half for Greenville.

Chesney Boggess and Emily Walsh combined for the shutout in net.

Alyna Winters and McKenna Lanager also scored for Clearfield, which led 5-0 at halftime.

Winters had two assists, while Ryen, Smith, and Kaylie Brown had one helper each.

Brielle Budd had 10 stops in net for Port and Annie Gehman six stops for Wellsboro.

Maddy Bailey and Ella Vernam had Mercer’s other goals.

Hannah Plunkard had two of Slippery Rock’s goals, while Emily Plyler had the other.

MEADVILLE, Pa. – Annalle Gardner and Analiese Hendrickson both scored to help Wilmington to a 2-1 win over Meadville.

Genevieve Glavach and Sarah Thomas had assists for Wilmington.

Kendyll Lewis had the other goal for the Lady Eagles.