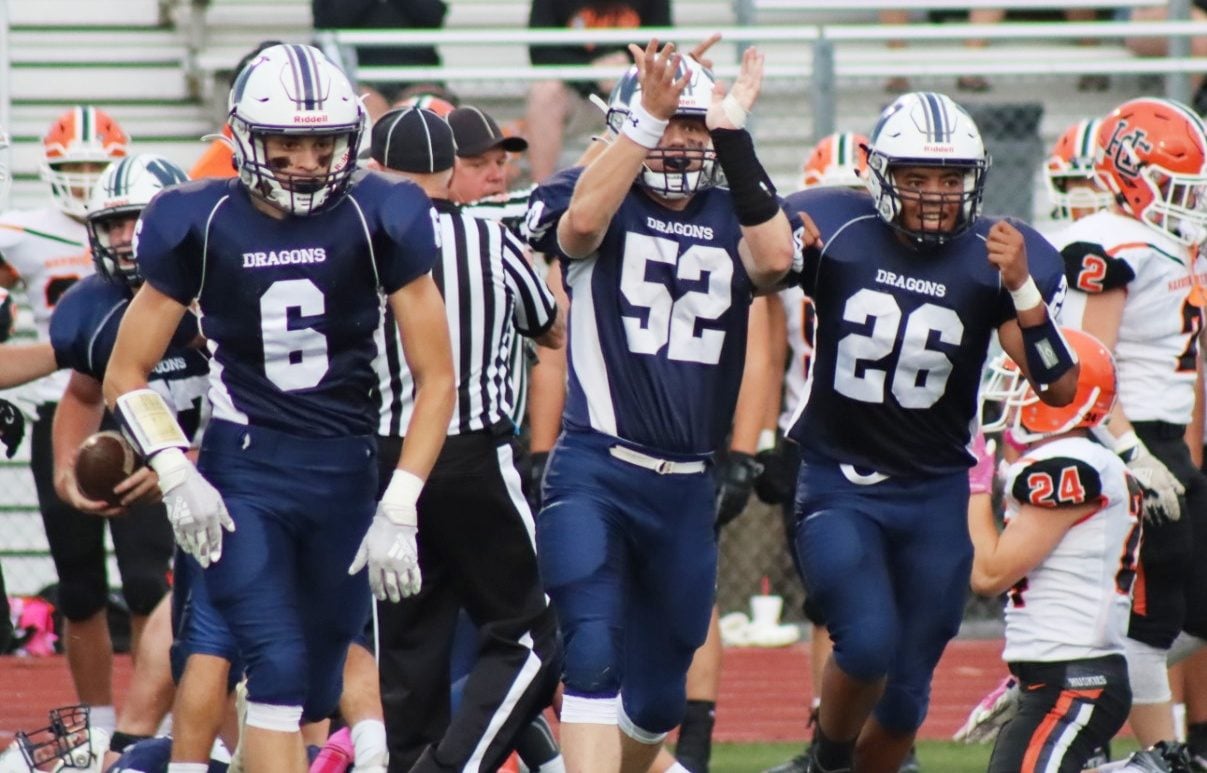 Sophomore quarterback Eric Dippold threw for three first-half touchdowns and Tommy Nyquist had 117 yards on the ground, including the game-clinching 35-yard score with 1:35 to go in the fourth quarter.

The Dragons (2-0) never trailed in the game, getting the scoring going right away as Dippold connected with Ben White on a 21-yard touchdown pass just over a minute into the game. It was the third time in two games the duo have hooked up on scoring plays. It came on the heels of a successful fake punt attempt that saw Carter Pascuzzi connect with Ethan Senz for 23 yards.

Cam Williamson had 121 yards on the ground for the Huskies, but the Dragons won the battle of total yards, 389-194.

A big part of that was the Dragon front seven, led by Alan McAllister and Easton Hultberg. McAllister earned Allegheny Grille of Foxburg Player of the Game honors and talked about the win afterward along with White:

Dippold continued his hot start through the air, connecting with Cayden Wright on a 23-yard touchdown, with Wright making a one-handed snag at the 10:06 mark of the second quarter to make it 12-0.

Each team scored in the final 2:05, as Gavin Ennis stepped in front of Dippold’s pass on third down and scampered in from 10 yards out to get the Huskies on the board.

Dippold shook off the mistake, completing a pair of long passes, the second of which went to a wide-open Nyquist from 22 yards out to give Warren an 18-7 lead at halftime.

The Huskies (1-1) turned to the ground game on their opening drive of the third quarter, as Williamson did much of the heavy lifting, ultimately punching it in from 12 yards out to cut the margin to 18-14.

Harbor Creek got the ball back with a chance to take the lead late in the third quarter, went three-and-out and a bad snap on the punt attempt resulted in a safety that put Warren ahead 20-14.

Warren’s defense stood tall in the fourth quarter, and Nyquist eventually salted the game away, with his late touchdown run.

Charlton was 5-of-9 passing for 39 yards for the Huskies.

SHARPSVILLE, Pa. – William Mokel threw for 206 yards and three touchdowns as Slippery Rock improved to 2-0 with a 35-10 win over Sharpsville.

Shane Thompson was on the receiving end of two of those scores and also added another touchdown on the ground for the Rockets.

It was the Thompson to Mokel connection that accounted for the first score of the game on a 53-yard touchdown at the 1:41 mark of the first quarter.

The Rockets scored twice in the second quarter courtesy of a Thompson 4-yard run and a Mokel 7-yard scoring strike to John Sabo. In between, Sharpsville got on the board via a Liam Campbell 37-yard field goal.

After a scoreless third quarter, Thompson and Mokel made it 28-3 early in the fourth on a 29-yard touchdown, and Ryan Montgomery put the finishing touches on the Rockets’ win with a 14-yard scoring run.

Thompson finished with 113 yards receiving for the Rockets. Summer threw for 63 yards for the Blue Devils.

WATERFORD, Pa. – Justin Leuschen ran for 86 yards and a touchdown and Fort LeBoeuf battled to a 17-14 victory over Grove City in a re-match of last season’s D10 Class 3A semifinal game.

Leuschen scored on a 2-yard touchdown run in the first quarter to give the Bison a 7-0 lead, and an Isaac McGuire 36-yard field goal made it 10-0 in the second quarter.

Grove City scored with less than a minute to go in the first half on a Zach Rodgers 1-yard plunge to make it 10-7.

Adam Lichtinger hauled in a 52-yard touchdown pass from Isaac McGuire in the third quarter to make it 17-7.

Grove City struck late on an Anthony Pereira 62-yard scoring reception from Hunter Hohman, but the Bison were able to hold off the Eagles in the final moments.

Hohman threw for 244 yards, while Gavin Lutz had 75 yards receiving to lead GC.

CURWENSVILLE, Pa. – Visiting Mount Union erased an eight-point deficit late in the first half by scoring 33 straight points on its way to a 54-36 shootout win over Curwensville.

Dayvon Wilson, who ran for three touchdowns while throwing for a fourth score, for the Trojans within two, 29-27, with just under three minutes left in the opening half on a 3-yard run.

Je’Saun Robinson then snagged a McGarry pass and returned the interception 61 yards for a score to put Mount Union ahead for good, 35-29, with only a minute left before the break.

It was Robinson’s second touchdown of the game, as he had scored on a 13-yard run 1:02 into the second quarter to put Mount Union ahead, 21-7.

But Thad Butler caught a 49-yard touchdown pass from McGarry 19 seconds late to get the Golden Tide within six, 21-15, and then Terry hauled in a 17-yard strike from McGarry at the 7:25 mark to put Curwensville ahead, 22-21.

It was Butler’s second touchdown of the game, as he got Curwensville on the board late in the first quarter with an 83-yard kickoff return to cut Mount Union’s lead in half to 14-7.

The Trojans took the 14-0 lead on a 55-yard Wilson to Cainen Atherson touchdown pass and an 11-yard Wilson run.

Up six at halftime, Mount Union scored the first 19 points of the second half to put the contest away.

Terry hauled in his third touchdown catch from McGarry, this one from 47 yards away, with just over three minutes left to close out the scoring.

Wilson finished with over 200 yards rushing for Mount Union, while Terry had over 250 yards receiving for Curwensville.

District 9 and District 10 Football Live Scoreboard – Week 2 2021 (Sept. 2-4)
Smethport’s Lent Named Week Two 2021 District 9 Jim Kelly POW Powered by the Allegheny Grille
We use cookies on our website to give you the most relevant experience by remembering your preferences and repeat visits. By clicking “Accept All”, you consent to the use of ALL the cookies. However, you may visit "Cookie Settings" to provide a controlled consent.
Cookie SettingsAccept All
Manage consent