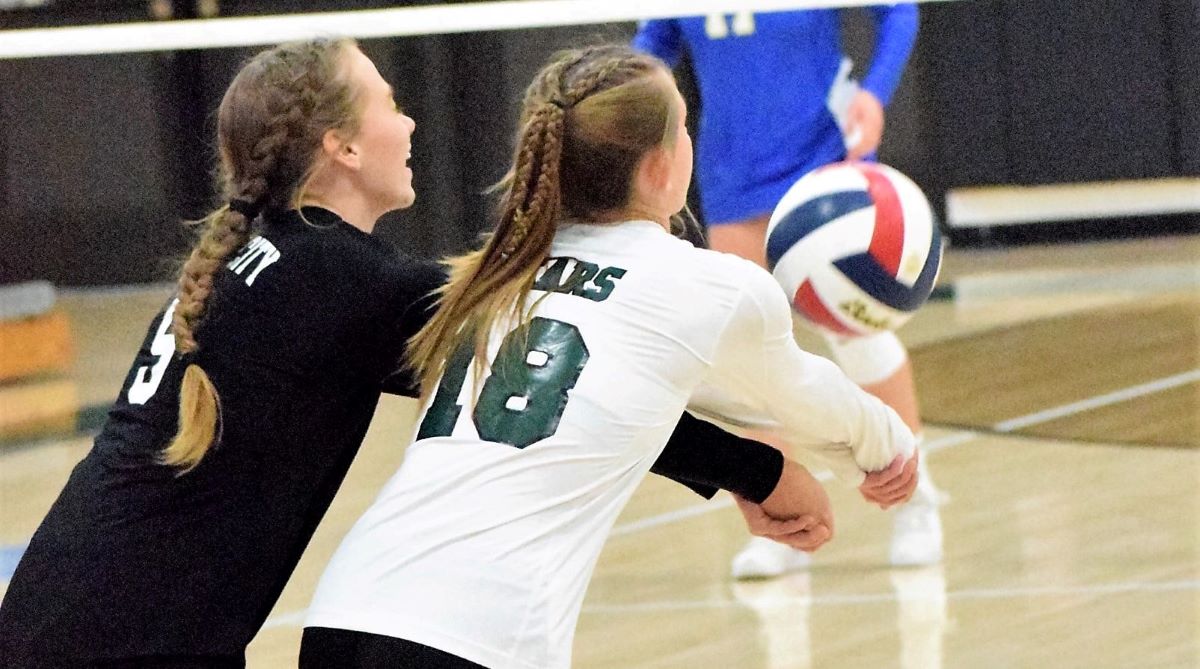 Abby Tingley (No. 18 in white) records one of her 35 digs Thursday for Union City in a win over Seneca. Photo by Jeff Parkin

Lucy Higley added five kills and eight digs for the Bears with Abby Tingley getting to 35 balls on defense and Emma Hopson adding 14 digs.

Kaylee Mattera was the recipient of most of those set assists recording 22 kills while completing a double-double with 13 digs.

Katie Madigan had a monster match in the loss for Warren recording 30 kills, 27 digs, and three aces.

Summer Lucks helped on defense for Warren with 19 digs, while Halee Mineweaser ran the offense with 37 set assists and also added seven kills.

Smith added a block with Berchtold chipping in four digs and an ace.

Kessler and Smith each had 10 kills in the victory, while Kendall Dunn ran the Lady Lions offense with 24 set assists.

Leah Exley paced Keystone with 12 kills while Sydney Bell had a strong all-around game with nine kills and three blocks.

Alyssa Weaver ran the offense for the Lady Panthers with 13 set assists.

Burns recorded 12 kills in the second set alone and was named the Allegheny Grille of Foxburg Player of the Game. She and birthday girl Adia Needham, who had two kills and an ace, talked about the win.

Jessica Dunn served well for the Lady Gremlins with three aces, including back-to-back aces in the second set, while Rosie Carden had three kills, four digs, and seven set assists.

Rayna Hultman served well for the Knights with seven aces with Caroline Smith adding three aces. Kaylee Morrison also chipped in a pair of kills in the victory.

Kadence Steffan ran the offense for the Lady Wolverines with 31 set assists while adding 14 digs.

Gabby LaJeunesse had 37 digs in the win for the Knights while Kyla Hart served for 14 points.

Sperry also had 10 digs with Ollinger chipping in 12 digs.

Julia Seth ran the offense with 35 set assists while adding nine digs and five aces, and Jayne Seth had 12 digs.

Anna Merry ran the offense for the Lady Terrors with 14 set assists and also had four digs, two aces, and a kill.

Emma Parks added 13 kills and five digs for the Bulldogs who also got 23 digs from Meghan Willis, 11 digs and five kills from Kendall Sandrock, and 10 digs from Kai Kawata.

Elliott Schleicher ran the offense for Meadville with 37 set assists and added 14 digs.

Adalyn Duncan, Paige Griffith, and Raeley Gargano each added five kills for the Hornets, while Emily Duncan ran the offense with 16 set assists.

Jillian Ochs had six digs for the Oilers, and Emma Stahl ran the offense with nine set assists.

Moira Stanisch ran the offense for ECC with 21 set assists.

Sauley needed one dig for 500 in her career and recorded 10 in the match while adding nine set assists, two kills, and two aces.

Macensky needed 10 kills to reach 500 in her career and reached the mark in the third set while finishing the match with 12 kills, four digs, and four aces.

Aidanne McLaughlin added seven kills and 19 digs for the Panthers, while Kam Fuller ran the offense with 24 set assists.

Alyssa Bakaysa led the way for Curwensville with seven kills, two blocks, and an ace, while Taylor Luzier had six digs.

Alaina Anderson ran the offense for the Lady Tide with nine set assists.

Lexi Brown ran the offense for the Spartans with 14 set assists, and Devyn Zappitelli had eight aces.