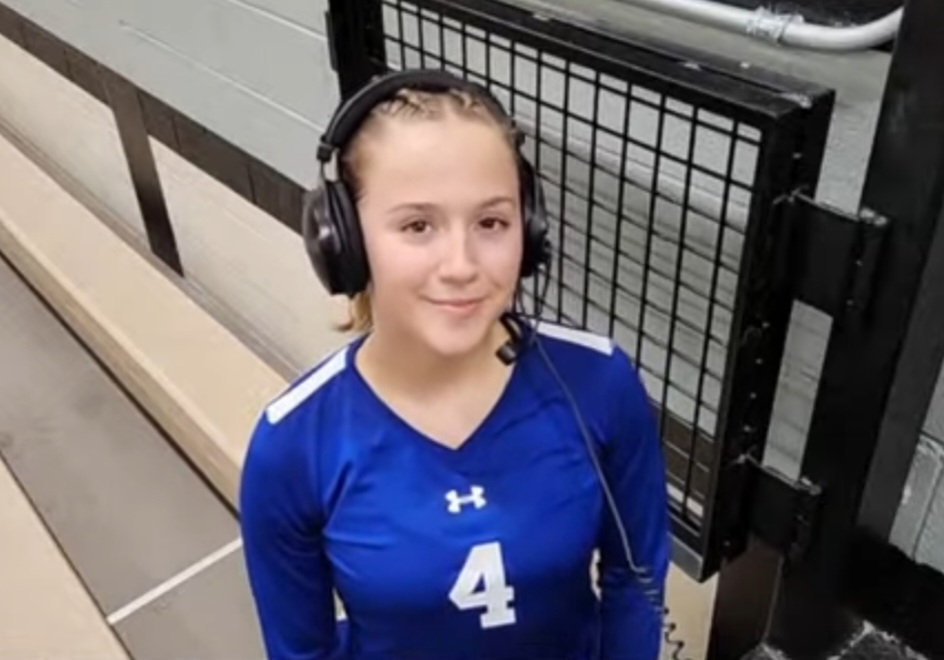 It was a matchup that saw Clarion have four set points in the opening set, only to watch Conneaut battle back and ultimately take the set, 30-28 on a Mackenzie Wensel kill. Clarion had a pair of service errors with chances to close out the set.

“There was quite a bit of hype surrounding this match,” said Conneaut coach Christine Krankota. “Clarion’s a very good team, they’re well-coached and they have players with a ton of experience in big-time matches. We understood that this was going to be a very good test for us. As the night wore on, I felt like we got more comfortable.

Kaylee Mattera sparked the offense to the tune of 17 kills, with Payten Karastury putting up a strong passing game to set up the attackers, finishing with 33 set assists.

Karastury was named the Allegheny Grille of Foxburg Player of the Match and talked about the win:

The second set started out much the same as the first, back and forth. Aryana Girvin swung big for Clarion all night to the tune of 13 kills, but it was Mattera, Sylvia Prebor, and Mackenzie Wensel that continued the attack for Conneaut, as they closed the set on an 11-5 run after it was tied at 14-14.

“Serving and passing, that’s something we’ve worked on all week and that’s one of the things we said we needed to do well to win tonight,” Mattera said. “Our serving was a little rough but it came together, our passing came together and everything came together to make it a nice win.

The third set saw Conneaut pull away, taking a commanding 20-11 lead en route to the set and match win.

“It’s a big win for us,” Krankota said. “They made us work tonight and that’s what we wanted. It’s the first time I think that we’ve played Clarion in the regular season. The girls did their job when they needed to.”

Grace Ochs finished with 25 set assists for Clarion, while Bri Pierce had 13 digs, Hadlee Campbell had seven kills and nine digs, and Marley Kline had four kills and three blocks.

“We have room for improvement,” Krankota said. “The great thing about this group is they’re not content, they’re not satisfied with where we are. They understand the only way we’re going to achieve the goals we set for ourselves at the beginning of the season is if we put the work in every single day.”

Pfaff also had eight kills and a block and was named the Allegheny Grille of Foxburg Player of the Match. She talked about the win.

Pasternak led DuBois with nine kills, including five in the third set, while Delp had six kills. Kenda Cowan also had a solid match with six kills, a solo block, and two tandem blocks.

Brockway appeared to have all the momentum after pulling away in the second set and jumping to a 10-3 lead to start the third. The Wolverines clawed their way back in it, won the set in extra points, and held off the Rovers in the fourth to win the match.

“We gave Kassidy (Orinko) a few sets, she got some kills, and we got the energy back up,” Sheffield’s Emily Foster said. “It got too close at times, but we ended up bringing in the energy back up and got the win.”

Neither team was able to gain a clear advantage through the first set. Sheffield went on a couple of short runs that gave them three or four-point leads, but Brockway fought back to keep the score within striking distance. The Rovers took a 23-22 lead but kills from Lexi Goldthwaite and Orinko gave the Wolverines set point. Goldthwaite served an ace to close out the first set win.

The teams played to a 9-9 tie in the second set. Brockway then went on an 8-1 run to take control of the set. Sheffield never got closer than five points the rest of the way as the Rovers tied the match at one set each.

Brockway was able to carry that momentum into the early part of the third set. Sophia Schmader served consecutive aces to start the set as the Rovers scored the first four points on their way to a 10-3 advantage. Sheffield responded with a 5-1 run to cut the lead to 11-8.

The Wolverines got within a point several times throughout the set, but the Rovers had an answer each time to extend the lead. An Orinko block tied the set at 19-19, and her kill on the next point gave Sheffield its first lead at 20-19. Brockway answered right back to regain a 21-20 advantage.

In the fourth set, Sheffield got out to the early lead and was up 17-12 at one point. Brockway closed the gap to 22-20 and forced the Wolverines to call a timeout with a 23-22 advantage. A Foster kill gave Sheffield match point, and an unforced error on the final point ended the match.

Peyton Wotorson had seven kills and Kadence Steffan had 38 assists and 15 digs.

Lindsey Reiter ran the offense for the Lady Dutch with 15 set assists while adding five aces.

Lilly Vincent had 13 digs in the win with Alyssa Tingley adding six aces.

Michayla Magee ran the offense for the Bears with 17 set assists and added 13 digs and three blocks.

Meadville’s Parks Earns Sept. 19-22 YDL Sports Network Volleyball Performance of the Week
Sept. 29, 2022 Volleyball and Soccer Schedule
This website or its third-party tools process personal data.In case of sale of your personal information, you may opt out by using the link Do not sell my personal information.
×
Manage consent