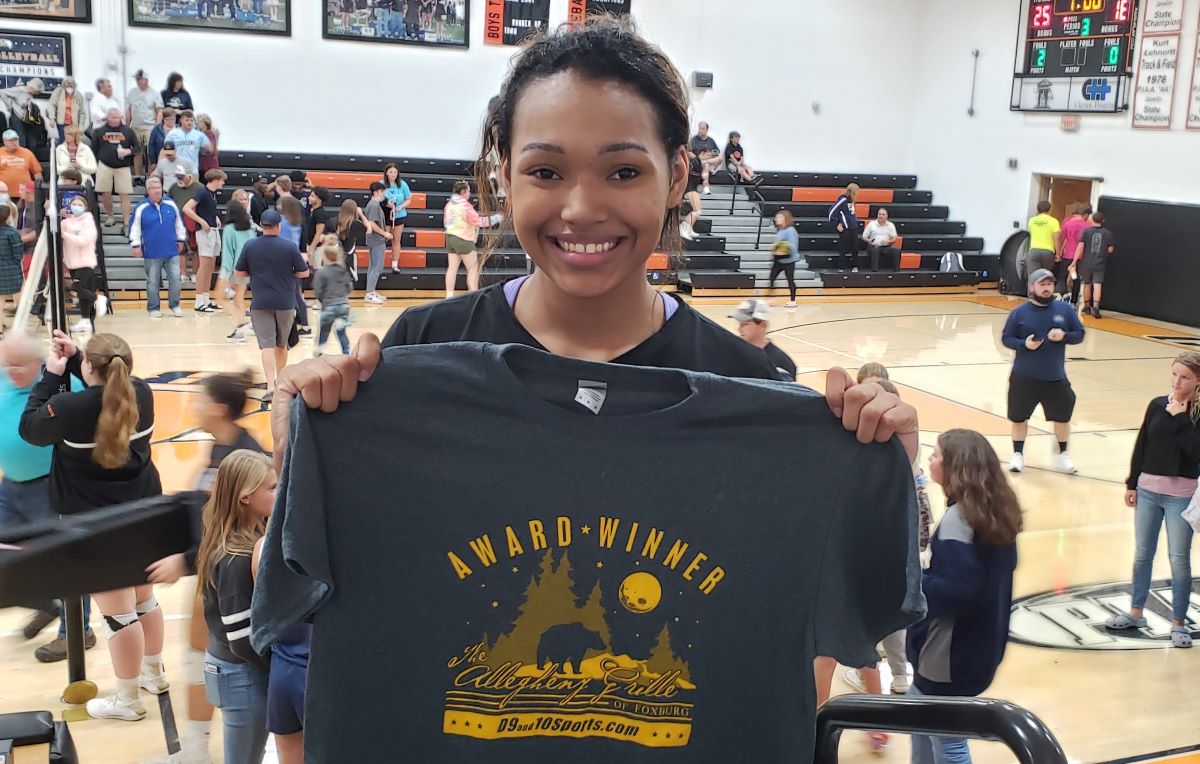 The Lady Cats served for 15 aces led by five from Burns and three each from Adia Needham and Gia Babington.

In addition, Burns had a match-high 11 kills to go with six digs, and Girvan had seven kills and seven digs and was named the Allegheny Grille of Foxburg Player of the Game.

Girvan talked about the win.

Celia Shaffer had four kills and an ace for C-L with Ruby Smith adding three kills.

Kendall Dunn ran the offense for the Lady Lions with 11 set assists while Brooke Kessler had a pair of aces.

Ferringer had nine kills and a block with Anderson adding eight kills and two digs.

Also for the Berries, Brooke Hart chipped in five kills, five digs, and a block and Mackenzie Karnes had six blocks, two kills, and two digs.

Cora Jekielek and Serrena Conklin each had four kills for Kane with Jekielek adding seven digs and Conklin tow blocks.

Anna Merry ran the offense for the Lady Terrors with 23 set assists while adding five kills, while Kate Rhinehart had three kills, seven digs, and seven aces. Brooke Close was stellar on defense with 16 digs while serving well with four aces.

Baylee Fitzimmons had 15 digs for Smethport with Alyn Thomas leading the offense with four kills and an ace while coming up with two blocks. Kaylee Swanson also had six digs and two kills, and Madi Faes chipped in nine set assists, an ace, two digs, and a block for the Lady Hubbers.

Emma Parks chipped in six kills and eight digs for the Bulldogs, while Elliott Schleicher ran the offense with 33 set assists and added eight digs.

Defensively, Meghan Willis had a team-best 20 digs for Meadville.

Danielle Griebel ran the offense for the Lady Chucks with 18 set assists and added four aces.

Rachel Brady had a match-best 20 kills to go with eight digs for Corry.

Taylor Elchynski added 15 digs for the Beavers with Makenna Moore picking up 10 digs and Halle Albers and Allison Sawyer nine digs each.

Kirah Bugbee ran the offense for Corry with 25 set assists and also had eight digs.

Liz Frame added nine set assists, a dig, and an ace in the victory with Emily Eckert recording 12 set assists.

Gregory’s Big Night Lifts DuBois to Five-Set Win at Warren
Sept. 29, 2021 Volleyball Schedule
This website or its third-party tools process personal data.In case of sale of your personal information, you may opt out by using the link Do not sell my personal information.
×
Manage consent