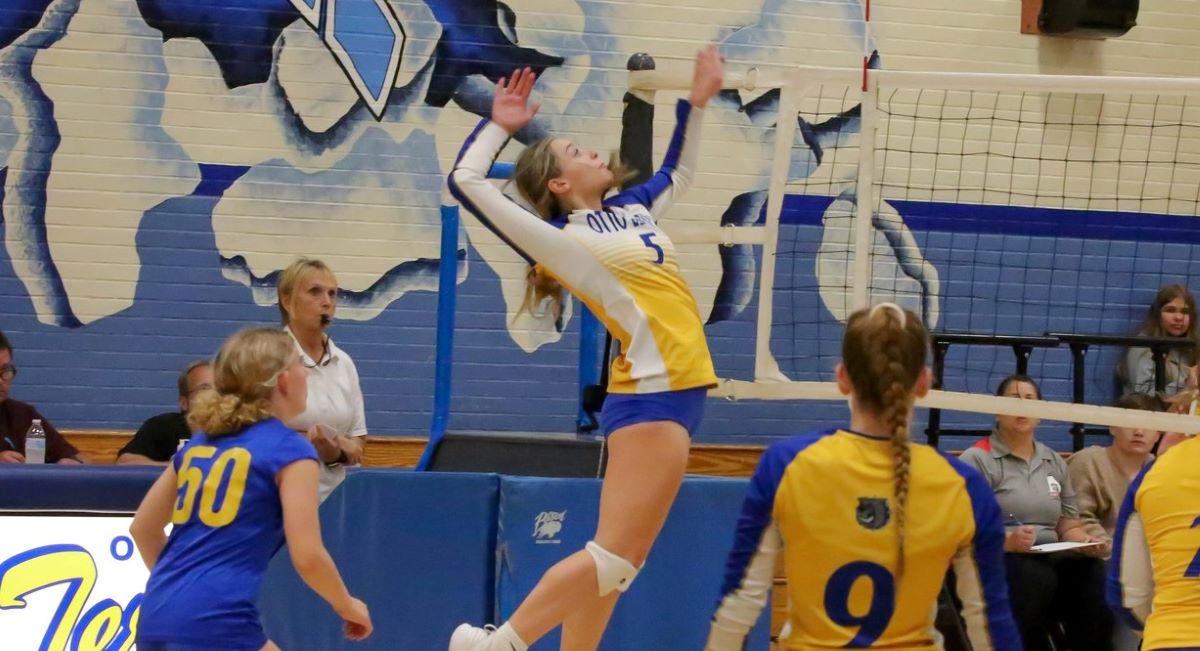 Carrie Drummond had 6 kills in Otto-Eldred's win over Smethport. Photo by Barb Close

Sheeler had a match-high 12 kills with Rhinehart adding eight kills and three aces and Drummond six kills and two aces. Sarah Beaver also had four kills and five aces for the Lady Terrors.

Baylee Fitzsimmons recorded 15 digs, including her 1,000th career digs, for Smethport. She added three aces and a set assist.

McLaughlin had a match-best 11 kills, while Greco ran the Panthers’ offense with 24 set assists and added seven digs.

Maddie Daris had eight digs for Mercer with Jillian Mount running the offense for the Mustangs with eight set assists.

Emily Eckert ran the offense for the Lady Falcons with 29 set assists and added 11 digs, two aces, and a kill.

Jade Williams had an 11-kill, 10-dig double-double for Austin with Ella Brewer chipping in 31 digs.

Marah Fowler ran the offense for the Lady Panthers with 25 set assists and also had three blocks and two kills.

Parks recorded 24 kills and 11 digs in the win, while Aubrey Decker also had five kills and Kendall Mealy 13 digs for the Bulldogs.

Also reaching double digits in digs for Meadville was Chae Kennedy with 10, and Elliott Schleicher ran the offense with 28 set assists while serving five aces.

DCC volleyball is brought to you by Pizza Hut in DuBois. Brockway volleyball is powered by Fran Morelli Sales & Service in Brockway.

Mackenzie Galdon ran the offense for the Bison with 24 set assists.

Also for the Raiders, Marissa Hillyer had seven digs and three kills, and Annie Loposky chipped in 11 set assists and two kills.

Izzy Bond added five kills for the Lady Bulldogs who also got 11 digs from Caylen Rearick and five aces and three kills from Taylor Ripple.

Hannah Hart also had 10 kills while picking up two digs for the Muskies while Morgan Bercis chipped in six kills, two blocks, and 12 digs.

Also for the Raiders, Marissa Hillyer had seven digs and three kills, and Annie Loposky chipped in 11 set assists and two kills.

Alli Macensky and Olivia Rohrbaugh each had six kills for Galeton with Macensky adding three blocks and a dig and Rohrbaugh nine digs, four aces, and a block.

Ainsley Hartle ran the offense for the She-Wolves with 20 set assists.

Kennedy Kaye and Cameron Peters paced the defense for the Lady Panthers combining for 28 digs including 16 from Kaye and 12 from Peters.

Mia Anderson added seven kills and three blocks and Cora Jekielek and Maya Smith each had six kills in the victory.

Jayna Johnson ran the Kane offense with 22 set assists while adding two aces and a block.

Also for the Ramettes, Ella Lindberg had 12 kills, 20 digs, and an ace, Maria Casilio chipped in 16 digs, and Marlee Cherry had three kills and three blocks.

Nikole McLallen and Kaylin Laird each had 10 kills for Prep with Olivia Hutchinson adding five kills.

Hailey Sliker paced the Ramblers on defense with 22 digs, and Cecelia Campbell ran the CP offense with 25 set assists while also serving six aces and coming up with 10 digs.

Lizzy Palmer added two digs, two kills, and an ace for the Lady Tide, while Savannah Carfley had six set assists and Ava Olosku two kills, a block, a dig, and an ace.

Pizza Hut Scoreboard: Sept. 27, 2022 Volleyball/Soccer
Corry VB Tops Fairview While Raising Over $1,000 for Avery’s Pawsitive Change Organization
This website or its third-party tools process personal data.In case of sale of your personal information, you may opt out by using the link Do not sell my personal information.
×
Manage consent