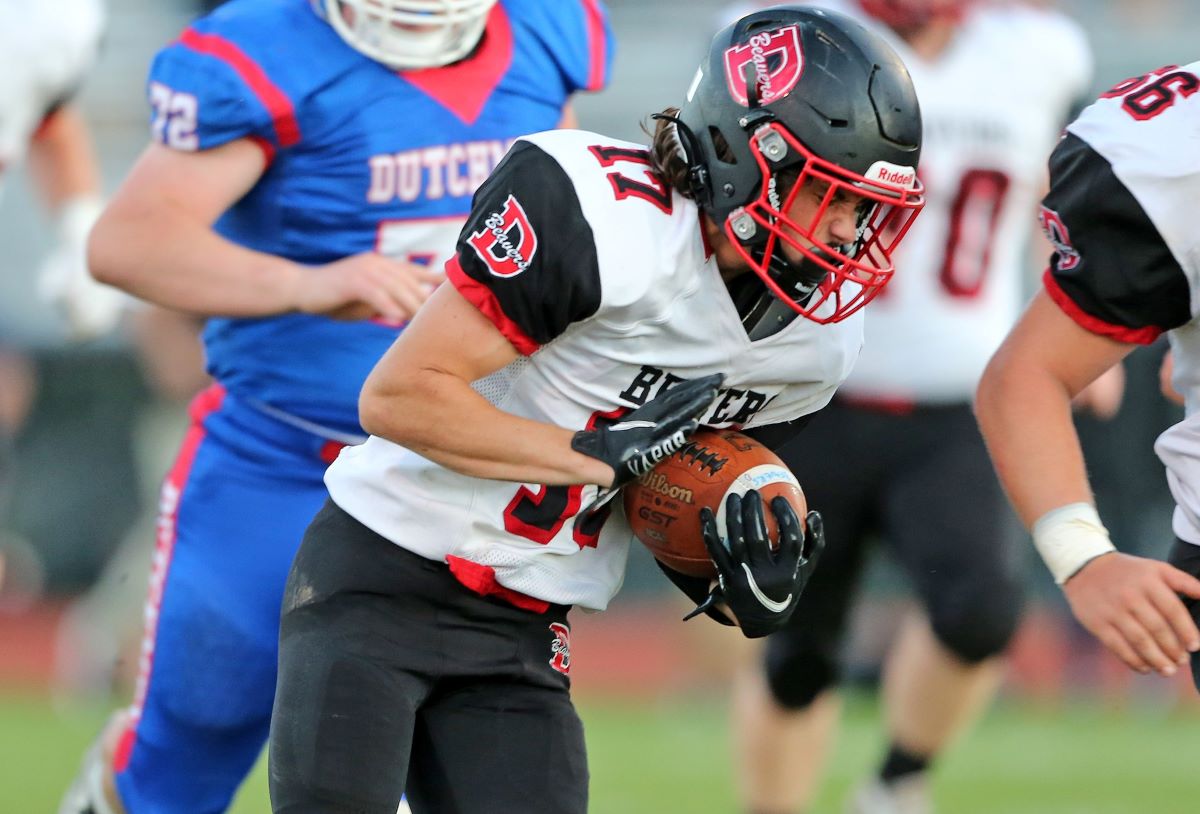 Derraick Burkett of DuBois had a pair of touchdown catches for help the Beavers stun Ridgway. Photo by Paul Burdick. Check out more of Burdick's work here

Ridgway (4-1) scored on the seventh play of the game when Cameron Larkin hit Will Howard on a 55-yard pass on third-and-eight. The Elkers failed on the two-point conversion and the closest they’d get to the end zone the rest of the way was the Beavers’ 22 yard-line.

And of the Elkers’ offensive yardage, 65 came on the opening drive and 29 came on their final possession. In between, DuBois held Ridgway to two first downs and 44 yards in six possessions.

Then the scoring closed four plays into the second half when the Beavers took the kickoff and went 58 yards, capping it with Hays’ second TD pass on a 5-yarder to Burkett.

Hays completed 7 of 8 passes for 68 yards while rushing for 30 yards on four attempts. Burkett caught four passes for 70 yards. Mitchell ran for 43 yards on 10 carries.

ST. MARYS, Pa. – St. Marys held off a wild second-half charge from visiting Central Clarion County to get a 42-39 win.

The Dutch (4-1 overall, 4-1 D9 League Large School) looked in control at halftime leading 27-12, but the Wildcats (0-4, 0-3) recovered three on-side kicks in the second half, including on the opening kickoff of the half, and forced the issue.

Down 42-26 midway through the fourth quarter, Central Clarion scored twice in a span of 1:59 to get within three but couldn’t get over the hump.

Breckin Rex’s 3-yard scoring run with 6:24 left made it 42-32, and then Jase Ferguson hit Ashton Rex with a 25-yard touchdown pass with 4:25 to play get the Wildcats within three.

Mosier caught a 72-yard touchdown pass from Coudriet, returned a kickoff 85 yards for a touchdown, and returned an interception 82 yards for a score early in the fourth quarter giving St. Marys the 42-26 lead. He caught three passes for 128 yards.

Coudriet, who also threw a 50-yard touchdown pass to Carter Chadsey, was 8 of 17 passing for 230 yards.

Alex Lukaschunis had 13 tackles, three tackles for a loss, three sacks, and a forced fumble on defense for the Dutch with Conner Straub adding 12 tackles.

Freshman Jayce Ferguson had his best game of the season for Central Clarion going 15 of 26 passing for 241 yards, four touchdowns, and two interceptions while also rushing for a touchdown.

He threw two touchdown passes to Ashton Rex and two to Christian Simko. Rex had four catches for 74 yards with Simko grabbing four passes of 95 yards.

Breckin Rex ran 23 times for 86 yards and the touchdown with Ryan Hummell adding 10 carries for 69 yards and four catches for 24 yards.

The 0-4 start marks the first time a football team representing Clarion High School (Central Clarion is a co-op between Clarion, Clarion-Limestone, and North Clarion) has started a season 0-4 since 1952 when Clarion went 0-8.

WEST SUNBURY, Pa. – Moniteau went to old-school football to outgun visiting Bradford, 44-38, and pick up its first win of the season.

The Warriors (1-3 overall, 1-3 D9 League Large School) rushed for 572 yards and five touchdowns on 73 carries on the night while throwing just one pass – a touchdown toss to boot.

Matt Martino’s 278 yards and three touchdowns on 24 carries led the way for Moniteau, while Hunter Stalker ran 33 times for 189 yards and a touchdown.

David Deccisino nearly hit the 100-yard mark rushing 11 times for 92 yards and a score while going 1 of 1 passing for 11 yards, an 11-yard touchdown pass to Cooper Boozel.

Elijah Fitton threw four touchdown passes for Bradford (0-5, 0-5) going 18 of 30 for 310 yards with an interception while also scoring on a 60-yard touchdown run.

Jerid Wilmoth also had four catches for 56 yards while the other two touchdowns were caught by Troy Adkins (2 catches, 32 yards) and Nate Girdleston (1 catch, 8 yards).

KNOX, Pa. – Outscoring Bucktail 23-0 in the second half, Keystone overcame a slow start to beat Bucktail, 29-12, and stay unbeaten.

The Panthers (4-0 overall, 3-0 D9 League South) found themselves down 12-7 at halftime after Bucktail completed a miracle pass on the last play of the half when Brody Pentz outjumped Zander McHenry and went 53 yards to the end zone off a heave from Dylan Cross.

A pair of Kyle Nellis touchdown runs late in the third quarter helped the Panthers take control of the game.

A 3-yard Hunter Shook touchdown run with 4:19 to play followed by a safety 37 seconds later set the final score.

The Bucks (0-4, 0-2) scored the game’s first touchdown when Ashton Intallura returned a fumble 80 yards for a 6-0 lead before a 1-yard Bret Wingard run gave Keystone a 7-6 lead at the end of the first quarter.

Nellis had a monster night for Keystone rushing 27 times for 203 yards. Shook added six carries for 28 yards and Wingard 13 for 14 yards. Wingard was 2 of 5 passing for 14 yards with both completions to McHenry, who also ran four times for 27 yards.

Aiden Sell had a pair of sacks on defense for the Panthers as did Nick Cosper, who also caused a fumble and had three tackles for a loss. Brock Champluvier added a sack, three TFLs, and three quarterback hurries.

SMETHPORT, Pa. – Super Lent was at it again.

Smethport’s Noah Lent accounted for 436 yards of offense and all eight of Smethport’s touchdowns in a 56-18 win over visiting Otto-Eldred that kept the Hubbers unbeaten on the year at 5-0, including 3-0 in the D9 League Small School North.

Lent ran 21 times for 277 yards and five touchdowns and was 12 of 15 passing for 159 yards and three more touchdowns.

Higley was also a stud on defense for the Hubbers with six tackles and two sacks with Keegen Watson and Logan Hurlburt also recording a pair of sacks each. Travis Cooney had an interception that set up one of Lent’s touchdown runs.

All three touchdown passes came from Oliver Billotte, who was 8 of 15 for 177 yards.

Nate Natoli added two catches for 72 yards and a touchdown, while Mark McGonigal scored twice on the ground while rushing seven times for 48 yards.

KANE, Pa. – Landon Darr had a big game for Kane in a 29-0 win over visiting Punxsutawney.

Darr caught a pair of touchdown passes – 36 and 27 yards – and also intercepted a pair of passes – one in the end zone that ended a Punxsutawney drive and another that he returned 61 yards for a score in the fourth quarter.

Ricky Zampogna added a 24-yard touchdown run for the Wolves (3-2 overall, 3-2 D9 League Large School) and also made a tackle on a safety, one of two safeties scored by Kane.

EMPORIUM, Pa. – Lathan Reed had 358 yards of total offense and scored three touchdowns to lead Cameron County to a 54-2 whitewashing of visiting Sheffield.

Maddox Baughman was 4 of 8 passing for 145 yards, a touchdown, and an interception while rushing for 84 yards on eight carries.

Colby Barr was 9 of 22 passing for 24 yards and seven interceptions for Sheffield.

Devin Streich and Cherry each had two interceptions while Rieder, Dylan Baney, and Anthony Putt each had one pick-off.

Dylan Hardwick led the Wolverines with two carries for 75 yards while adding two catches for 45 yards.

Sheffield’s lone score came when Baughman was called for intentional grounding in the end zone.

It was the eighth straight loss for the 0-5 Wolverines, who have been outscored 298 to 14 this year and 517 to 58 during the losing streak.

NEW BETHLEHEM, Pa. – Scoring 36 unanswered points in the final six minutes of the first half, Redbank Valley turned a scoreless game into a blowout on its way to a 51-0 win over visiting Brockway.

Bryson Bain threw three touchdown passes during that barrage hitting Marquese Gardlock from 8 yards out and Tate Minich from 6 and 12 yards away.

The Gardlock score started the scoring and the two Minich touchdowns ended the first half with the Mercy Rule in action.

In between, Ray Schreckengost scored on a 3-yard run and also scored on a 19-yard fumble return for a touchdown for Bulldogs (4-1 overall, 2-1 D9 League Small South).

Schreckengost’s fumble recovery came off a strip by Joe Mansfield, who nearly didn’t play in the contest after being in a car accident prior to the game, according to his mom, Jody.

RIMERSBURG, Pa. – In a game called at halftime because of a lack of healthy players for Elk County Catholic, Union rolled past the visiting Crusaders, 41-0.

ECC entered the night with just 16 players dressed and had three players injured in the opening half.

“After consulting with the officials and game management it was agreed that ECC would not be able to complete the game due to the number of available players that remained,” a statement from ECC athletic director Aaron Straub said.

Rainey scored three touchdowns in all also hauling in a 19-yard pass from Bailey Crissman and scoring on a 5-yard run. He caught two passes for 25 yards and ran five times for 26 yards.

Crissman was 4 of 10 for 54 yards, two touchdowns, and an interception also hitting Dawson Camper with a 5-yard scoring pass.

Mikey Card ran nine times for 109 yards for Union/A-C Valley, while Camper had six tackles and Hardy four on defense.

Ben Paul was 6 of 17 for 94 yards passing for ECC with four interceptions. Noah Cherry ran 10 times for 26 yards, and Joe Tettis had four catches for 78 yards. David Anderson had the interception for the Crusaders (2-2, 1-2), who didn’t play last week because of a lack of healthy players.

The Panthers (1-4) scored twice in a span of 33 seconds early in the game thanks in part to a blocked punt to set the tone.

Kainen Brown scored on a 2-yard run 4:57 seconds into the game and then Griffin Keller made it 14-0 with his own 2-yard run with 6:34 left in the opening quarter following the blocked punt, one of two that set up scores for Northern Bedford.

Brown then added a 7-yard scoring run and Aaron Bowers threw a 22-yard pass to Kain Baker to make it 28-0.

Three Dan McGarry touchdown passes in the second half weren’t enough for the Golden Tide (3-2), as Northern Bedford got another Keller touchdown run (3 yards) in the half to help hold onto the lead.

McGarry had another big game statistically going 25 of 48 for 319 yards three touchdowns and an interception.

He threw touchdown passes to Ty Terry (20 yards), Jake Mullins (80 yards), and Thad Butler (10 yards) in the second half with the latter two coming in the fourth quarter

Line Paves Way as Karns City Rolls Past Brookville in Battle of Unbeatens
Sept. 25 D10 Football: Greenville, Wilmington, McDowell Pick up Wins
This website or its third-party tools process personal data.In case of sale of your personal information, you may opt out by using the link Do not sell my personal information.
×
Manage consent