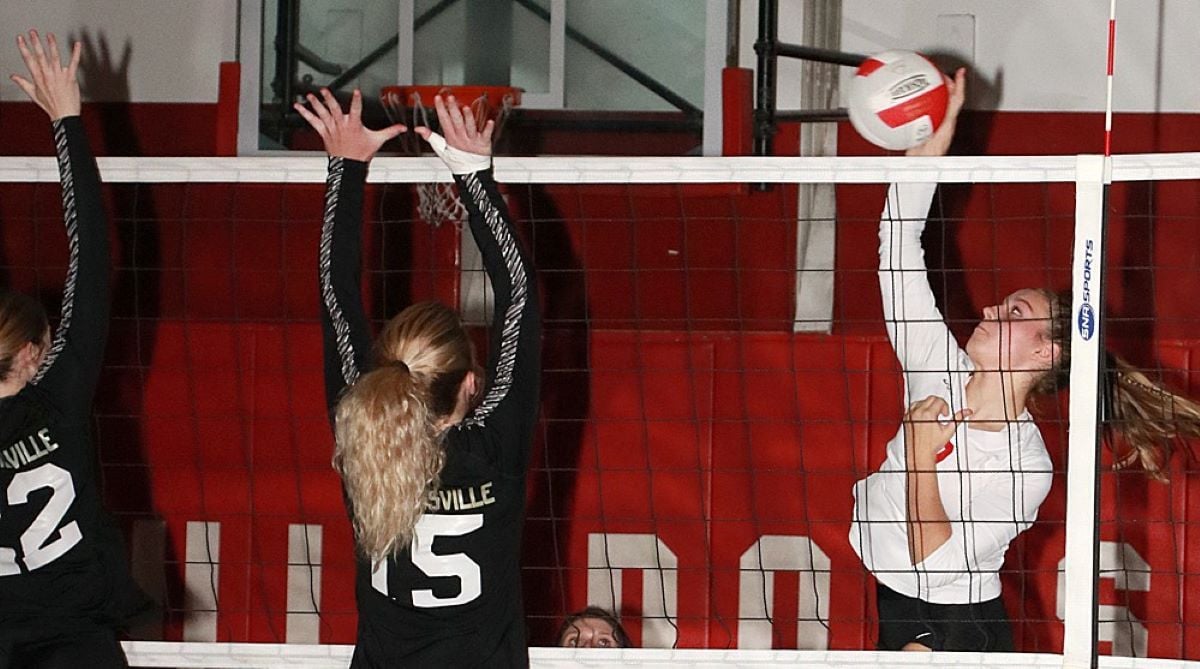 Izzy Bond added six aces and six kills for the Lady Bulldogs who also got 10 digs and three aces from Caylen Rearick.

McLaughlin had 11 kills and Arblaster 10 for the Panthers who also got seven kills from Lyndzee Amory.

Katie Sheeler added 10 kills, 16 digs, and five aces for the Lady Terrors who also got six kills and two blocks from Sarah Beaver.

Leigha Nelson ran the offense for the Lady Gators with 36 set assists.

Jennifer Blum added 12 kills for the Knights, while Gabby Lajeunesse paced the defense with 22 digs.

Sydney May ran the Franklin offense with 30 set assists.

Ruckdeschel had 15 kills and 10 digs and was supported by eight kills and 11 digs from Mackenzie Parks and eight digs from Bella Ielase.

Nicole Taylor and Rosalie Carden paced the Lady Gremlins on defense with 12 digs apiece with Carden also adding 12 set assists, a kill, and an ace. Kendall Ritzert also helped run the offense with 10 set assists while chipping in four digs and two aces.

Mook had 13 kills and 11 digs and Corwin added 11 kills and 12 digs. Mook also had eight aces with Corwin chipping in five aces.

Cassidy Swain led General McLane at the net with six blocks and also had three kills, and Bailey Cannon chipped in three kills and three aces.

Rylee Nicklas was also strong for the Lady Dutch with 16 set assists while adding five kills and three aces, and Lindsey Reiter had a double-double with 13 kills and 12 set assists while also serving four aces. Olivia Smith and Bella Field each added four kills and two blocks, and Hannah Ritter had three kills.

Lydia Sarnoski paced Bradford with six kills with Emma Swanson adding five kills. Sophia Asp had four blocks for the Lady Owls, and Maddie Dougherty and Taylor Gigliotti each had a pair of digs.

Slyvia Prebor added 11 kills and three blocks for the Eagles while Kenzie Wensel chipped in five aces and five digs.

Payton Karastury had 29 set assists to run the offense for Conneaut.

Abby King ran the offense for Johnsonburg with 20 set assists and also served a pair of aces.

Julia Seth ran the offense for the Lakers with 20 set assists and five digs.

DCC volleyball is brought to you by Pizza Hut in DuBois.

Kaylee Smith ran the offense for C-L with 14 set assists.

Michayla Magee ran the offense for the Bears with eight set assists while adding five digs.

Bryanna Mong handed out a team-high six set assists for the Lady Panthers who also got five kills from Ava Patrick.

Emily Ruter led the Lady Falcons on defense with 29 digs and added an ace, and Emily Eckert ran the Coudy offense with 32 set assists while chipping in two kills and eight digs.

Brockway volleyball is brought to you by Fran Morelli Sales and Service.

Ava Olosky added four kills and a dig for the Lady Tide who also got three aces from Alaina Reitz and three digs and an ace from Alissa Gallaher.

Ruby Singleton had a team-best 12 kills to go with two blocks for the Lady Bison who also got seven kills from Gabby Henry and five kills from Sam Campolong.

Ryleigh Fry ran the offense for the Blue Devils with 35 set assists.

Sept. 20, 2022 Soccer Recaps: Fairview Boys Edge GM; Slippery Rock, Warren Notch Shutout Wins
Sept. 21 Soccer and Volleyball Schedule
This website or its third-party tools process personal data.In case of sale of your personal information, you may opt out by using the link Do not sell my personal information.
×
Manage consent